Review: INFINITE FRONTIER #0 Is Full of Excitement and Promise!

The Journey into the Infinite Frontier has Begun!

It has been a journey going through each of the Future State titles. One would consider it a new frontier full of possibilities. But while we were focusing so much on the future, what is happening in the present? In the wake of Dark Nights Death Metal, the heroes and villains unite to create a new station to protect the world from future cosmic threats. They also use it as a staging ground to map out this new multiverse. While this new infinite frontier is laid out before our heroes and villains, only one question remains. Where do we start? 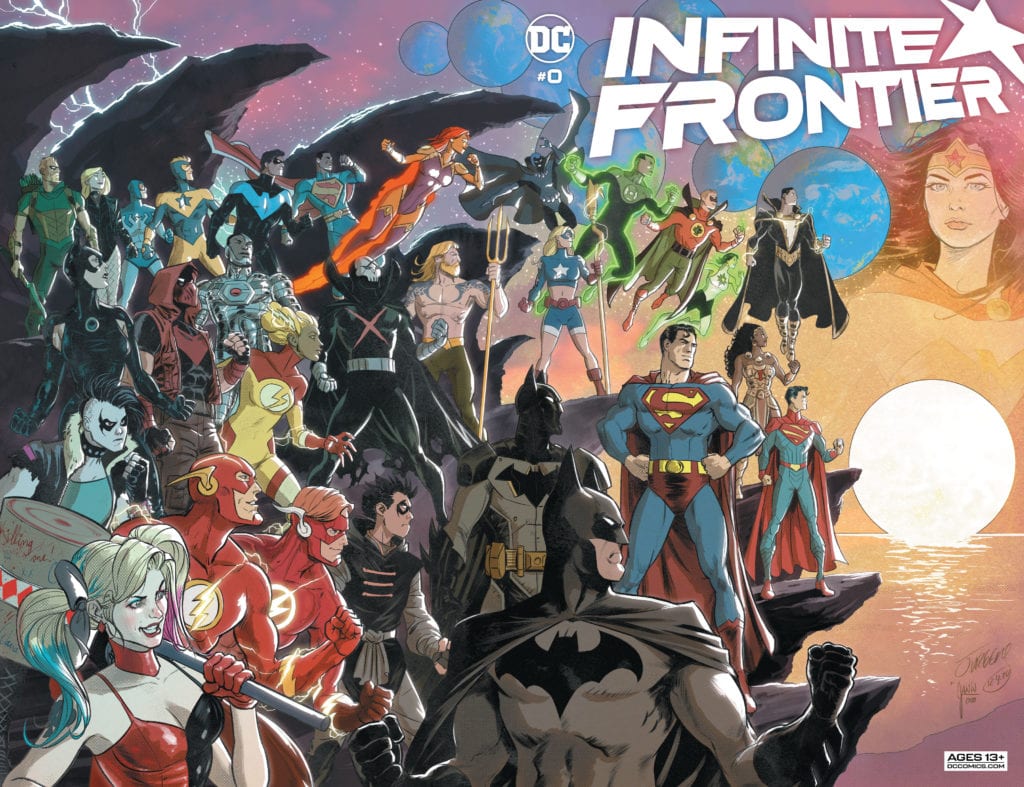 We open with the multiverse reforming and Wonder Woman popping out near the center of it. As she gets her bearings, she is greeted by the Quintessence, the group of god-like entities observing the DC heroes. One of the entities, The Spectre, explains that she has been chosen to join their ranks because of her bravery during Death Metal. While she is flattered by the offer, Diana is hesitant. To help sway her choice, The Spectre offers to show her what has happened that has started since the new era began. There the pair travel across this new frontier, seeing what the heroes are up to. 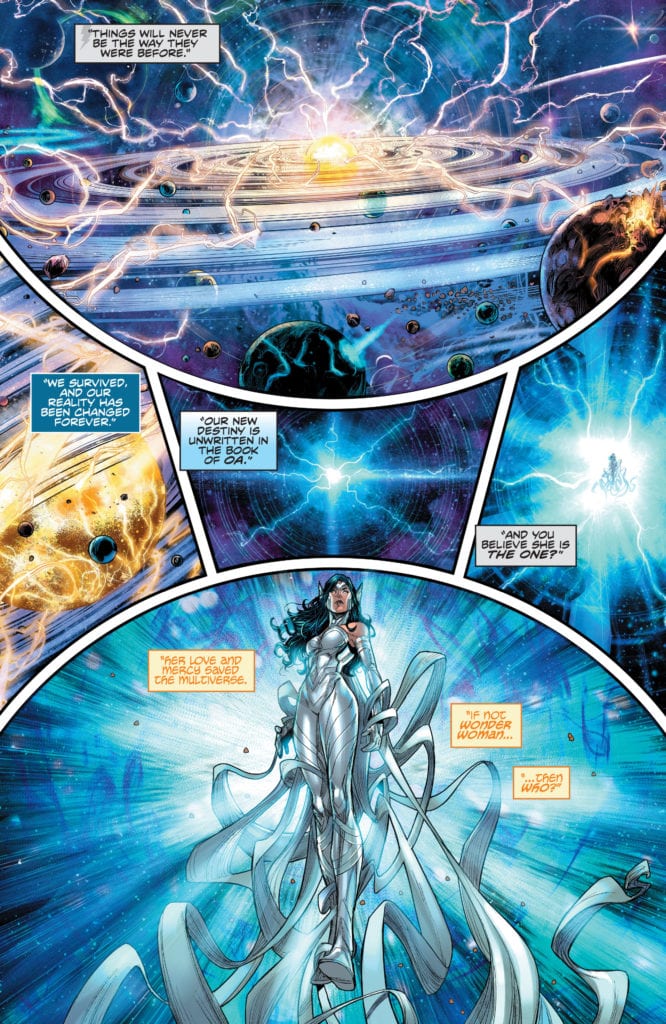 The problem with writing this review is that there is A TON of stuff that is revealed. The Quintessence is only a framing device for an issue dedicated to setting up the new comic arcs. We see the beginnings of the next incarnation of the Justice League, Barry giving Wally the title of The Flash, The Justice Society coming back into play, and so much more. It’s honestly really overwhelming trying to keep track of it all.

The strongest pitch, and the one with two sections of the issue dedicated to it, was the Batman set-up. We see our next antagonist step into the spotlight with an explosive plot that continues to reshape Gotham. What’s coming up will be divisive, as this can be seen as a board clear to tradition. This reviewer, however, is intrigued, to say the least. 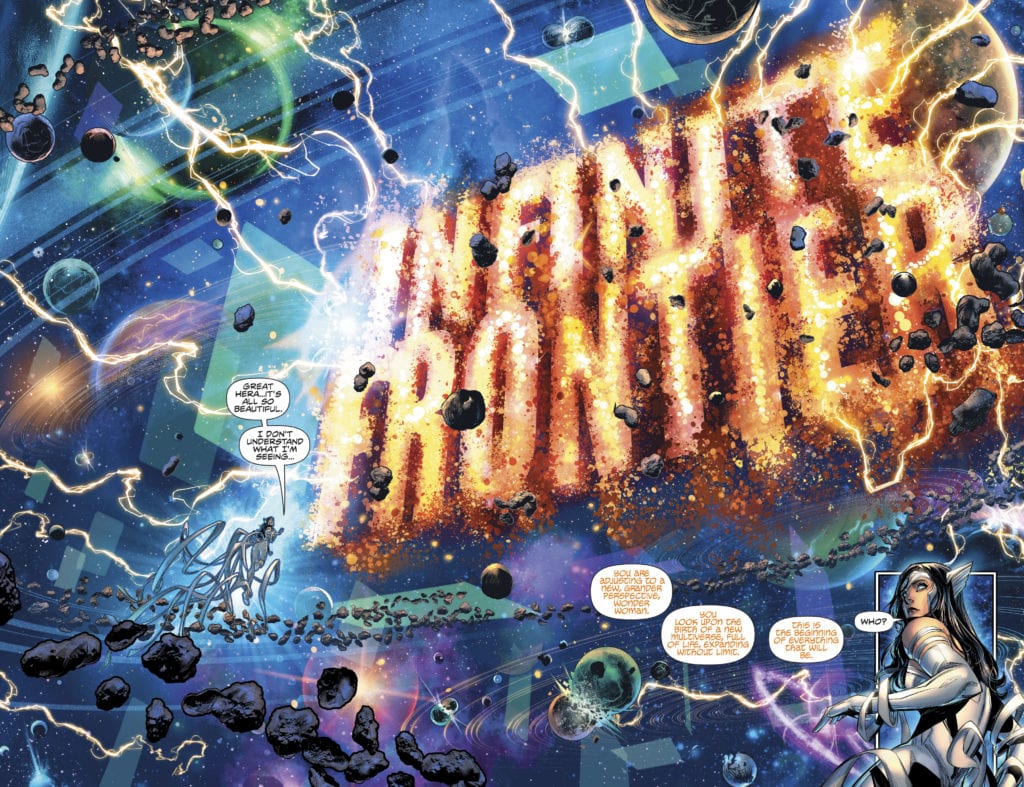 There are a plethora of art teams, each bringing their own unique styles to the tales they are presenting. No two stories look the same, and it just shows how diverse these stories really are.

The highlights of the bunch would be Dave Marquez with Justice League, Stephen Byrne with Alan Scott’s story, and John Timms with the framing story. Dave’s take on the Justice League is simplistic, relying more on more traditional designs to bring people in. The same can be said with Alan Scott’s Story, leaning towards traditional design and softer colors to help deliver a more personal story. Finally, we have Timms work for the framing story, and honestly, it’s cosmically brilliant. He is able to truly capture the size of the story with mind-blowing visuals, such as Wonder Woman and Spectre speaking to one another while looking down upon several adventures happening at the same time. The overall art is well done, but those three should provide hope for the coming series. 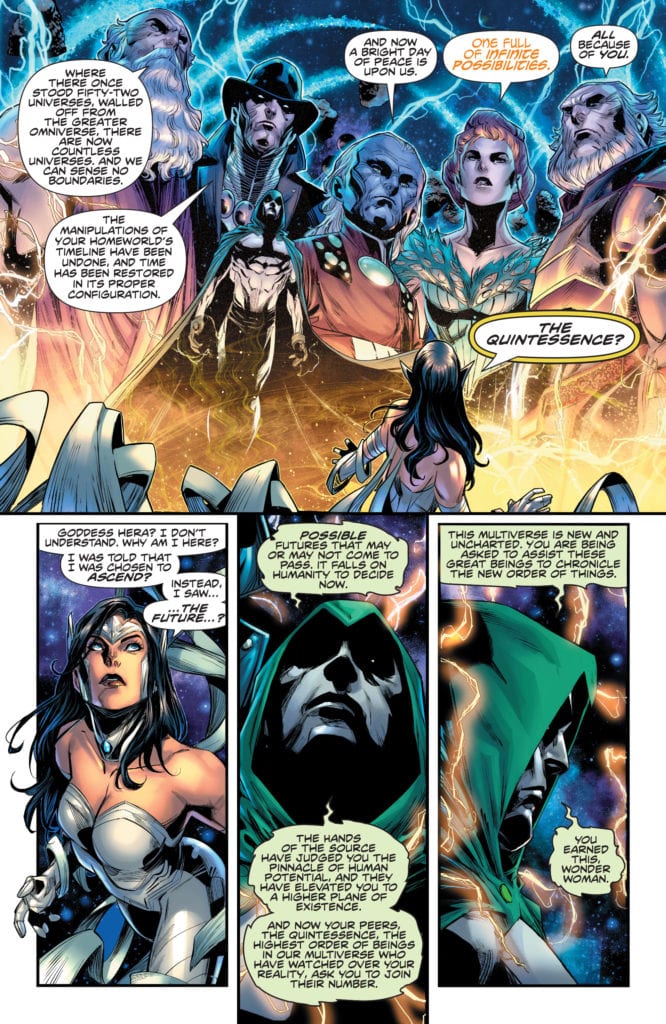 Overall this bombastic first step into the Infinite Frontier is an interesting one. We get a ton of peeks into the coming stories, promising new adventures for fan-favorite characters. The art for each story fits perfectly and would get any reader excited. The only complaint I actually have is the fact that it can be a tad overwhelming. This comes with every DC era start, but it really never gets easy. That doesn’t mean I personally didn’t have a good time, just be careful if you’re looking for one particular story.

Infinite Frontier #0 is a great, albeit overwhelming stepping-off point into this new era of DC.Review: INFINITE FRONTIER #0 Is Full of Excitement and Promise!