This week I’m focusing on The New Mutants #22. In this issue, superstars Chris Claremont and Bill Sienkiewicz co-headline a tale involving the New Mutants doing some danger room training. Night Crawler and Colossus make an appearance. Sunspot joins the Hellfire Club. And Wolfsbane writes a fairy tale. The story is classic Claremont and the setting and details allow Sienkiewicz to weave his surreal illustrative magic. Anyway, let’s jump right in and look at it! 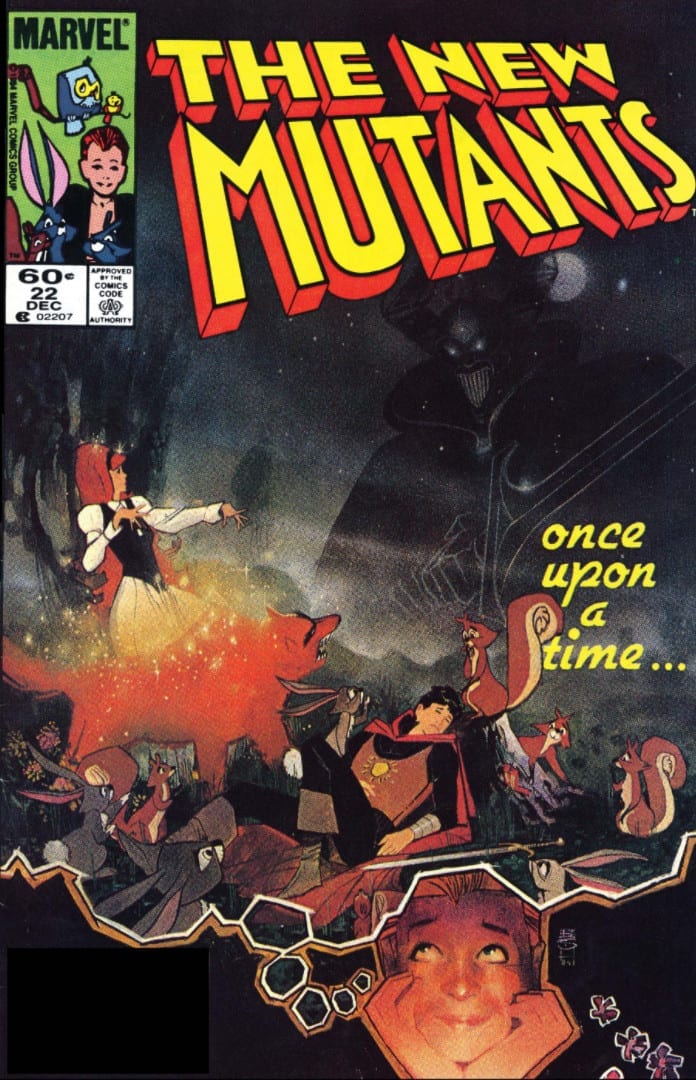 Here is my picture of the actual book. For a dollar bin book, it’s in great condition. Not that it matters much in the case of a buck, but when you got a Sienkiewicz cover, you want it as best as can be!

One cool thing I wanted to highlight is the entire credits list for this issue. Notice the comic being called a ‘Production’. Paired with the ‘Once Upon a Time…’ on the cover it adds a total fairy tale vibe.

Also, that’s a who’s who of talent in this book. All the way to the editors.  Ann Nocenti, the editor, also had a super great run on Daredevil. And EiC Jim Shooter is well, a huge part of comics history. He started writing as a teenager, was EiC at both Marvel and DC and helped make Valiant popular in the 90s.

Part of the fun of combing through these books is also some of the ads of course. Here’s one for Mario Bros. for the Atari!  The ad is even a comic!

Alright onto some pages of the actual book. This comic is printed on newsprint, so these images have a very specific look and feel in the physical form. As awesome it looks here, flipping through the pages of Sienkiewicz art is even better. It reads well too as a one-off, which is a feat considering how dense Claremont’s stories have always been. Just take notice of all the lettering needed. That’s solid work by letterer Tom Orzechowski.

Alright time to highlight another ad. Here’s one for Marvel’s line of ‘Secret Wars’ toys. These figures were some of the first comic book toys for a lot of folks (definitely for me). Again love how the ad uses the language of comics. These kinds of ads are all over the place in old comics.

These series of pin-up style pages by Sienkiewicz are worth the dollar just by themselves. Enjoy!

Let’s end it with this cool Marvel Subscription page. Back then you could have these comics sent to your friggin’ mailbox at 16 issues for $6:50! Hell yeah!