Hey DC, Marvel! Where Are All The Kids Comics?

So during one of my weekly comic book buying binges at my local comic book shop, I came to a disturbing realization. It was when I was flipping through some of the more recent stories I love that I discovered something.  With all the violence, gore, sexual discussion, and graphic content super hero comics aren’t really for kids anymore.

I’m not saying that super hero comics are more adult. They’ve had more adult story lines and topics since the seventies. I’m saying that they really aren’t for kids anymore. The two big companies (DC and Marvel) don’t seem interested in attracting a younger demographic. The latest trend both companies are invested in is creating more comics that are fishing for the millennial demographic. That is to say, more comics are geared and reworked to have characters that are social network savvy, have strong feelings about injustices in the world, and have a more diverse element. One only needs to look at Marvel’s newest launch to see that is the latest trend. And there’s nothing wrong with trying to attract that group, as it’s a growing market. But, all I’m asking is why can’t we also see more comics that are for children?

Now, to be fair, there are some comics for kids on the stands now. It’s just that they are “tie in” comics for Marvel shows, Ultimate Spider-Man and Avengers Assemble. Tie in comics are a staple in the industry, and don’t necessarily indicate quality. However, these particular comics are notorious for simply taking screen shots from the show, paste them into comic panels, and then add word bubbles. They aren’t even new stories, they rehash episodes of the cartoon shows.

Something that lazy just shows that Marvel doesn’t care about attracting an adolescent audience. They don’t want kids comics on the stands, because they’re probably worried that they won’t sell. Which sadly is true, kids comics will generally sell less than regular comics. But, I think that this could be solved by a few changes in a promotional sense. DC and Marvel could do more to expand on their current children’s line. Perhaps instead of rehashing the same stories, Marvel could hire better artists and writers to create new stories. Come on Marvel, you’ve got Disney money, don’t tell us you can’t hire people to create a children’s oriented Avengers book. In fact you did it in the past with Marvel Adventures book. If you don’t know, those were great, funny self-contained books that were easy to read and weren’t bogged down by continuity. They weren’t directly connected to the main universe, so they were wonderful for kids to jump into.

And DC isn’t off the hook on this either. Sure they’ve had awesome kid’s comics in the past like Tiny Titans, Li’l Gotham, and Scooby Doo comics. But, they’ve all been canceled quickly after they debut. This comes back to a lack of promotion on the genre. There’s a weird thought process that comics aimed for children are somehow beneath the medium. Which is ridiculous, because kids are literally a growing market. Comics are filled with concepts and characters kids would be interested in reading. 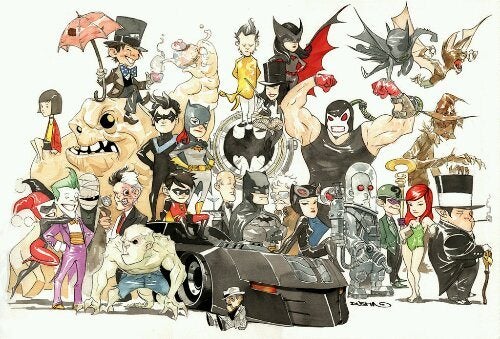 Although, it’s a little unfair to place all the blame on the companies. Comic book stores aren’t showing off the few kids comics that are out now. My favorite comic book stores usually only have one shelf for kid’s stories located away from the main books. Perhaps if they helped in trying to get children to buy comics, DC and Marvel will want to try harder to create better stories.

It’s hard to say who’s at fault for the lack of children’s super hero comic books. However, despite some adult content in comics, there are now stories that are inclusive fore all ages. JLA #1, Batgirl, Ant-Man, Starfire, and Ms. Marvel can be enjoyed by any audience member regardless of age. So, maybe we should be asking creators, and companies to craft more stories that can be enjoyed by everyone. However, that doesn’t mean we can’t have kids comics either. It’s seems silly to completely ignore the children’s demographic, especially since they are the future of comic book readers. We need more kids comics, and we need them soon.