Review: Ghost Stories in HELLBOY & THE BPRD: THE SECRET OF CHESBRO HOUSE #1

It’s hard to judge Dark Horse Comics’ Hellboy & the BPRD: The Secret of Chesbro House #1 by typical standards. As a comic, it’s just not typical in its storytelling and structure. Where many creative teams avoid things like exposition dumps, this story is deliberately full of them. But writers Mike Mignola and Christopher Golden, with artist Shawn McManus, colorist Dave Stewart, and letterer Clem Robins, are bringing us back to older forms of storytelling.

Mignola and Golden don’t shy away from exposition in this issue. In fact, that’s what most of this issue is. It’s a cast of characters that walk into the scene and begin to explain what they know. It’s a revolving door of exposition dumps. But while it’s tempting to fault the comic for this at first, something about its shameless use of this format suggests it’s not a mistake.

No, it seems that Mignola and Golden are using this Hellboy story to connect us back to how stories used to be told. Like ghost stories swapped around a campfire, this issue feels mythological. We don’t see events, we hear secondhand accounts of rumors of what happened. Mignola and Golden create a narrative distance. This is a technique Mignola often uses in his Hellboy universe. In telling us all of our information through people who weren’t there to witness things, Mignola and Golden add in a layer of mystery and ambiguity. And as the issue closes, we begin to question everything we’ve heard.

McManus’ style is quite an interesting match for this issue. His “casting” of characters is fantastic. Along with Hellboy, we have a short caretaker, with a brow that bulges out grotesquely, a buttoned-up old woman whose whole facial structure screams “I’m better than this,” and a young couple that seem picturesque and ideal. Not only do the physical aspects of these characters tell us so much about them, but it gives events a cartoony feeling. McManus cuts through the horror and dread. He brings a levity to our spooky setting. But he can turn on a dime. One moment, he’ll make you laugh, the next, with the slightest shift, he’ll make you recoil in terror. 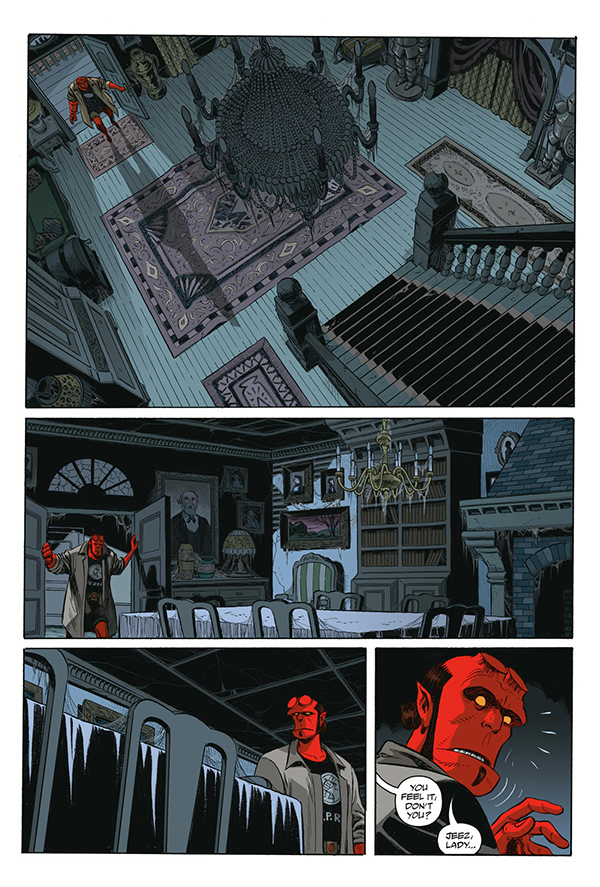 Stewart sets the stage beautifully for events to unfold. Chesbro House is devoid of life. As Hellboy enters the front door, he’s the only source of color in the scene. Everything else is a cold blue or grey. And as the characters gather around and tell each other what they’ve heard about the house, their retellings get different treatments by Stewart. The first has a soft red tone to it. The events of that account feel seedy, but perhaps not altogether evil. Another retelling, maybe the most realistic of them, is shown in grey with yellow accents. Stewart makes it feel more real, less dramatic. And the final retelling is in a dark red. It is full of violence and theatrics. Thanks to Stewart, each story not only has its own series of events, but its own unique, overpowering flavor. 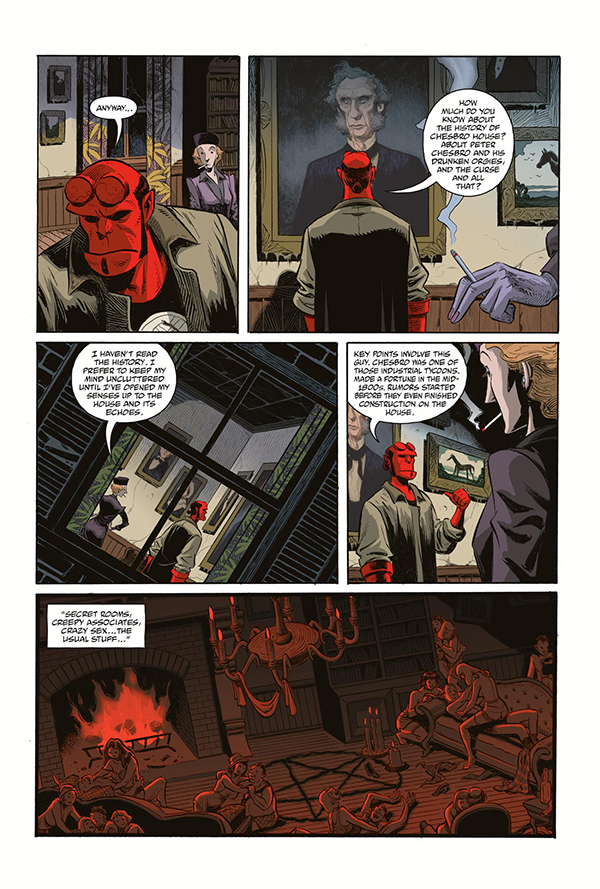 Much of the lettering of this issue is rather reserved. Even Robins’ use of bold is deliberate and carefully parsed out. But as the ghosts and ghouls gear up to cause havoc, so does Robins. The pages that were once filled with conservative text boxes and word balloons are soon covered in big, blocky sound effects of all shapes and sizes. We see the thin lettering of the “FWOOSH” sound of flames going out and the squashed block letters of a head hitting the floor with a “PLOP.” Robins’ chaotic style mirrors the feeling of what is going on in the room. And with slight distortions of word balloons and a final use of bold, he makes our hearts drop. Robins brings the order and chaos into this issue, often mixing the two joyfully.