Gwenpool Strikes Back #1 is out August 7th, but thanks to Marvel Comics, Monkeys Fighting Robots has an exclusive first-look at the book, as well as an interview with writer Leah Williams and artist David Baldeon.

About the five-issue series:
POOL’S OUT FOR SUMMER! That’s right — everyone’s favorite comics-fan-turned-comics character is back, and this time, she’s playing for keeps! Gwen Poole is desperate not to disappear into comic book limbo, so she’s going to make an impact on the Marvel Universe! First up: Unmask Spider-Man! And heck, maybe see if she can get some real super-powers while she’s at it!

Gwenpool first appeared in 2015 on a variant cover for Deadpool’s Secret Secret Wars #2 designed by Chris Bachalo. She became an immediate fan-favorite, and was given her own series later that same year. She has since appeared in a number of other Marvel series, most notably as a member of the West Coast Avengers.

Carry on to read our interview with Leah and David, and to get your first look at GWENPOOL STRIKES BACK:

Monkeys Fighting Robots: We know Gwen is going to try and unmask Spider-Man in the new series. What else can you tell us about the series? What other hijinks should fans expect?

Leah Williams: ”Expect the unexpected” is such a cop-out answer but it’s Gwenpool so it feels especially, urgently true in this case. I am writing this miniseries, but I do not feel like I am remotely in control of Gwen’s actions. I feel like I’m the person recording them. She’s captaining this miniseries, not the creative team. The choices she’s making are about her survival in this world, so she’s orchestrating optics that are wild beyond belief—she’s art directing her own covers in this miniseries. Fans should expect maximum hijinks and max earnestness. Gwen’s in a rough spot, honestly, but it’s not her fault. We’re not pulling any emotional punches and shying away from how this is making her feel.

MFR: What sets this series apart from Gwen’s previous series?

LW: Gwen’s a real person—she’s from our world. Like us, she carries the sum total of her life experiences at all times. In Earth 616, she carries the sum total of her appearances. Every book with Gwenpool adds to the snowball effect of her growing up and adapting to life inside Marvel comics. This miniseries is “go big or get retconned” for her because there are forces outside her control—within Marvel—working against her. So we’re catching Gwen at a time when she is literally fighting for her survival, fighting for her right to exist. She’s angry, she’s hurting, but…it’s Gwen. She loves us, loves comics, and is an earnest goofball. She wants to stay. She wants to be good. She’s also looking at things like sales figures for each of her books, and adjusting her own optics accordingly.

MFR: David, what are the artistic elements that make up Gwenpool? Like Spider-Man is all loose, The Thing is ridged, etc. What do you try to capture when drawing Gwen?

David Baldeon: Gwen is a tricky one to get, art-wise. Any other character has a very defined body language and, say, “style” to their art. As you say, Spider-Man is loose and all that. But Gwen… She is not just one thing. She’s a bit awkward, but also very relaxed. She has humor, but it takes a thousand different tones and covers a thousand different feelings. She’s not just the one thing. But then again, as Leah points out, Gwen is a person rather than a character. Spider-Man and the Thing and all these guys… You can trust that a certain couple strokes will be enough for the readers to understand certain things because, well, there’s an understanding on certain graphic cues built up for decades. But Gwen is another thing entirely. It’s not as much about imbuing her with a personality as it is about correctly capturing a lot of the stuff going on with her. Because of her very nature as an exile of our reality, one really needs to change the point of view ever so slightly so she does not get watered down. She is an entirely different creature, a completely new and very complex challenge altogether.

And then there’s the comic book language part. There is A LOT that Gwen (and Leah and Jordan!) is allowing me to do and explore and panic about a little, when it comen to twisting and squeezing out the possibilities of the comic book page… I had never had a chance like this one. This is not the way I usually deal with pages, narration wise. I try to be as inconspicuous as possible as a narrator, just picking the tone and the narrative tools that best suit the character and the story… But here’s Gwen that needs -or rather, demands- to make it explicit that we’re in a comic book. That she is in a comic book, that she knows and uses that fact, and that it must be felt in every page that that veil is thin and she can easily break it. It’s exhilarating, and I’m very much enjoying to explore that part of the book. Or rather, I’m enjoying Gwen grabbing my hand and giving me a tour of that part of the book!

MFR: How do you think Gwenpool was able to go from a variant cover one-off to a fan-favorite character with her own series? What about her speaks to you as a creator?

LW: Gwendolyn Poole went from a variant cover to becoming Gwenpool; the people’s champion of Marvel characters because Chris Bachalo designed that cover initially. Like, full stop. Chris has this uncanny ability to draw things that are stunningly expressive and that cover tapped into a zeitgeist of something unfulfilled that Marvel had been lacking up to that point—I never really know how to describe the kind of alchemical magic that happens within fandom, but that’s what happened there. And then, she became our champion because she’s one of us—meaning, a comics fan. She’s the only person in Earth 616 capable of listening to fans and making changes within the canon as a result. She’s not listening to me, David, Jordan, C.B., or anyone else working with her. She’s gone rogue within the pages of Marvel comics.

MFR: Gwen and Deadpool both are cut from similar cloths and both have cult followings, and yet Gwen feels unique in her own right. What do you think makes her more than just a female Wade Wilson?

LW: “Girl Deadpool” or “Deadpool lite” is my litmus test for who’s read her books or not. That sounds bad and gatekeeper-y (because it is) but I really just don’t understand how anyone can read Christopher Hastings’ and Gurihiru’s stunning work with her in Gwen’s first solo run, The Unbelievable Gwenpool, and still reduce her to that. Wade Wilson is a comics character. Gwendolyn Poole is person.

MFR: How would you define the comedy of Gwenpool?

LW: Gen Z. Gwen’s gen z, and she grew up entrenched in internet culture so her humor is absurdist, Dadaist, and almost casually nihilist. But in Gwen’s age group she’d be called “meme trash” for the very same humor. It comes naturally to her as it does to a lot of Gen Z. They are a generation of Americans unlike anything we’ve ever seen before because they have an unparalleled understanding of the world informed by constant, unqualified access to high-speed internet. They are smarter and more adept, and in a way that’ll make (us) millennials look like dinosaurs by the time they’re entering the work-force. But this knowledgeability comes with a price, because staying informed means they’ve grown up with an understanding of how constantly dire world events are, and how much of the world is suffering all at the same time. Gen Z is anxious and depressed, and they are valid for that. They all go to school wondering if it’s their turn to get shot by a classmate that day. Humor is very much a powerful coping mechanism for them, and it’s something that edges past the widely-accepted understanding of how bleak modern life is, right on into making each other laugh about it as praxis. It’s dark and joyful at the same time. The stuff Gwen jokes about isn’t funny at all, but her desire to make the reader happy—make us laugh despite how bad the situation is—is sincere as hell. The tl;dr of what I just said is that Deadpool references memes; Gwenpool makes the memes. She’s the only sh*tposter operating within Earth-616. And she knows exactly what she’s doing. 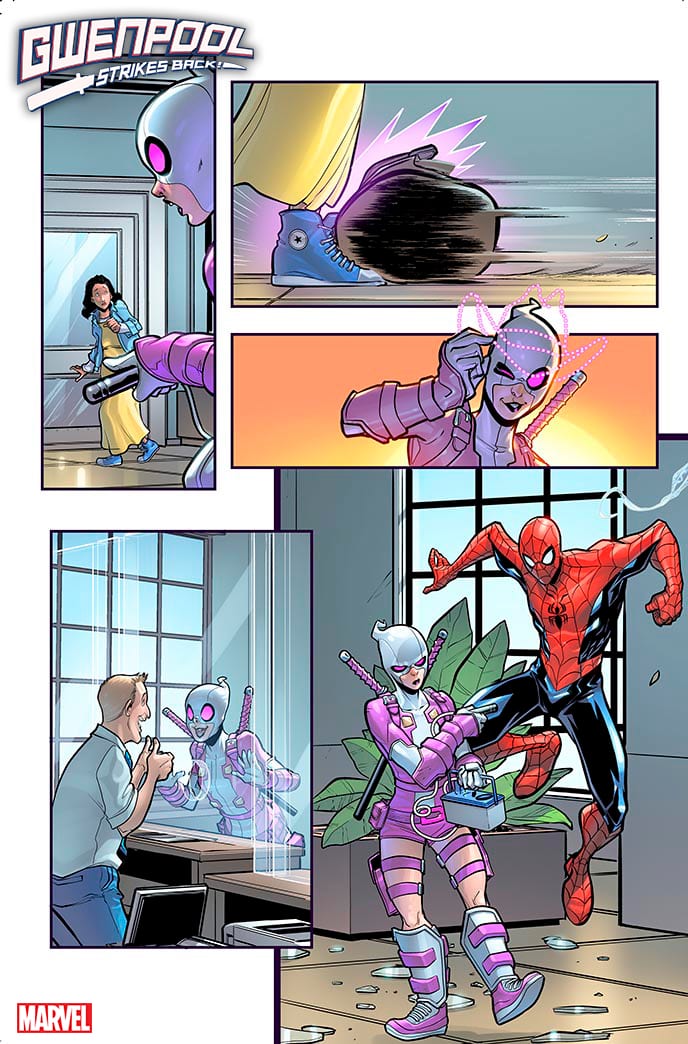 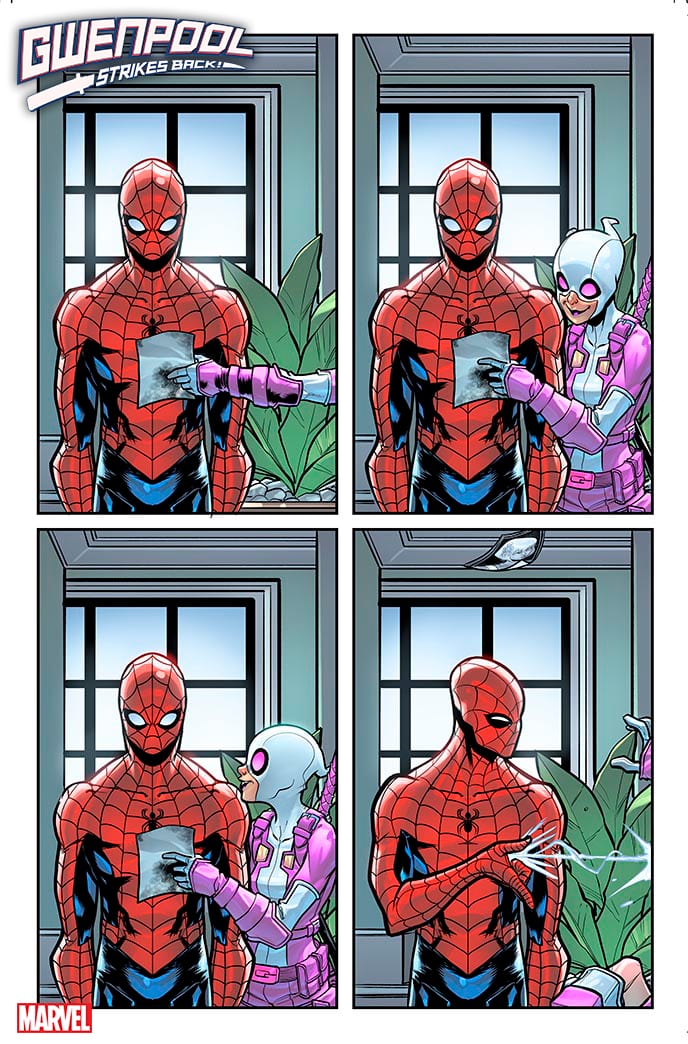 Are you excited for Gwenpool Strikes Back? Comment and let us know your thoughts!