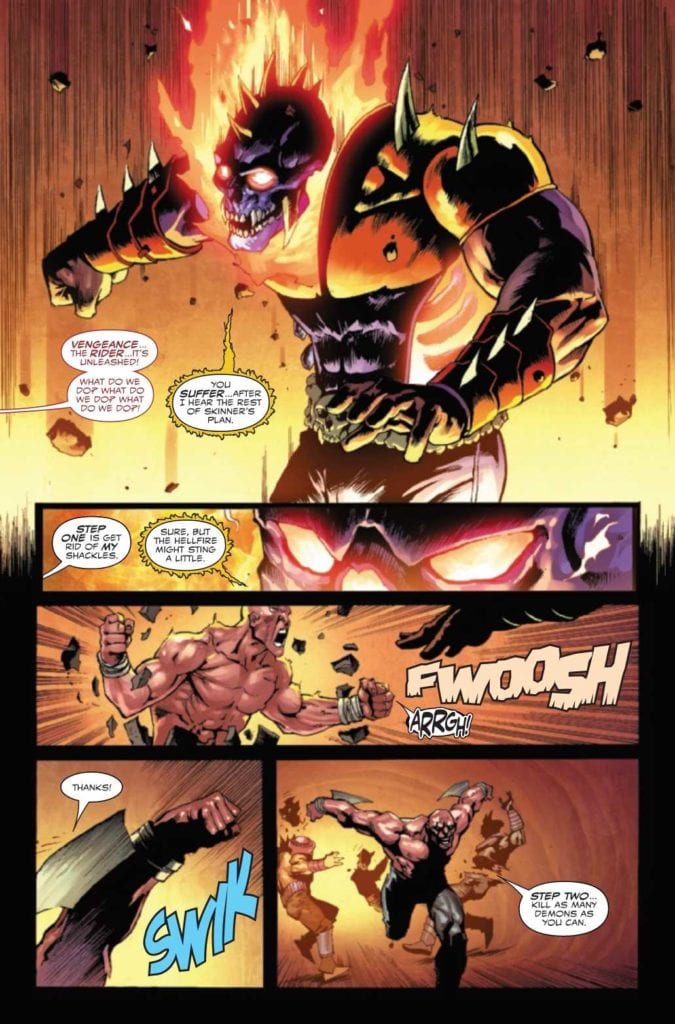 Michael Badilino/Vengeance (as his name suggests) is a Spirit of Vengeance, much like the Ghost Riders. Originally appearing as a co-star with the Danny Ketch Ghost Rider, he was killed in battle along with their mutual enemy Hellgate.

Ghost Rider Return of Vengeance #1: Bat Out of Hell

With current Ghost Rider comics in demand by creators, now seems like a great time to revisit some elements. Mackie keeps things simple in Ghost Rider Return of Vengeance #1 while getting readers up to speed. By showing Badilino in the lowest part of Hell, readers surmise his character without exposition.

From beginning to end, Vengeance shows himself off as a Punisher-esque anti-hero. The guy flat out admits he has no humanity. With his return, now’s a good time for readers to witness the manhunting days of the Spirit of Vengeance; that is if they don’t mind continuity errors. Besides the more enjoyable parts of this one-shot come from Badilino giving villains vicious payback after enduring their cruelty.

Saltares gives a fittingly hellish aesthetic to Ghost Rider Return of Vengeance #1. Just the new design of Vengeance displays the overall menace. The spiky armor with no chains or leather presents him as a direct product of Hell. There are no ties back to the main Ghost Riders, only a fury that goes in every possible direction.

The inking shared between Saltares and Deering attests to this even further by blurring Vengeance’s linework. This makes him look more spectral, which adds to his already threatening visage.

The colors by Prianto are best when looking at the end of Ghost Rider Return of Vengeance #1. With so many reds, oranges, and flesh colors in Hell, Vengeance’s appearance on Earth is what makes him stand out. This return signals a Hellish monster ready to wreak havoc on Earth’s sinful.

VC’s Sabino meanwhile demonstrates how each of Vengeance’s actions is a force of reckoning; between the SFX and flame-bordered word balloons, Vengeance is not a character to take lightly.

After two-and-a-half decades, readers are ready for a good old-fashioned Ghost Rider romp. No big internal battles for Hell, just giving the sinful a beatdown courtesy of a morally questionable. Because when a plot is manifesting, it’s good to have some alternatives. Ghost Rider Return of Vengeance #1 is certainly good enough to get attention from casual readers.