Whatnot Publishing is relaunching HEAVY METAL MAGAZINE in February with Vol. 2 #1, and thanks to the publisher, Monkeys Fighting Robots has an exclusive five-page preview of CYBERARCHY for our readers. Kim Jung Gi passed away on October 3, and the cover below is his final contribution to HEAVY METAL. 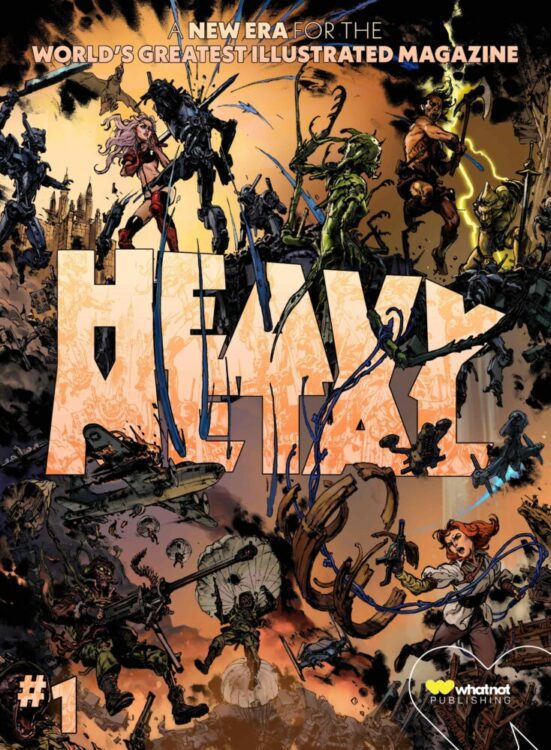 CYBERARCHY is written by Matt Hardy, with art by Clark Bint, and letter work by Rob Jones.

About CYBERARCHY:
The series is a galaxy-spanning saga that asks the question,  “what would happen to an advanced society utterly dependent on Artificial intelligence if those AIs just…stopped?”

Societal chaos and collapse ensue, all under the watchful gaze of two mysterious robots, Rust and Ash. Is this the result of a breakdown of unquestioned reliance on technology or have events been orchestrated by an outside force? What is the promise of Cyberarchy, the nature of the truth about machine life that has resulted in the abandonment of their organic masters?

Each chapter of CYBERARCHY looks at the final days of a different technologically advanced world, all envisioned in the detailed monochrome art of Clark Bint (Killtopia). Clark’s designs for CYBERARCHY were “inspired by 1930s TV serials mixed with vintage robot toy designs, for a throwback atompunk style.”

Enjoy the preview below.

Are you going to pick up HEAVY METAL MAGAZINE Vol. 2 #!?