Evil Ernie is creator Brian Pulido’s earliest success in comics. A product of the Dark Age of comics, Ernie alongside Lady Death, brings about Chaos Comics. But who is Evil Ernie? And how did Ernie succeed during the 90s while his subsequent series are so lackluster? This is the research from the gutters. 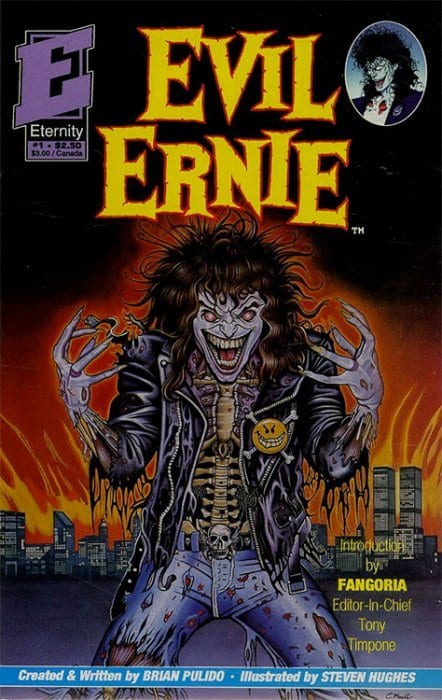 Evil Ernie begins Pulido’s career in Eternity Comics, an indie publisher best remembered for translating manga like Captain Harlock. But during the one year of publishing Pulido gets a fanbase and decides to use Ernie again in his own company. Chaos Comics republishes and continues the story of Ernest Fairchild, a telepath abused by his parents. As a child, Ernie experienced early signs of his powers. Ernie could not only hear people’s thoughts; he could manifest his own directly into other people’s heads. His parents did not take this well and abused Ernie every night.

Eventually, the Fairchilds commit Ernie to some experimental psychosis treatment. This results in Ernie making contact with Lady Death. Feeling Ernie’s need for love, she agrees to love him if he kills all of the living. Ernie accepts when he hears the neighbors’ thoughts on being unwilling to help him. With Ernie’s parents being the first victims, he slaughters 35 people before he is committed to an asylum, under the guilt-ridden Leonard Pierce, the doctor behind the initial treatment. Ernie would spend years foreseeing his future as the ghoulish Evil Ernie.

A new doctor Mary Young who grew up in the same town as Ernie, tries a seemingly improved psychosis treatment. Unfortunately, the machine mixing with Ernie’s telepathic connection to Lady Death instead explodes, killing him. Only to resurrect as Evil Ernie with the ability to control the dead.

Brian Pulido makes Evil Ernie a supernatural thriller story by instilling relatable horrors alongside the absurdity. Like Stephen King’s Carrie, we have a social outcast who can’t help being different. But their differences make them sensitive to the people around them. Teenagers have it the worst when they have bad childhoods filled with trauma. If you need a milder depiction of how childhood traumas affect people in the long run, look at Steven Universe Future. The fact Ernie needed an escape fantasy is very believable; Lady Death herself was initially just a figment of Ernie’s imagination. Such delusions often come from afflictions like schizophrenia. Even now, people have difficulties dealing with this affliction, and the wrong move can make things worse.

Such wrong moves affect Ernie in several ways. His parents are unable to deal with Ernie’s powers and the stress of their failing mill business. So they take all their frustrations out on him as a scapegoat. The initial treatments on Ernie can even be seen as analogous to lobotomization, a process where patients have been known to deteriorate with time. Such a lack of care or understanding leads an innocent boy into a life of mayhem.

What’s more interesting is how Erne’s retaliation against his parents is like a youthful rebellion. Heavy metal has often been a symbol of rebellion in teens, to the point of parents accusing it of Satanism. Given the album covers’ apocalyptic designs, it’s hard not to draw the parallel themes between the genre and Evil Ernie. Ernie’s early design even evokes heavy metal singer Blitz Ellsworth. Not to mention his debut story has the subtitle of Youth Gone Wild.

Perhaps in a meta-textual way, Ernie can even be a way of rebelling against mainstream comics. With so many people trying to make superheroes in the 90s, especially the dark and edgy kind, Evil Ernie murdering pastiches of these characters is the ultimate catharsis. Ernie also shows up these mainstream publishers by resisting events and inter-continuity by focusing on character. It’s only once the company is about to go into bankruptcy that Evil Ernie sets in motion a grand finale to Chaos Comics.

Pulido Pays The Devil’s Due

Unfortunately, by the turn of the century, Pulido all but leaves Ernie behind. With Chaos! Comics going bankrupt, all properties save for Lady Death go to Devil’s Due Entertainment. But why does Pulido leave Evil Ernie behind? At this point, the only hypothesis comes from Ernie’s nature as a character. Most of the fears surrounding Evil Ernie like teenage angst and Heavy Metal have more or less become a part of everyday life. With such tolerance, Ernie doesn’t seem all that scary.

What’s more, Ernie’s status as a force of nature only gives him two layers. He’s an abused child who lashes out at the world and desperately wants love. But strip Lady Death from him, and he’s just a bratty teenager.

Unlike Lady Death, who grows into a character of her own, Evil Ernie is rather one-note. Pulido likely ran out of ideas for Ernie and couldn’t find ways to reinvent him. So when the rights go to Devil’s Due, creators try to expand Ernie’s character. Unfortunately, this takes away aspects that make Ernie so interesting. Starting with how he kills Satanists for harming a child, this makes Ernie less… evil. Keep in mind that in his Chaos days, Ernie had no problem killing children. 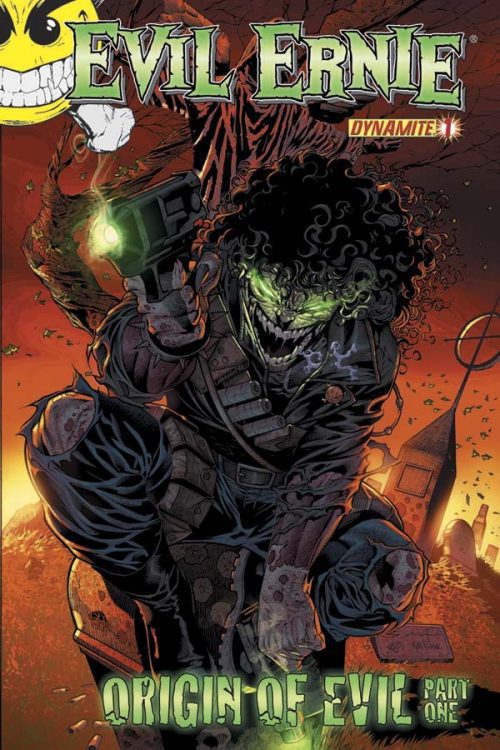 When the rights of Evil Ernie go to Dynamite Publishing, creators double down on this depiction. This character, who was once the embodiment of evil, becomes a vigilante. Now Ernie’s killing urge stems from daddy issues involving his imprisoned foster father. The fact that he kills everyone with even a hint of evil in them while working for Archdemons makes him too similar to characters like Ghost Rider. What’s more, unlike the original Ernie, who had practically no escape from evil, this Ernie had a fairer chance of a better life.

This might seem more appealing than the character whose spotlight was stolen by Lady Death. But in the end, the moral ambiguity surrounding everything makes him so sympathetic, Evil Ernie is now just a title. In the end, he’s still a bratty teenager looking for attention—all the more worse by the fact he’s driven by pettiness.

Evil Ernie will be forever remembered as the series that brings about Lady Death. But for the titular character, his time may be very well long gone. Ernie was a product of the public’s perceptions of taboo topics like puberty, mental health, heavy metal, and the 90s comic industry. Trying to adapt such a thing in modern times however proves to be difficult. With people having a greater understanding of those subjects, how can anyone tolerate such an evil character?

One idea is to explore the very idea of evil. With Halloween managing to make a comeback in theaters, it might be good for Ernie to go in a similar direction. Rather than focusing on the abuse, gore, or demonic nature, it would be good to see how the presence of such evil affects the people around Ernie. Maybe a reboot focusing on Ernie snapping for no actual reason like in We Need To Talk About Kevin would be a good angle.

What do you think should be done about Evil Ernie? Leave your thoughts in the comments.