EVENT LEVIATHAN #6 Gives Us the Best Kind of Ending, A Beginning

In Event Leviathan #6, writer Brian Michael Bendis, artist Alex Maleev, and letterer Josh Reed invert their series finale to show us something we wanted more than what we thought we wanted. It’s impossible to write about an issue like this without getting right into the spoilers, so please don’t read on if you haven’t already read the issue.

First, Bendis finally reveals to us who the mysterious Leviathan really is. It’s the kind of reveal that makes you go: “Wait… who?” A few quick visits to various Wikipedia pages, and you’ll fill in all the gaps. Leviathan is Mark Shaw, one of many to call himself Manhunter. Specifically, Mark Shaw was one of the successors of Paul Kirk’s Manhunter mantle. He worked as a government agent under Sarge Steel, he dabbled in Amanda Waller’s Suicide Squad, and he even went on a rampage killing all who had ever been called a manhunter. He never quite managed to kill Manhunter Kate Spencer, though, one of the detectives investigating the Leviathan terrorist attacks. 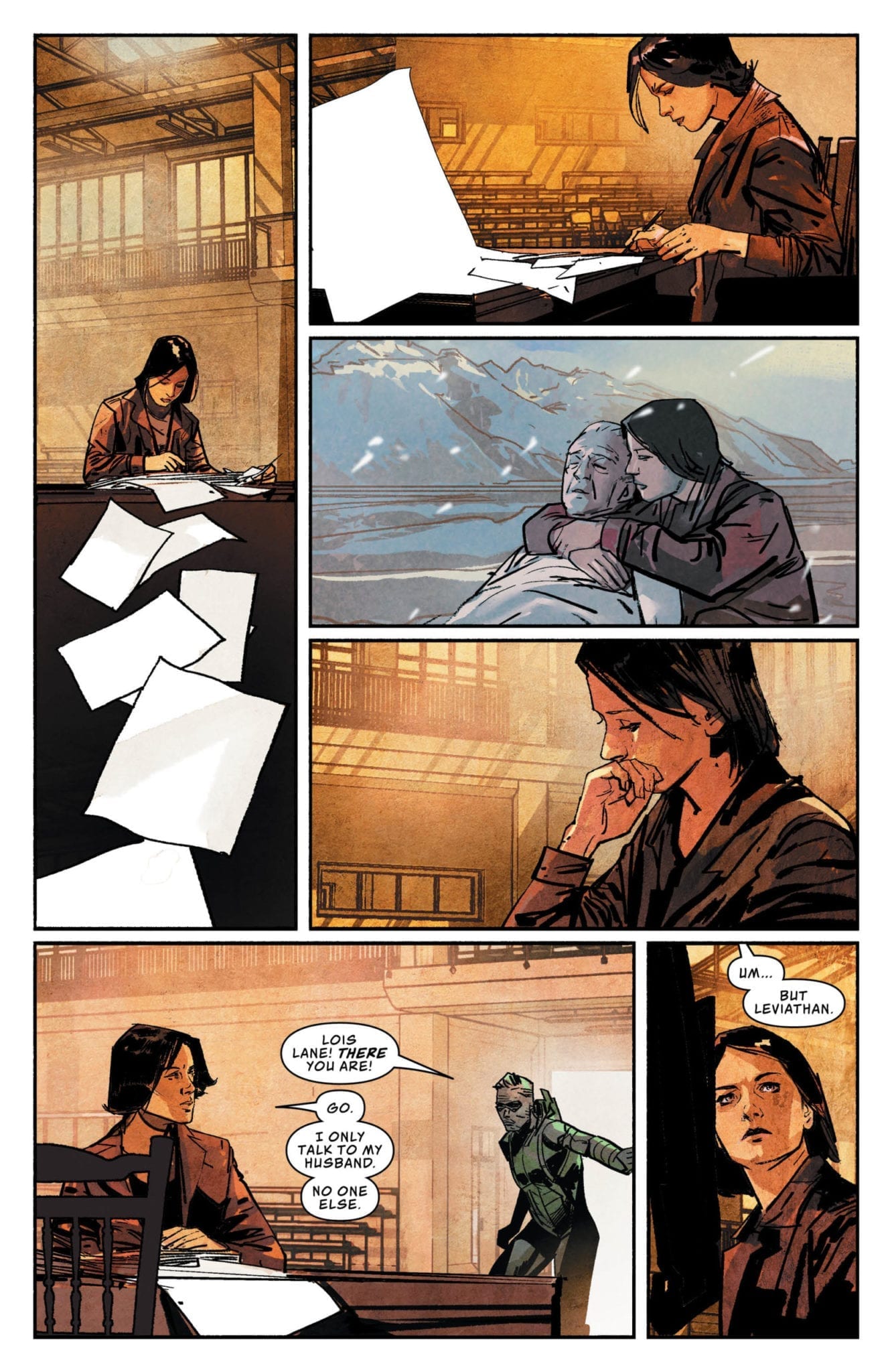 There are a few ways one can respond to this kind of development. My first response was to start thinking who I thought would have made a better Leviathan under the mask. It was the fact that I could come up with so many examples that made me pause. Maybe what Bendis, Maleev, and Reed are showing us is that Leviathan’s identity isn’t the point. It doesn’t matter who Leviathan is, because in the end, Leviathan stands for something. Leviathan poses a question. Are the heroes doing their jobs in saving the world? Could Superman, Batman, and Wonder Woman do more?

As events progress through the issue, one thing seems to be clear in Bendis’ writing: he is taking his time. We don’t get the major showdown that puts a bandaid over the damage Leviathan has caused. We don’t even really get any kind of physical confrontation at all. Instead, Superman and Leviathan talk. We are reminded why Shaw has become such an incredibly dangerous character. He has planned for every contingency, and his gospel speaks to something deep in people. Even trusted heroes like Golden Guardian have taken his side.

The summary of Leviathan’s gospel is chillingly kept until the final page. Shaw is bent over an issue of the Daily Planet that outs him to the world. His disappointment isn’t in his loss; he doesn’t seem to believe he has lost. Shaw’s frustration is that he couldn’t make someone as logical as Superman see the truth. “They would rather I burn this all to the ground than try to fix it,” he mutters. “Fine.” Bendis and Maleev truly shine here as they play against villain stereotypes. He isn’t laughing maniacally. He doesn’t even smile. He’s eerily normal. And he’s not done either.

The art of this issue is as gorgeous as all the issues before. Maleev’s use of color is almost hypnotic. There doesn’t seem to be a single solid color in the entire issue, and the blended blues and reds that act as the backdrop to each panel create a mood fit for the end of the world. Characters are drawn so beautifully as Maleev constantly brings us back to the look on their faces. Rarely do we see any character hint at a smile or frown. They all stoically press on for what they must do next, whether “evil” or “good.” 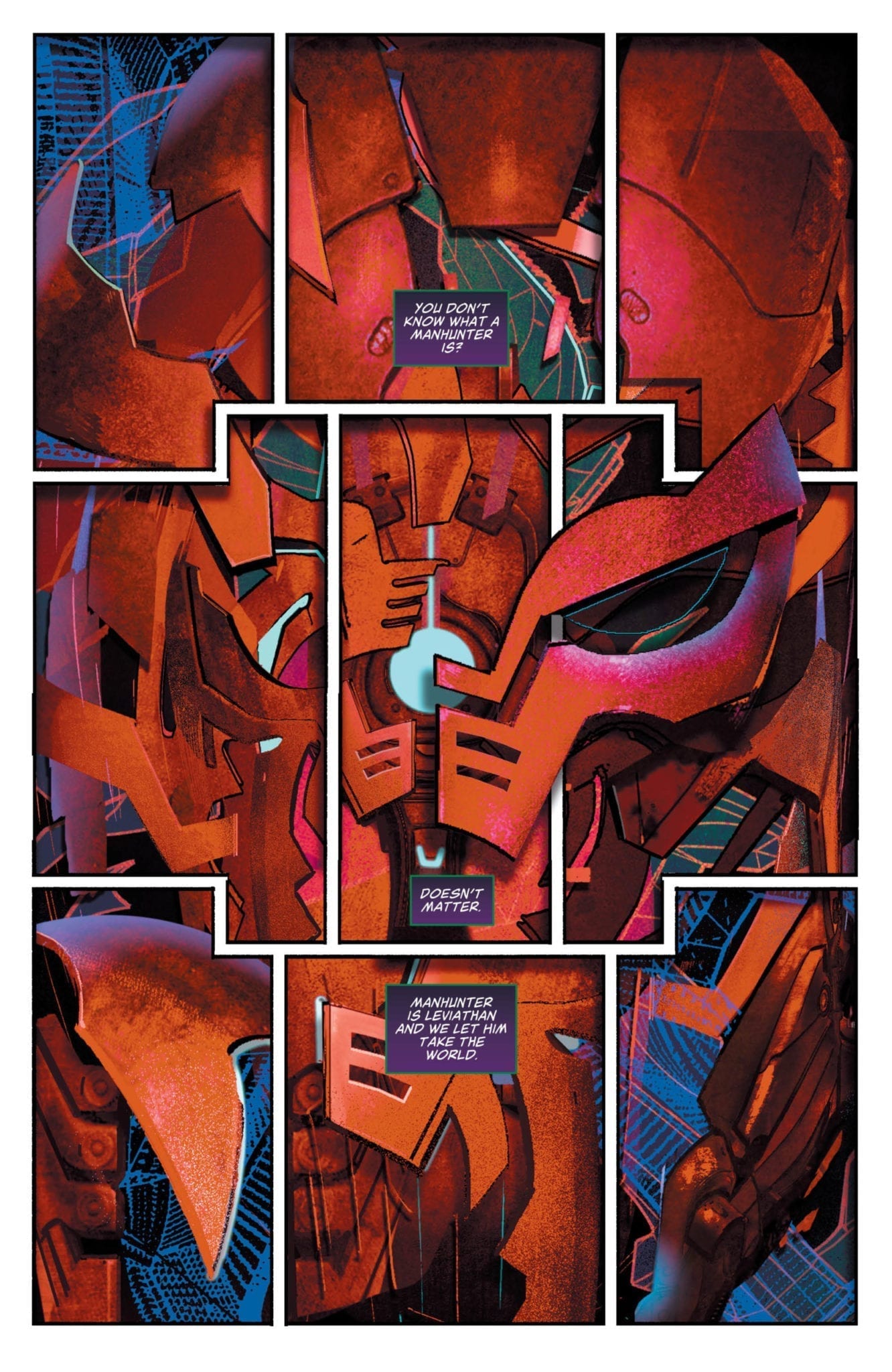 Reed’s lettering graciously steps back to allow Maleev’s art to shine. This is far from a silent comic, yet Reed’s use of space is so masterful that you seem to be able to hear the silences more than the words. That goes without saying for the sign language portion of the comic. Though not an everyday moment in comics, the “subtitles” for the sign language are placed so that the reader gives no thought to who it is that’s signing. Finally, it’s worth praising Bendis and Reed both for their reoccurring newspaper pages. Never once did they resort to button mashing to fill content, but with each issue, they gave us a fully furnished newspaper cover to help immerse us in the world.

Event Leviathan #6 was not the comic I expected it to be. This espionage thriller doesn’t end with a twist to leave everyone reeling. It only feels just to call the “villains” villains in quotation marks. The mystery and reveal are ordinary and mundane. That might be what makes it so brilliantly troubling. And the best part is it’s not over yet.

In Event Leviathan #6, writer Brian Michael Bendis, artist Alex Maleev, and letterer Josh Reed invert their series finale to show us something we wanted more than what we thought we wanted. It's impossible to write about an issue like this without getting right...EVENT LEVIATHAN #6 Gives Us the Best Kind of Ending, A Beginning