Review: DOOMSDAY CLOCK #9 Sets Up For The End

The Doomsday Clock continues to tick.

The world of Doomsday Clock exploded in more ways than one. The hero Firestorm gets pulled from the sky by civilians in Moscow during a protest. In self-defense, the nuclear hero unleashed his powers, turning the crowds into glass. He runs to Khandaq to seek sanctuary and to begin working to find a way to reverse it. Superman soon joins Firestorm and with their joint efforts find a way to reverse it. The pair head back to Moscow, but the pair are met with hostility. Superman defends Firestorm, causing the world to turn on him as they have with the other Metahumans. During the fight that breaks out, an explosion goes off, killing hundreds of civilians and knocking out Clark. What will happen with the world’s greatest hero injured and hated? 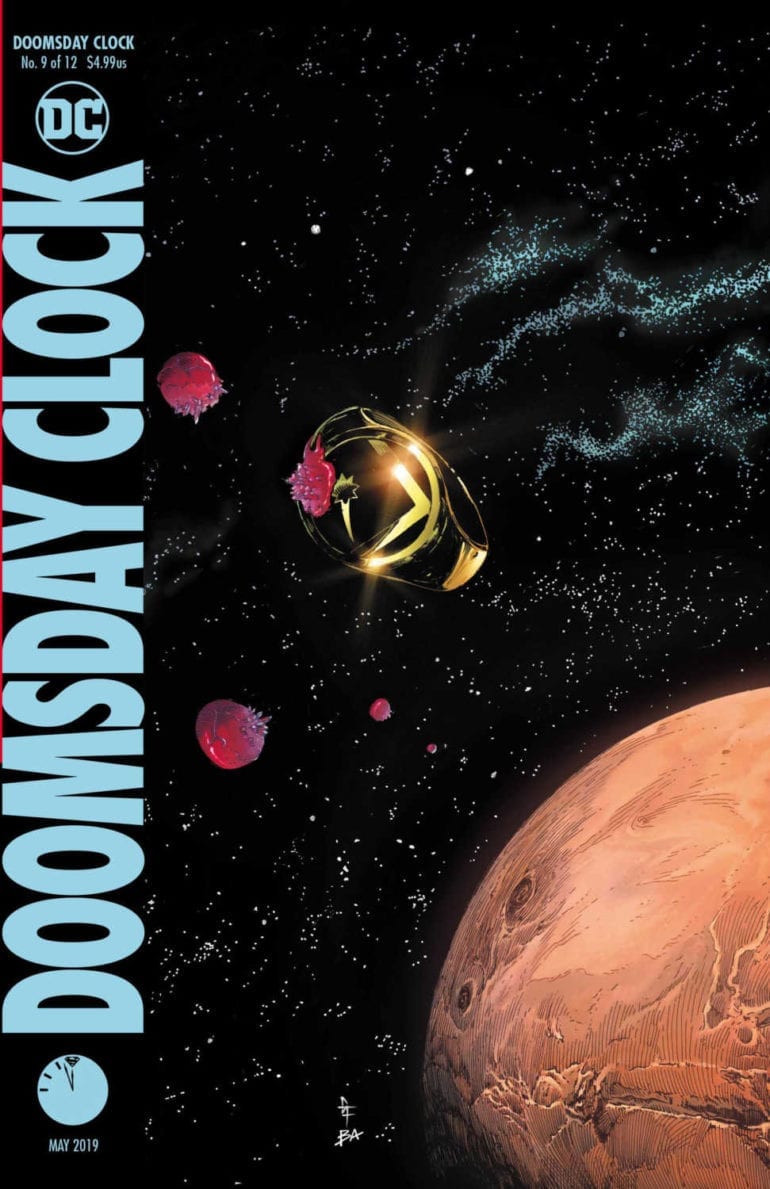 Shortly after the Moscow incident, the Justice League and other major teams leave the Earth. They do this as they have located the source of the explosion on Mars. That source is supposedly Doctor Manhattan, but Batman is skeptical. While he is recovering from the Moscow incident, he sends a message to the League, which will take around thirteen minutes.

Meanwhile, Superman has been knocked out cold by the explosion. In his comatose state, the world turns against him. People march on the Hall of Justice, the president tweets his disapproval, and Russia demands blood. The only one who gives any hope of bringing the true mastermind to justice is Lex Luthor.

When I read the opening pages, I was worried that we were going just to get fan service. Watching all our heroes get wrecked by Manhattan could have been a disservice to what made Watchmen great. However, I couldn’t help but smile watching Manhattan study each attack on him. He doesn’t even fight back. He just takes each of the powers and studies them as they come at him. It was quite entertaining.

The only negative I can think of is that Lex Luthor just comes out of nowhere. Not that his sudden appearance is unbelievable, it’s the fact we haven’t seen him since issue the fifth issue. It feels like Geoff Johns suddenly remembered that these conspiracies and master plans Ozymandias is up to is right up Lex’s alley, so he needs to be the one to reveal it. If Doomsday Clock has a more solid release schedule, I would probably be okay with it. When you have such large gaps in the story, however, it doesn’t do wonders to the flow.

Doomsday Clock continues to be the best looking book DC is putting out. The illustrations hook readers in and drag them into the world. From every battle to every expression, the level of detail is out of this world. With the story and art on the same level, it almost forgives the amount of time in between releases.

You can tell how good a comic is when the biggest complaint is the release schedule. Focusing more on action than emotion, this issue Is a thrill with every page. The art takes the story further with the masterful level of details. Doomsday Clock is setting up for a universe-shaking, and I for one can’t wait.

Review: DOOMSDAY CLOCK #9 Sets Up For The EndAs we head towards the finale, Doomsday Clock goes to more epic heights.