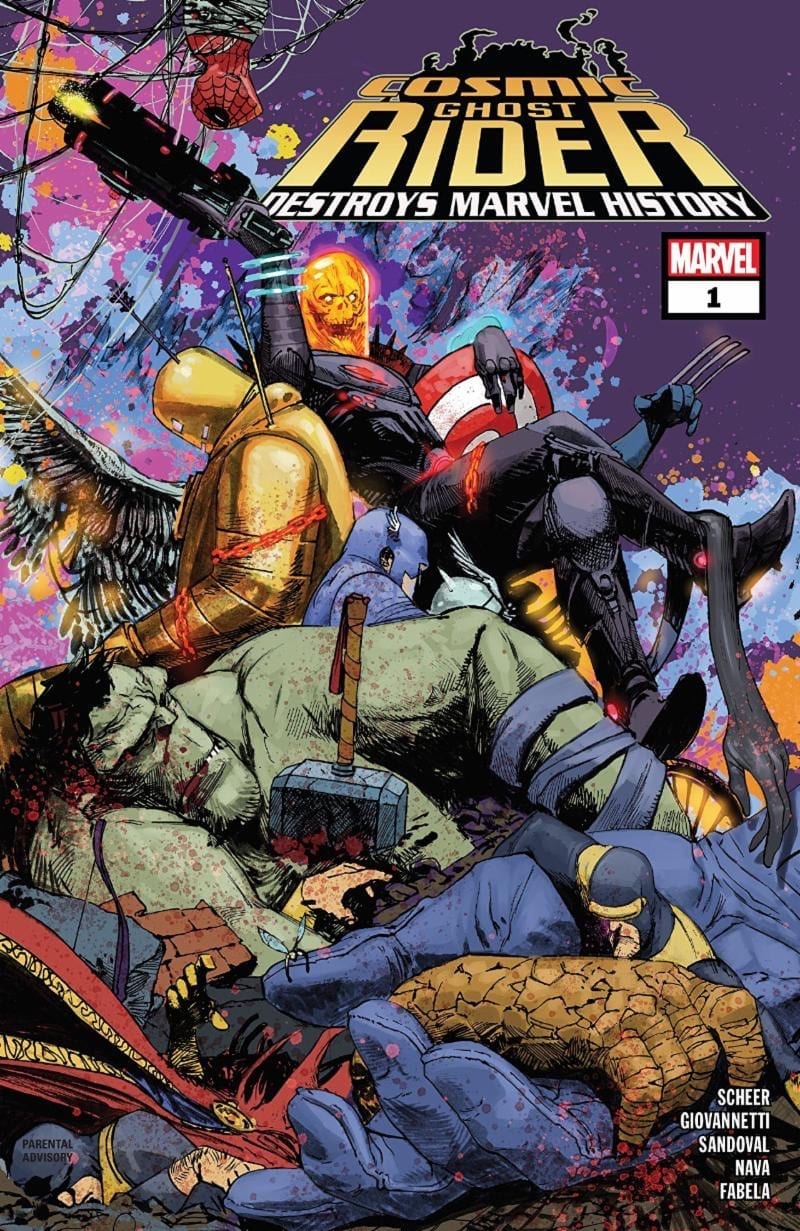 The Cosmic Spirit of Vengeance, Frank Castle, pays a visit to the past before his family is murdered. He pretends to be Frank’s Uncle Fredo and begins telling fake superhero stories to his son once Mrs. Castle anoints him as babysitter.

This is the first time we’ve had a Cosmic Ghost Rider of any sort written by anyone other than Donny Cates. Scheer and Giovannetti take the comedic route as Marvel tries to squeeze some more coin out of their hottest new character.

Cosmic Ghost Rider Destroys Marvel History #1 tries to tap into the silliness and free-wielding continuity fun that Marvel has in the past with the various “Marvel Character Destroys The Marvel Universe.” This new take on the niche is problematic right out of the gate.

This isn’t a rewriting of Marvel’s continuity with a Cosmic Ghost Riding twist, it’s Frank narrating a series of Fantastic Four stories with himself inserted to tell really poor jokes. The narration of the entire issue is written as if the reader is an eight year old boy–it wears out its welcome very quickly. 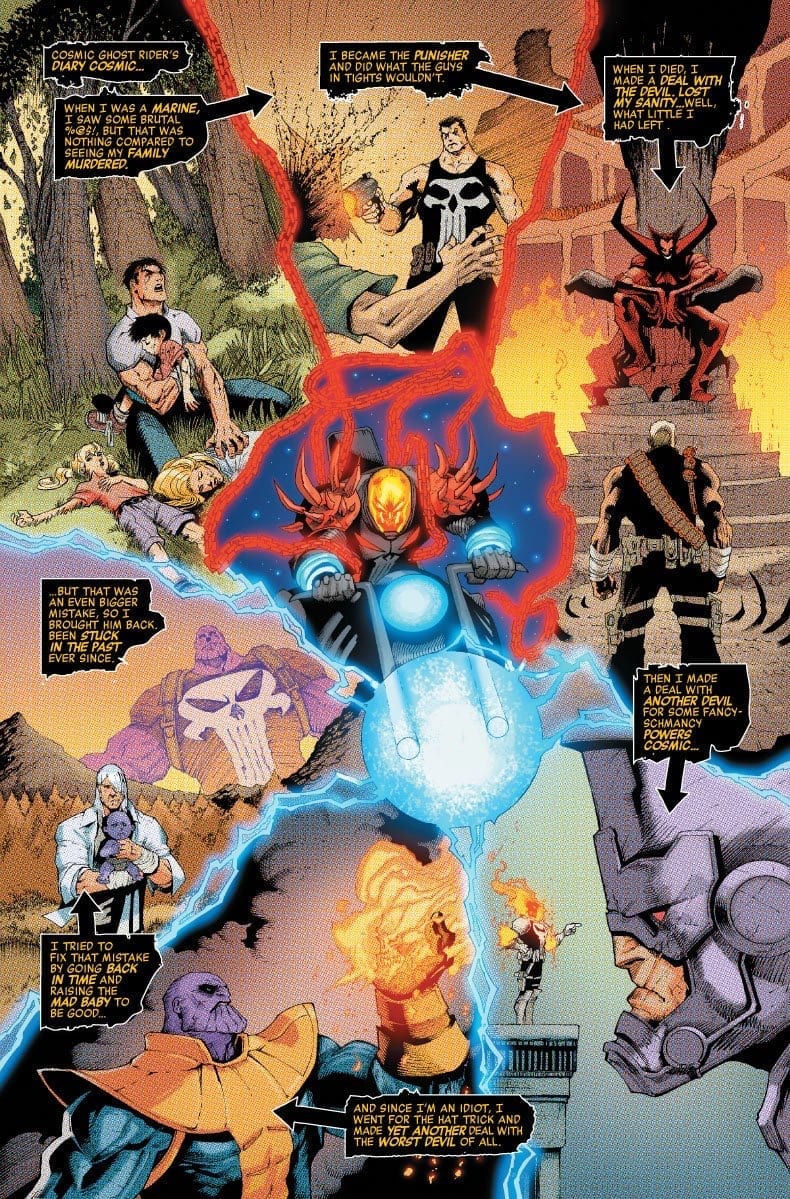 Enlisting comedians to write comic book stories has worked wonders in the past. Almost every time Scott Aukerman’s name is attached to a comic, it’s worth a read. The same cannot be said about this issue filled with cheap punchlines and a flimsy premise.

Scheer and Giovannetti don’t fit this character as well as their previous work on Deadpool. There’s nothing gained from inserting Frank into these historical FF moments. Each tale is crafted to hold our hand and walk us into an eye-roll inducing joke, one after another.

Cosmic Ghost Rider Destroys Marvel History is such an unfunny chore that by the time they attempt to explore Frank’s emotional state during this painful charade, it feels pointless to even acknowledge. A single panel of Frank shedding a tear as his son gets him another beer is the best they could do to make this anything more than an unfunny joke book?

The premise of the book says that Frank is rewriting Marvel history, but what we get in this issue is Frank simply bullsh*tting his son with tall tales. This makes the finale, with Uatu showing up, all the more puzzling and uninspired. 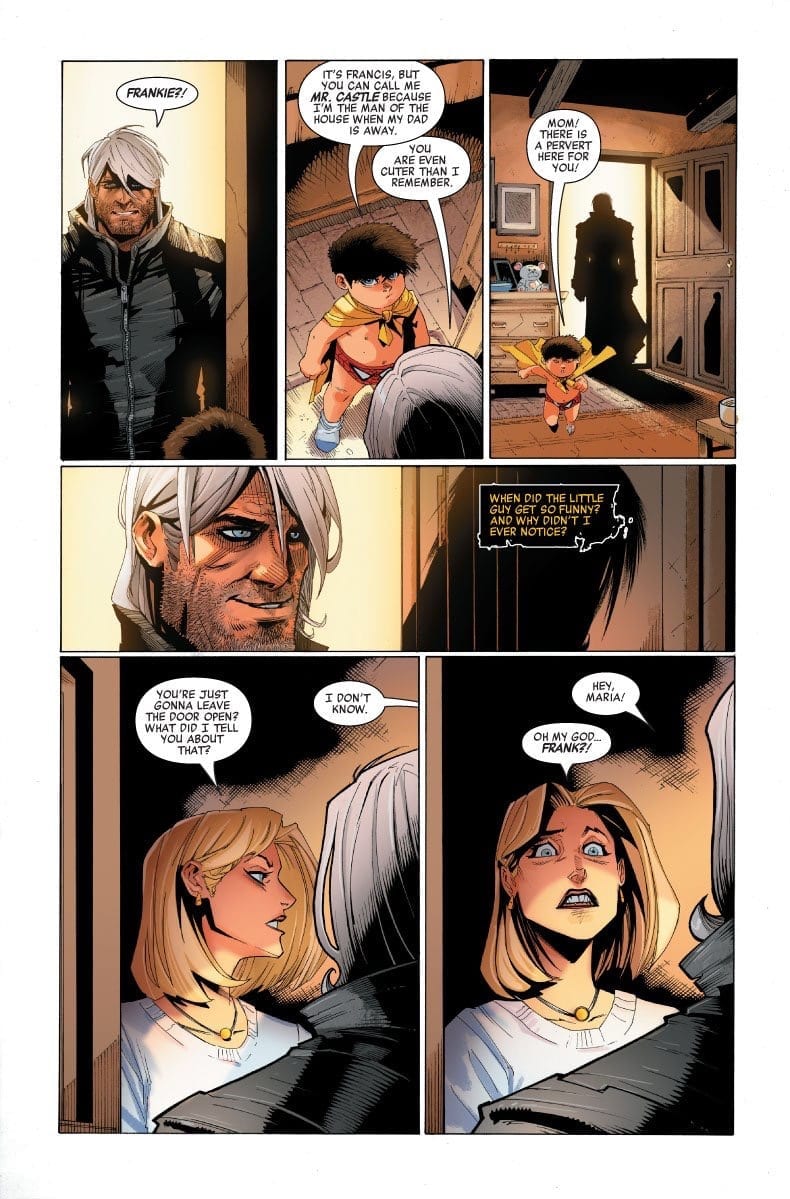 The only element of this issue that could possibly entertain you is the artwork. Penciler Gerardo Sandoval, inker Victor Nava and colorist Antonio Fabela do their best to liven up this uninspired cash grab. Sandoval does a fine job revisiting some of the more memorable scenes in Fantastic Four history. Cosmic Ghost Rider is such a great design that it’s near impossible to make him unappealing (despite the story really trying to make you hate him).

There’s an appealing 90’s tinge to the Ghost Rider action, particularly his transformations. This style lends a hand to our main character but has the reverse effect on his son who is the focal point of the issue’s weakest visual moments.

If you’re a fan of Donny Cates’ Frank Castle stories you would do well to stay away from this one. It provides nothing for fans of Marvel history, Cosmic Ghost Rider, or comedy. Cosmic Ghost Rider Destroys Marvel History #1 is unfortunately a major dud.

Cates designed a very specific and sarcastic tone for this character, which leaves room for plenty of humor. The problem is that this creative team completely misread that tone and wrote a watered down version of their previous Deadpool work with some history thrown in. 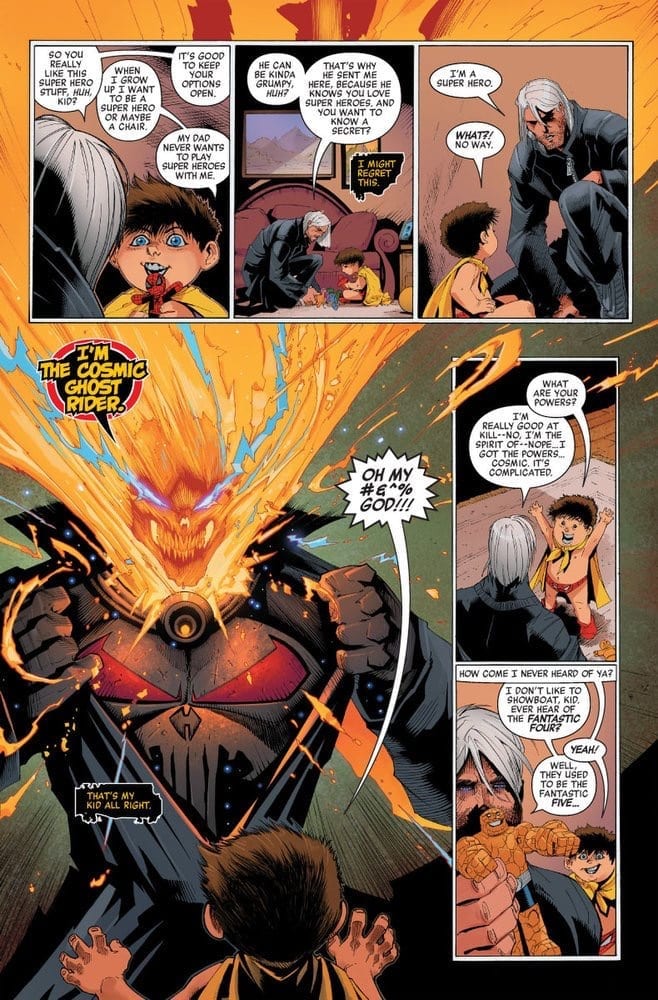