COMICS ON KICKSTARTER is a new series we are starting at Monkeys Fighting Robots highlighting comic book Kickstarter campaigns. According to Kickstarter, $15.3 million was pledged to successfully funded comic book projects in 2018, up 27% from 2017. If you are working on a comic book related Kickstarter campaign, send us your information at info@monkeysfightingrobots.com.

What the heck is THE BABOON?! 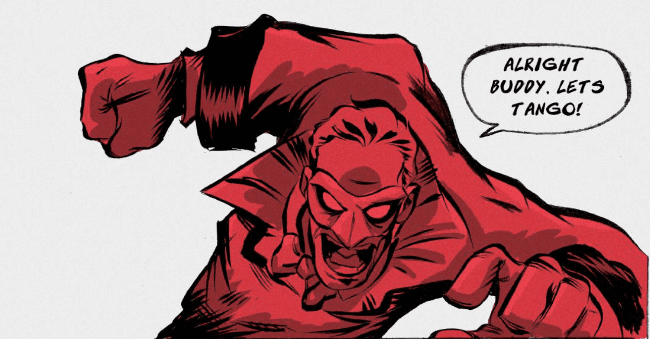 Jaime Jones’ The Baboon is a modern version of Hanna-Barbera adventure cartoons mixed with Jones’ art style (the love child of Todd McFarlane and Will Eisner).

According to Jones, The Baboon is his love letter to the pulp stories of the 40s and 50s. The tone is light, fast, and fun. This is his first Kickstarter campaign and Jones is going for quality with a 60-page hardcover. It took Jones a little over a year to complete the book as he is the writer, artist, inker, colorist, letterer, and designer. You will recognize Jones’ work from the back-up story in Violent Love, “A Constant Distraction” from Image Comics.

Watch the Kickstarter video for THE BABOON:

One of the things that potential backers look for on Kickstarter is a completed project, and Jones has stated The Baboon is complete. The funds collected will be purely for printing and shipping the book to backers. Click on the widget below for more information and to grab yourself a copy.

About the project:
To the world at large, The Baboon is a nothing more than a government myth. A figure of the shadows taking down evils wherever they lurk. To his crew -three of the greatest heroes of their time- he is a man of daring and compassion, who will stop at nothing to defend the world from the greatest evils known to man. But, to his adopted nephew, Jamie, Barton Marlow – The Baboon- is the coolest guy in the whole world. And now in his new life of adventure, Jamie wrestles with being the regular kid he once was and living up to his uncle’s expectations. A man whose fantastic exploits are unequaled for narrow escapes, fantastic adventures, and endless thrills.

The Mustelid Menace: While in search of the Jackal formula – a super soldier serum that could change the dynamic of the entire world – the Baboon is captured by the nefarious Professor Weezal. His only hope of escape is with the help of his amazing crew. But, things are strange on Mount Mustelid and the Jackal formula may be in full effect. Time is of the essence as the Baboon battles his way through armed men and hulking, carnivorous monsters. Let’s just hope they never have to go back.

What do you think? Is this the type of comic book project you want to see more of? Comment below with your thoughts.