CEREBUS THE AARDVARK: The Narrative Reflection of Dave Sim

Cerebus The Aardvark is a series with as divisive a reputation as its creator. Depending on the source, the series is one of the greatest comics of all time with how experimental it is; or it’s the series that ruins the lives of its characters and creators. But this article isn’t about Dave Sim’s fall by Author Tract, where writers imbue characters with their world views. It’s about how the series reflects parts of Sim’s life.

Cerebus began as a parody of Barbarian comics like Conan and Red Sonja. Like most parodies, it makes fun of the unusual tropes surrounding the setting. Skeletal warriors to an entire issue in dedication to the Aardvark peeing. Sim and his partner at the time Deni do whatever necessary for publishing. But they decide to self-publish out of necessity. Unfortunately, things don’t get any easier, and Sim hospitalizes himself after using LSD to get him to work better. It’s at this point both Sim and the series change attitudes.

Psychedelics have a reputation for improving or damaging people’s thinking processes. Writers like Alan Moore and Terence McKenna are known users of these mind-altering drugs. But for Sim, it’s difficult to see if this was good or bad. His recovery has him change Cerebus into an overall narrative. To Sim’s credit, this was years before Watchmen, which has a similar goal. But it’s also a time when Sim’s does whatever he can to get his name out. 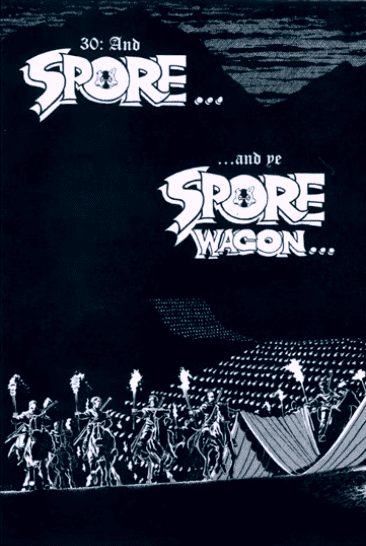 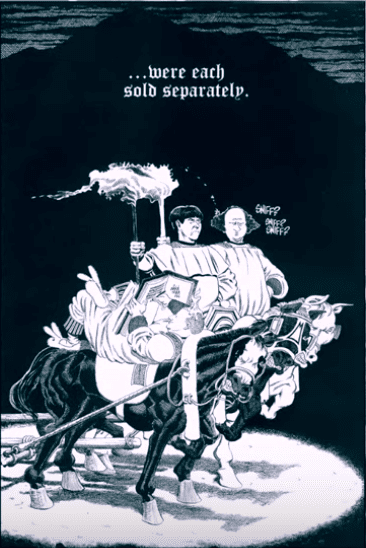 Most of these attempts come from Roach, a mentally ill man who forms dissociative identities based on popular superheroes. The Wolverine parody, in particular, was supposedly a means of advertisement. This also includes a crossover with Spawn that will never be reprinted due to Sim and Todd McFarlane clashing over copyright. Something that Sim previously criticized by helping create the Creator’s Bill of Rights. However, with how Sim uses the imagery of Spawn through an army of pastiches while presenting them as merchandise, it’s difficult to determine the difference between parody and mockery.

Cerebus, in particular, is essentially Sim’s avatar, sharing a drive for success by any means. The Aardvark is a smart aleck who just wants money, power, and to drink all day. Seemingly in reaction to Sim’s need for success, Cerebus enters the storyline “High Society.” In that story, Cerebus with some help, secures some high political positions, including Prime Minister. Sim, at this time, gets his footing both in art and business with his then-wife Deni Loubert.

But while High Society and “Church & State” present some very high rises both in and out of the story, they also reflect the challenges Sim goes through. One of the reasons Aardvark-Vanaheim is so successful is because of the earliest trade paperbacks. These “phone books” were distributed directly through mail order, cutting out the publishing middlemen to make more money. This upset comic distributors, not unlike how Cerebus starts an unpopular war for his own benefit that ends in his exile. But both Sim and Cerebus are popular enough for others to follow their examples. Comic companies open the market for trades with distributors, creator-owned material becomes a practice, and Cerebus becomes a Pope.

Being on top of the world can get to people’s heads, Cerebus and Sim are no exceptions. When it comes to important women in their lives, they have a tendency to drive them away. Cerebus gets married three times but mistreats his first two wives with his influence as Pope. Sim divorced Loubert and drove some of his female staff away for going against former friends like Jeff Smith. It certainly doesn’t help that Sim has an anti-feminist mindset he instills into the series.

It might be because Sim set his goals too high; 300 issues is a lot, unlike the initial 156. Most of the third act composes of essays about his various opinions instead of comics. But the YouTube channel “Comic Tropes” hypothesize that this is from the initial LSD. Cerebus’ “ascension” certainly seems to imply that. Many who take psychedelics believe they enter a higher consciousness, even if most cases only report synesthesia. Yet during the Aardvark’s second ascension, he actually speaks with Sim where his creator talks him down. If Cerebus truly is Sim’s mouthpiece, does that mean that Sim is talking down to himself or scapegoating his creation for his own flaws?

The Highs and Lows of Cerebus

Nobody can ever really know what goes through the fundamentally flawed minds of others; just interpret it. Cerebus is a testament to how comic creators take chances both in artwork and business. Sim’s artwork evolves throughout a nearly 30-year run gaining more details and surrealism. It’s also a story of success against the odds of self-publishing. So much that creator-owned companies like TKO Studios use more refined methods of Sim’s marketing. However, it is difficult to separate the good from the bad when the source triggers ugly parts of people’s psyches.

But even then, Sim’s downward spiral isn’t anything new in comics. The above Alan Moore after Watchmen has a reputation for his very confusing rants about mainstream comics. His creator-owned comics like Promethea and Cinema Purgatorio are practically rants against what he hates. Even now, there are several creatives who are very difficult to tolerate because they rant about their beliefs so much. The vast majority of them are on the ComicsGate campaign.

What do you all think? Is Cerebus a complete reflection of Dave Sim as he dives into an abyss? Or is there more to it? Leave your thoughts in the comments.