BOOM! Studios announced a new graphic novel on Wednesday, Over The Garden Wall: The Benevolent Sisters of Charity, hitting stores in Spring of 2020. The book is written by Sam Johns and illustrated by Jim Campbell.

Over the Garden Wall is the Emmy Award-winning animated television miniseries created by Patrick McHale for Cartoon Network. The show follows two half-brothers as they journey through the strange and haunting Unknown, with Beatrice, a talking bird, as their companion as they search for a way home. The show is based on McHale’s animated short film Tome of the Unknown, which was produced as part of Cartoon Network Studios’ shorts development program. Over the Garden Wall was broadcast throughout the week of November 3, 2014 to November 7, 2014.

About THE BENEVOLENT SISTERS OF CHARITY:

It’s another day in the Unknown but Wirt isn’t feeling too well so when they come across a stately building run by the Benevolent Sisters of Charity who take care of all sick souls, he jumps at the chance to be pampered by the doting nurses. When the nurses frown on animals entering the facility, Wirt abandons Beatrice and Greg’s frog to the elements, then drags Greg with him into the open arms of the Benevolent Sisters. Those arms wrap a bit tight, though, and even when he’s feeling better, the Sisters don’t seem to want him to leave. And where did Greg go? 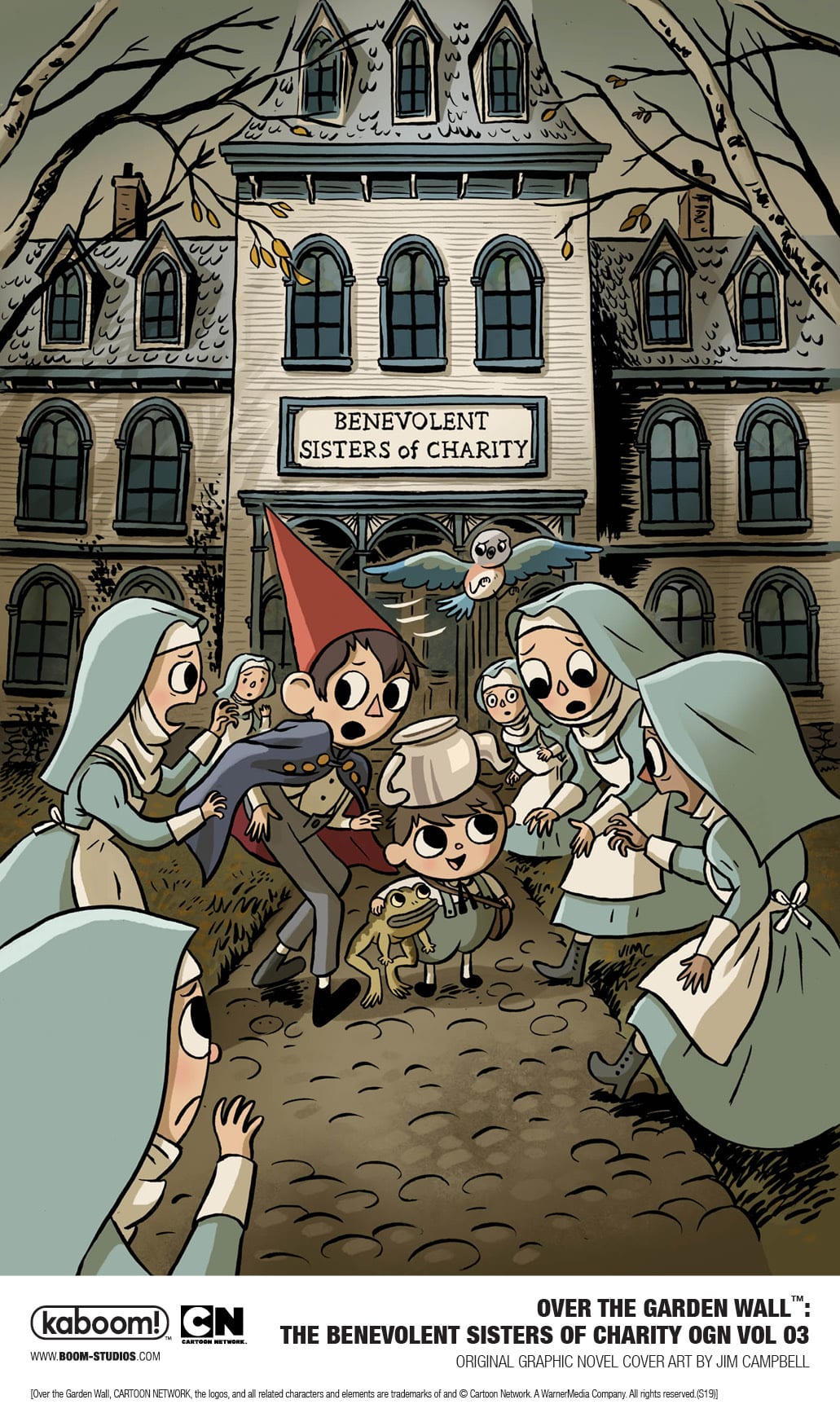 “As usual, Wirt just wants some assurance that everything will be okay but The Unknown is mysterious and never exactly what it seems, so trusting the wrong people in the forest can end badly for all involved.” said Matthew Levine, Editor, BOOM! Studios. “Sam and Jim guide our young adventurers through this particular health scare with plenty of twists and surprises along the way for fans of Over the Garden Wall.”

The TV show won the 2015 Emmy Award for Outstanding Animated Program; you can currently stream the entire miniseries on Hulu with a subscription.

Comic books based on Over the Garden Wall have been in production since 2014, starting with a one-shot adaptation of the show and spinning out into various miniseries and graphic novels. The comics have varied from telling stories set in between episodes of the show, to stories that served as both sequels and prequels to the show.

About the creative team:

Sam Johns is a writer living in Brooklyn, NY. They graduated from Savannah College of Art and Design in 2012 and have been making comics ever since. When they’re not telling their own stories, they love to read horror novels aloud to their dog Khaleesi. 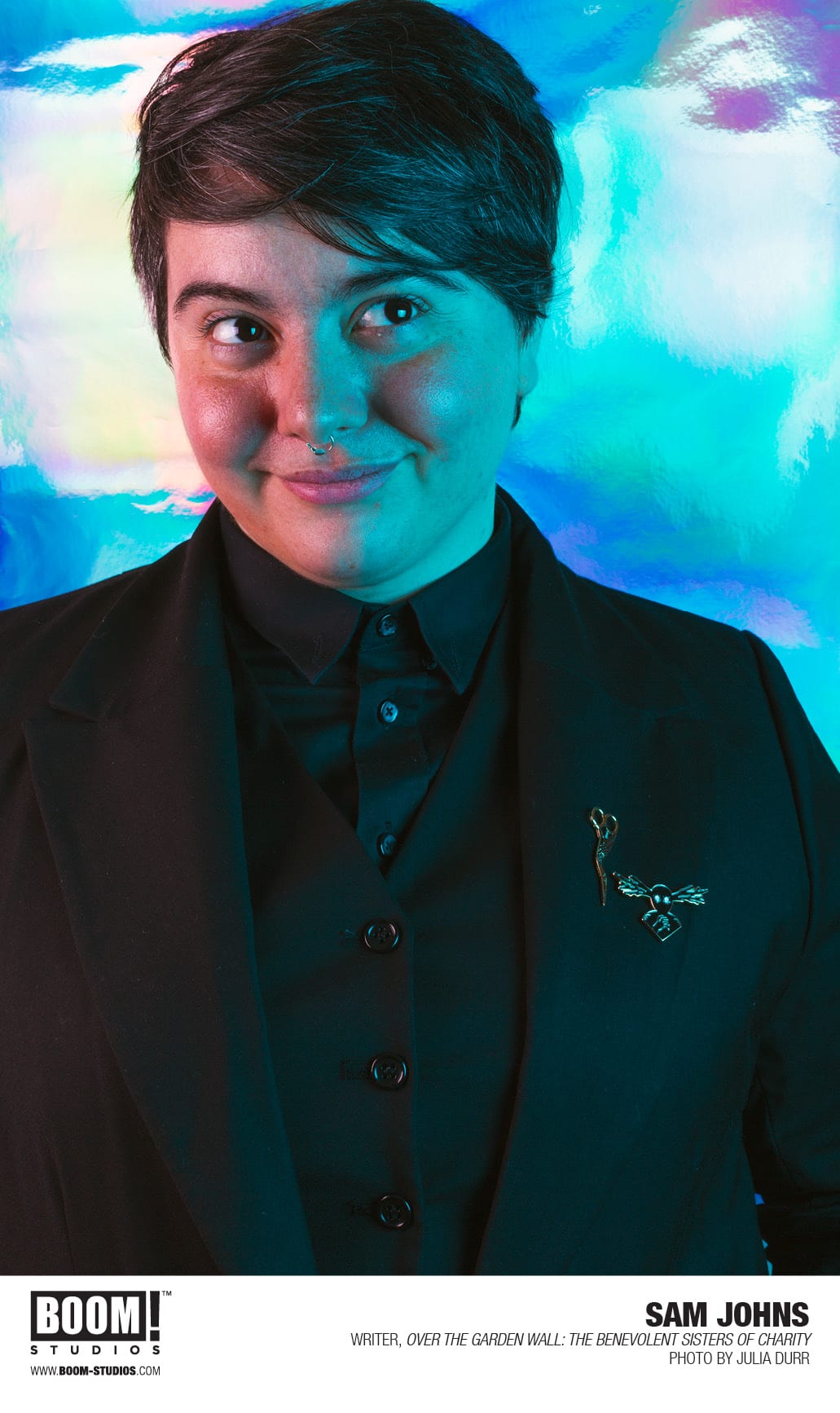 “The first time I saw Over the Garden Wall, I accidentally binged it in a single day. Since then I’ve watched it in one sitting many times… but, you know, intentionally. I’m the oldest of six siblings, so it was an absolute joy to write about the incredible bond between brothers, and the sometimes incredible fights that come with that closeness.” said Johns. “I was even able to insert some of my Mom into the story! She’s a nurse! But, like, a much better at her job, less scary nurse. I also think growing up in Pennsylvania gave me an edge. The forests there are just like the Edelwoods, and I took a lot of inspiration from hiking there with my friends!”

Jim Campbell is a cartoonist, illustrator, comic book colorist, and animator who served as a storyboard artist for Patrick McHale’s Over the Garden Wall miniseries for Cartoon Network in 2014. He has illustrated various Over the Garden Wall comic books as well as an original graphic novel Over the Garden Wall: Distillatoria for BOOM! Studios. Campbell has been drawing comics off and on since teaming up with the Meathaüs collective in 2001. He has been a color artist for Dark Horse, Marvel, Spongebob Comics, Mad Magazine, and Tony Millionaire. In his spare time, he plays in the Brooklyn band Paper Fleet. 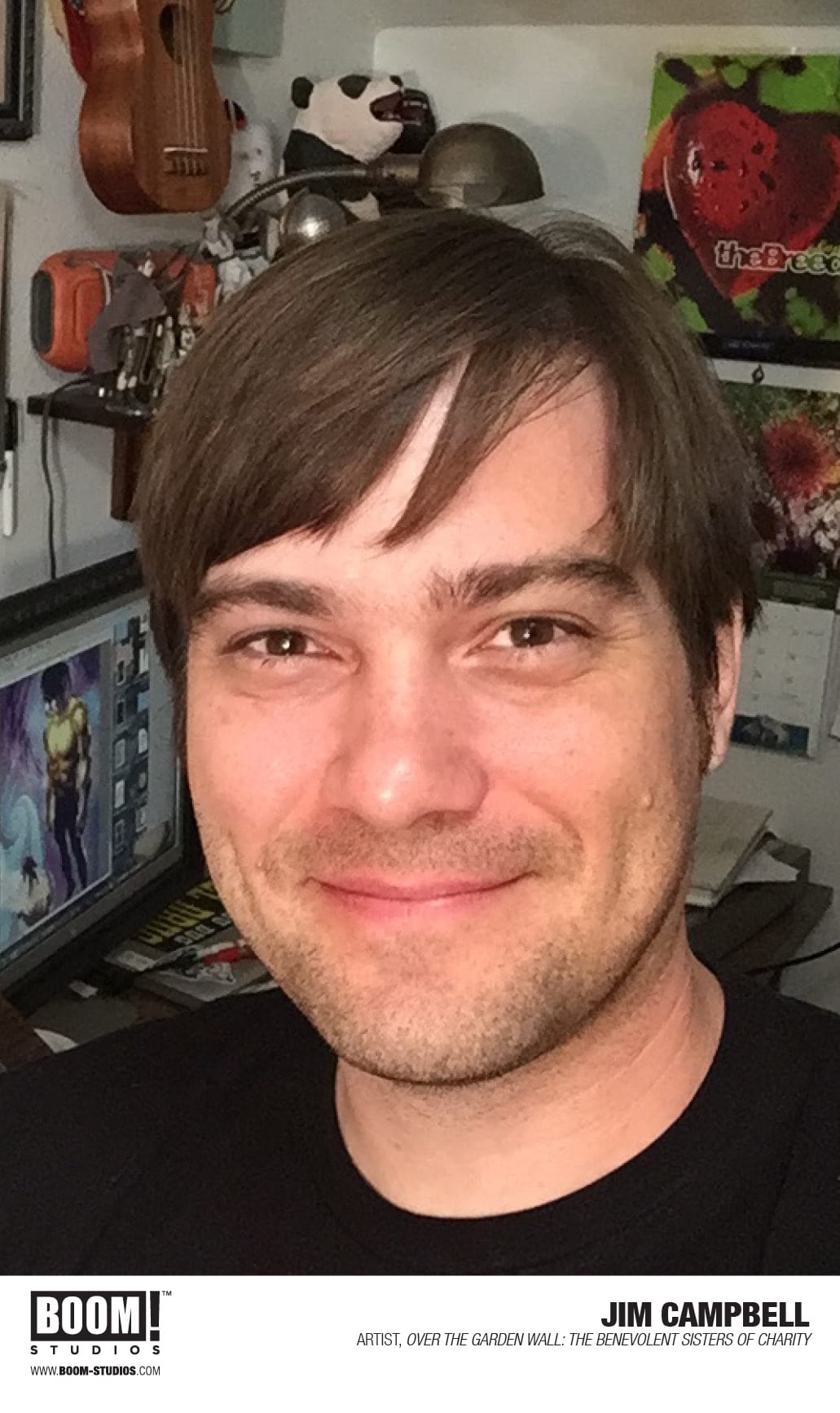 “It’s exciting to step into the world of Over the Garden Wall with the talented Sam Johns. I’m thrilled to show fans of the show exactly what Greg, Wirt, and Beatrice are up to now as they run into yet another group of mysterious folks in the depths of the woods and try their best to survive the experience.” said Campbell.

OVER THE GARDEN WALL: THE BENEVOLENT SISTERS OF CHARITY is the latest release from BOOM! Studios’ award-winning KaBOOM! imprint, home to comics for middle grade and younger readers including licensed series such as Adventure Time, Steven Universe, Regular Show, Ben 10, and Over The Garden Wall, along with original series like Just Beyond: The Scare School by R.L. Stine and Kelly & Nichole Matthews, Hex Vet by Sam Davies, RuinWorld by Derek Laufman, Hotel Dare by Terry Blas and Claudia Aguirre, and Pandora’s Legacy by Kara Leopard, Kelly & Nichole Matthews.

For more on OVER THE GARDEN WALL: THE BENEVOLENT SISTERS OF CHARITY and more from KaBOOM!, please visit www.boom-studios.com and follow @boomstudios on Twitter.

Review: Slowing Down in FLAVOR GIRLS #2

Review: A Multifaceted Battle in the Works in ONCE & FUTURE #24