Review: BATMAN #91 Sets Up Phase 2 of the Designer’s Plan

Batman faces off against Deathstroke!

Batman faces an assault on all fronts. The Designer has given Gotham’s greatest criminals the ultimate plans for control near the start of the Dark Knight’s career. While Penguin, Riddler, and Catwoman take them, Joker begins a fight with the master criminal. While it appears the battle ended in his death, the Designer appears many years later, initiating the plans. Starting with bringing the deadliest assassins into the city, Batman takes each one down, with only Deathstroke getting away. Catwoman soon stops Bruce to explain while Harley Quinn chases down Deathstroke with drones. Batman then realizes that the Designer and his cohorts are targetting both him and his alter ego, Bruce Wayne. How will he overcome this threat? 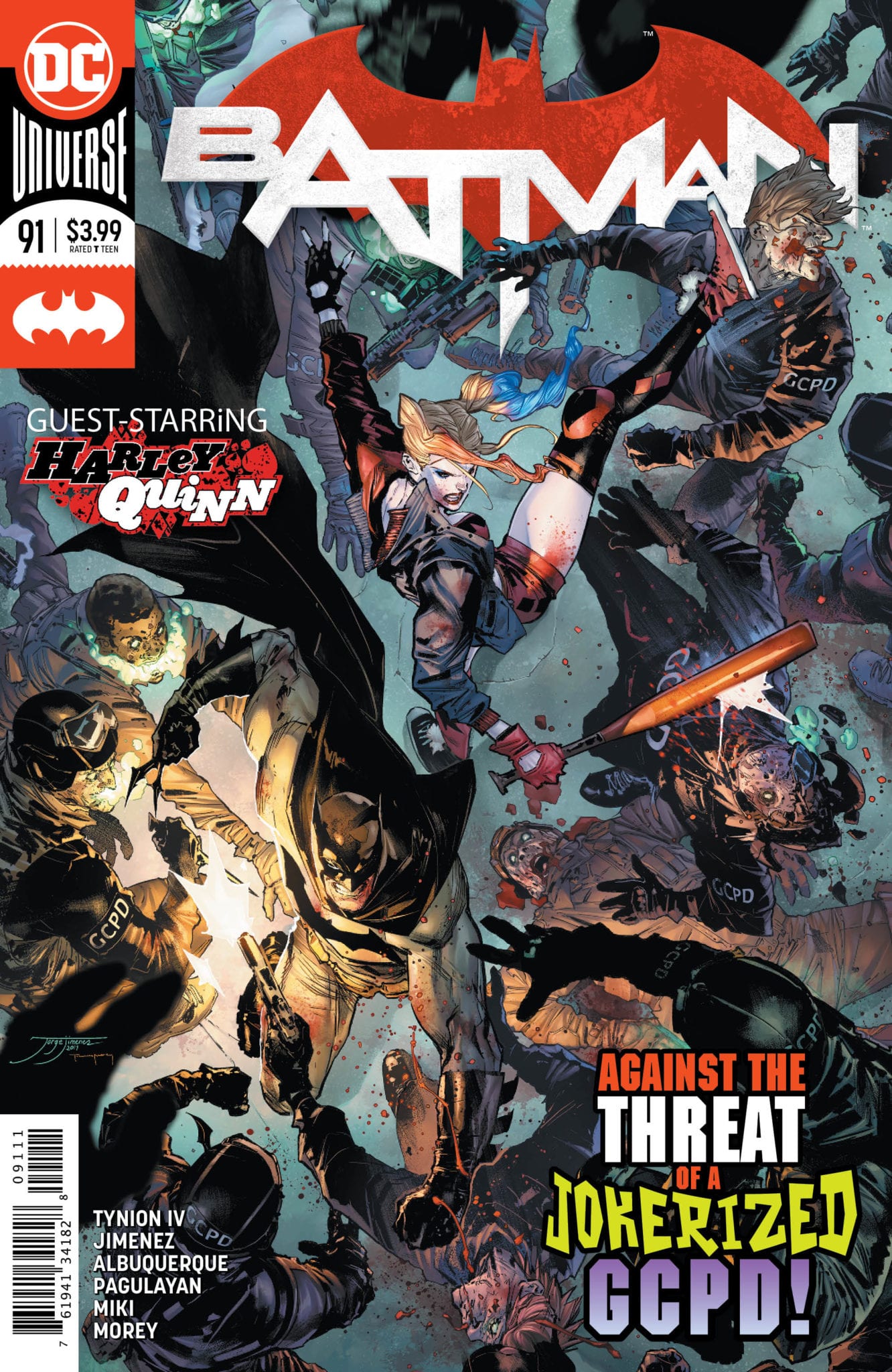 After it becomes clear that Harley is doing more bad than good, Batman steps back in to stop Deathstroke. He flies in on the Bat and takes him high above Gotham. When Deathstroke prepares to fight, Batman reveals his thoughts on everything. He understands that his fight against the super criminals isn’t working anymore and wants to try something else to help Gotham. When Deathstroke doesn’t care, the pair continue the fight.

Meanwhile, Joker reveals why he didn’t join the Designer to a captive bartender. While they were all good plans, it would have given Gotham over to the Designer. Instead, he has his own plan to unleash. 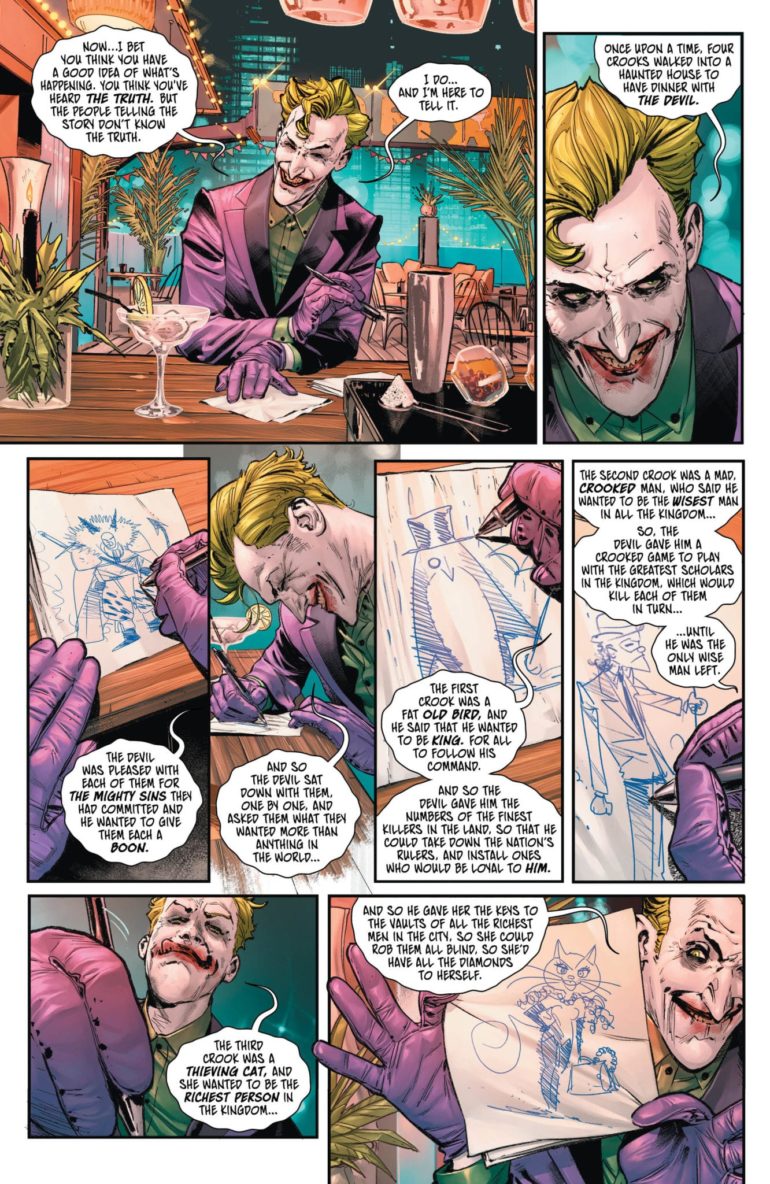 As we conclude this first arc, we finally get that progression I’ve been begging for! We see Batman reveal his intentions for trying to change the city, and honestly, it makes sense. After King’s run, Bruce would probably try and find a new way to help Gotham, as his usual methods have just left the door open for a return of villains. We also learn why Joker stood apart from the Designer and hints to an even more dangerous plan. It’s moments like these that make me realize we are moving forward. Tynion could have passed off all of King’s work and wiped the slate clean for himself. Instead, he is building upon the Gotham and Batman we’ve read for over 90 issues.

The only real problem this issue has is Batman expositing his troubles to Deathstroke. Why would Bruce Wayne ever vent his frustrations to a mercenary of all people? If it were one of his usual costumed foes or a member of the family, it would make sense. Like if he were talking about this grand plan to Selina or Mr. Freeze, it would make sense. When it’s a character like Deathstroke, whose prime motivation is money, it’s pointless. This is definitely a nitpick, but it stayed with me after closing the issue. 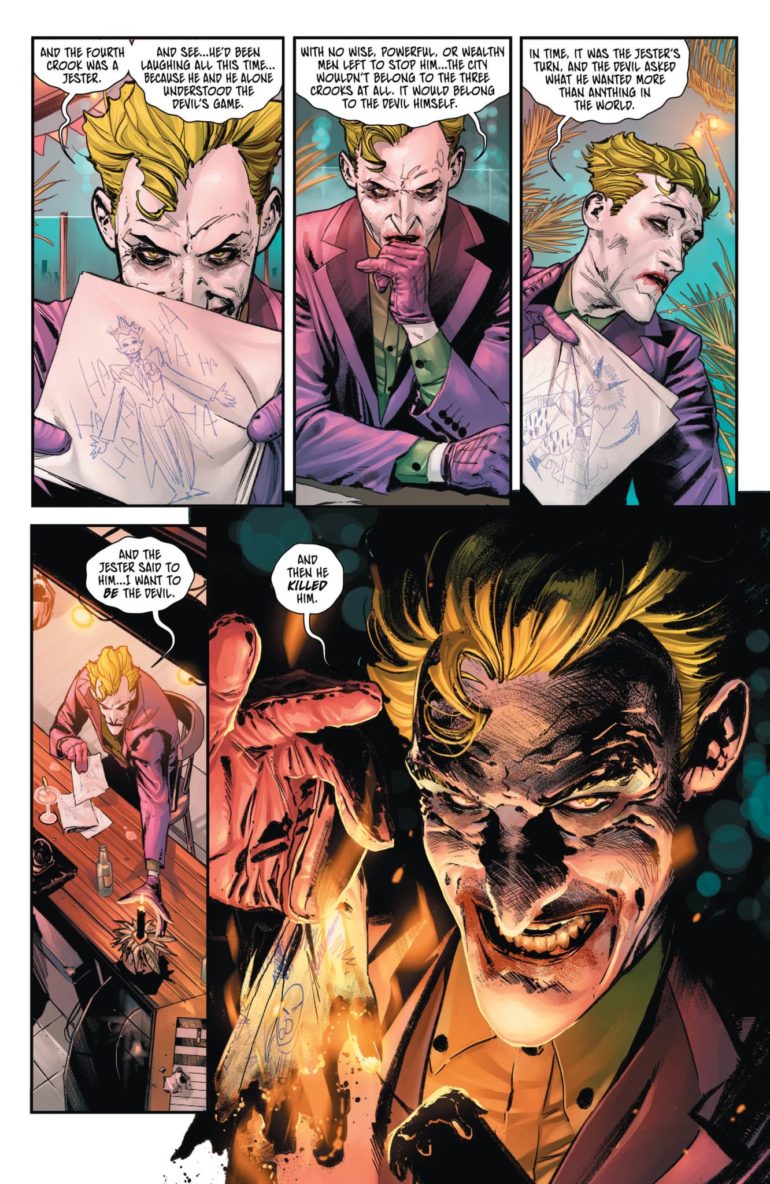 We have a large group for the art team this time around, and it’s a bit overwhelming. We jump to each story, constantly changing styles with each set of characters. The best look would have to be the Catwoman and Harley style, with their linework being smooth and overall pretty to look at. The colorwork of Tomeu Morey helps all the art styles, but it would have been a bit better if we just stuck to one style instead. 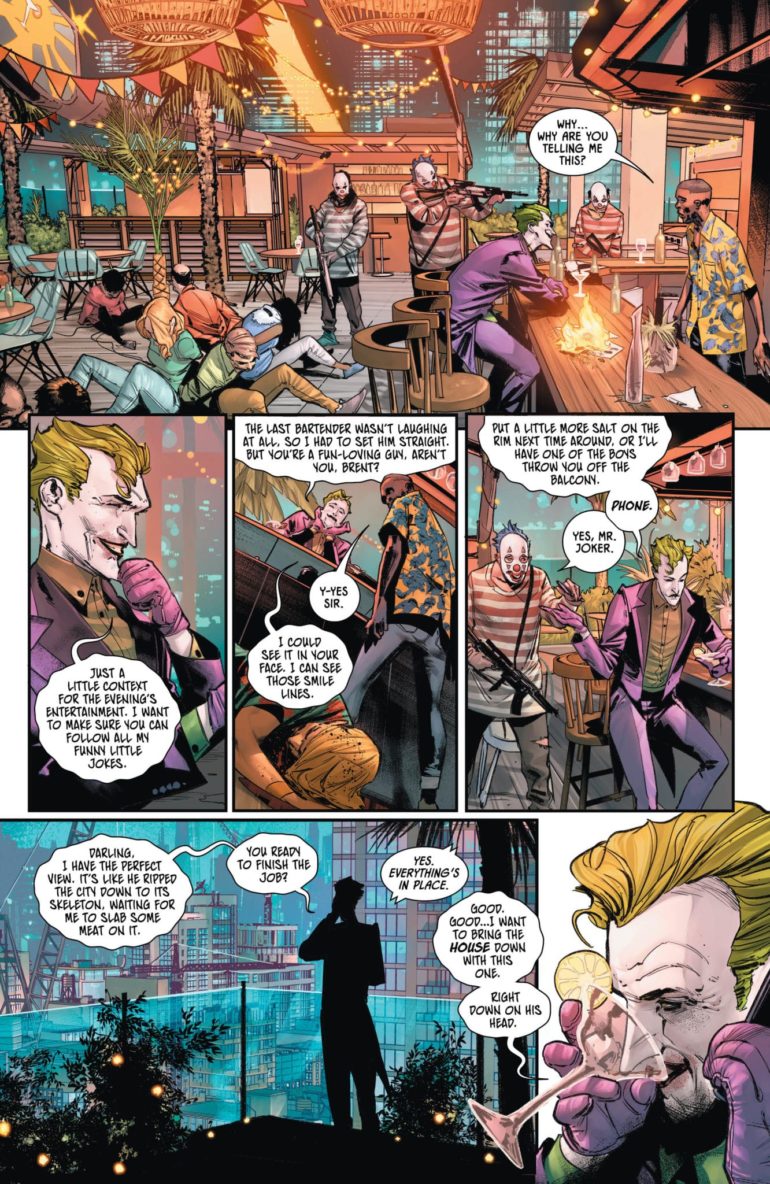 Overall, the end of this opening arc is an overall great issue. We get story progression that gets me excited and continues to show the threat of the Designer. Even though Batman’s rant to Deathstroke seems off, what he does say shows how this character has been growing since the start of Rebirth. The art suffered this time around due to the number of people chipping in to help. So far, we’ve had a wide variety of artists coming in and out to contribute to the comic, and honestly, it’s time to settle on a team. Despite that drawback, I really enjoyed this issue and am excited to see what comes next.

Review: BATMAN #91 Sets Up Phase 2 of the Designer's PlanThe story finally moves forward, but buckles under the weight of its multiple artists.