AMAZING SPIDER-MAN: GOING BIG #1 – Welcome Back To The 90s

This week Marvel throws you into a web-filled time machine back to the 90s for a handful of Spidey stories. AMAZING SPIDER-MAN: GOING BIG #1 is a serving of the Good, the Bad, and the Ugly of 90s Spider-Man comics. 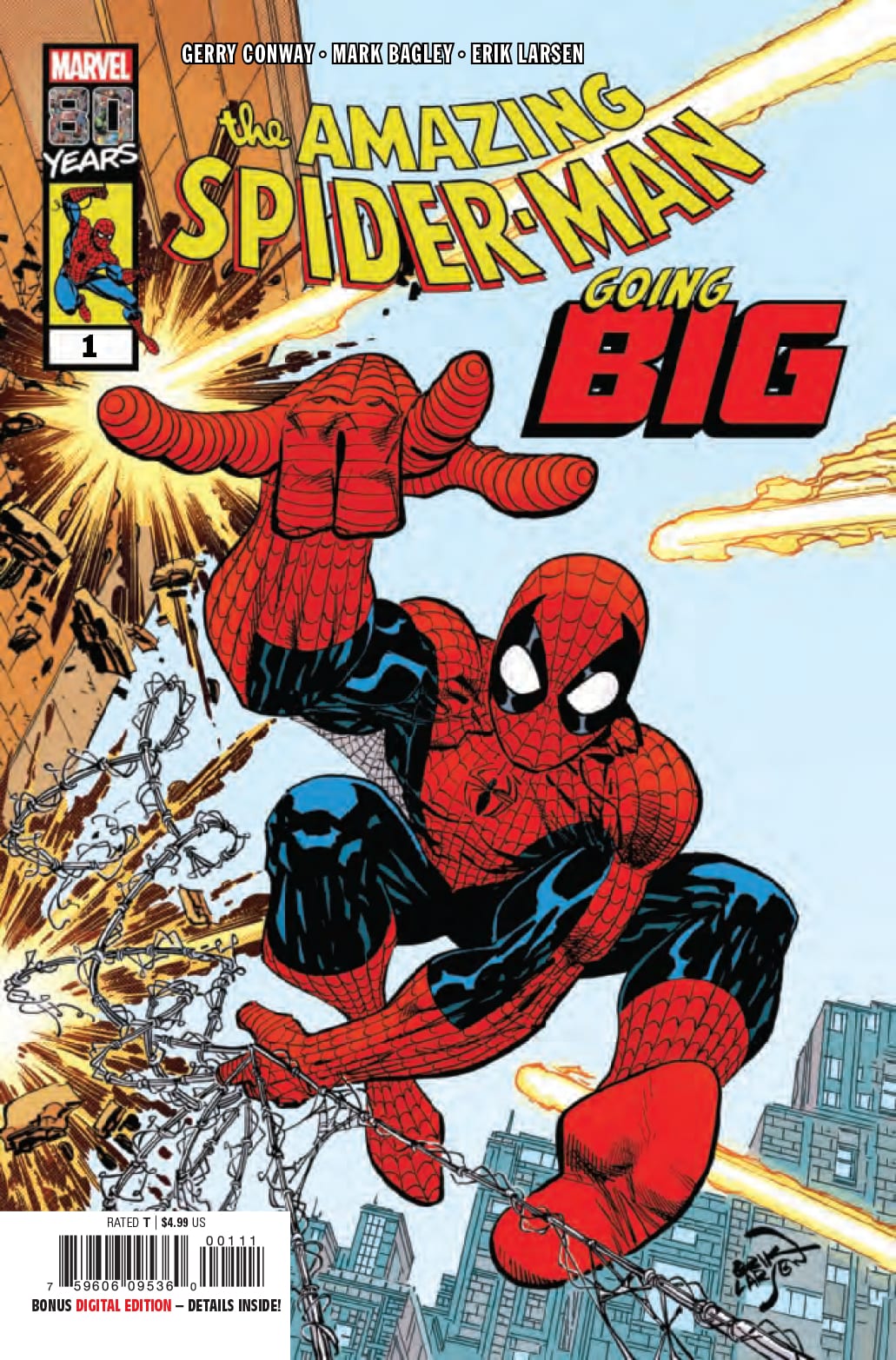 If you’re a longtime Spider-Man reader, you may recognize the creative forces being sold to you with this special issue. If not, this should be a fun exercise in what your favorite web-slinger was like during the 90s.

First up we have veterans Gerry Conway and Mark Bagley on their very first collaboration. Both have many years with the character separately, it’s kind of crazy that this is the first time they’ve worked together.

“Field Of Fire” is by far the best story of the bunch in both plot and art. We’ve been seeing a lot of Mark Bagley’s Spider-Man work lately (Spider-Man: Life Story, Venom) and he’s still got it. This is probably some of his best work on a web-head book out of the past few years.

There’s a fluidity to the layouts that serves the story well and delivers us a Spider-Man that we’re all familiar with. Conway’s script is great, taking full advantage of the shorter format telling a self-contained story to completion. The “mystery” of who the sniper is could be solved by a coma patient in the first bit of dialogue–but it doesn’t make it any less fun.

Our second story is an ultra-short tale written by Ralph Macchio and Todd Nauck on art. Poor Ralph Macchio and his comic book writing aspirations, he’s been given a few short story opportunities for Marvel recently and none of them have struck a chord at all.

“Life Lessons” is a forgettable and boring three-page story that we’ve all read a thousand times before. Macchio seems to do fine as an editor, but his writing credits are lackluster at best. Maybe he doesn’t have anything to say with these characters or maybe he’s not given enough rope. Either way, this is the weakest of the bunch for AMAZING SPIDER-MAN: GOING BIG #1.

The third and final story is the big draw, longtime Spidey creator Erik Larsen returns to tell a quick story about Spider-Man and Nightshade (long forgotten Spidey villain)–also a bit with Pete and MJ’s attempt to see a movie.

Larsen’s art hasn’t changed much, Laura Martin’s coloring gives it a bit of new life. Mostly, this another forgettable exercise in nostalgia. It’s quite jarring sometimes when a book striving to look like the 90s is telling a modern day story. This would be a great example of that.

Spidey looks just like he did all those years ago, but Nightshade and her werewolf cronies look awful. Larsen’s Spider-Man dialogue attempts to immediately tap into the attitude of way back when but it doesn’t translate well. Rather than be our lovable cornball attempting humor at the worst possible time, Peter comes off as an annoying Deadpool-ripoff.

AMAZING SPIDER-MAN: GOING BIG #1 isn’t all bad, but it definitely goes downhill drastically after the first story by Conway and Bagley. This is a one-shot issue that leaves you with nothing in the end unless the only Spider-Man you’ve ever cared for was the 90s.

Especially considering this is a $4.99 book, you’re better off avoiding this one.

It's like 90s Spider-Man but without the fun.AMAZING SPIDER-MAN: GOING BIG #1 - Welcome Back To The 90s