Alex Ross is arguably one of the most influential artists in comics. After going through some of his best page work in regards to superheroes, they show why capes and cowls are still around, even despite some somewhat prophetic stories under Ross’s brush, like authoritative abuse and a pandemic.

Superheroes are a fascination to behold as they come out in reaction to significant world events, even if they sometimes fall out of people’s favor. At the same time, people will want their favorite heroes back after they and current generations iron out flawed ideas. Otherwise, their visage and symbols can be usurped by powerful and influential people who twist them beyond recognition. Even then, superheroes will still have struggles for their nature as a reactionary force that doesn’t solve problems. But that isn’t necessarily a bad thing; it’s the struggle to find or represent hope that Ross and friends believe are the core of superheroes. Some spoilers ahead if you haven’t read the books below.

The Marvels of Superheroes 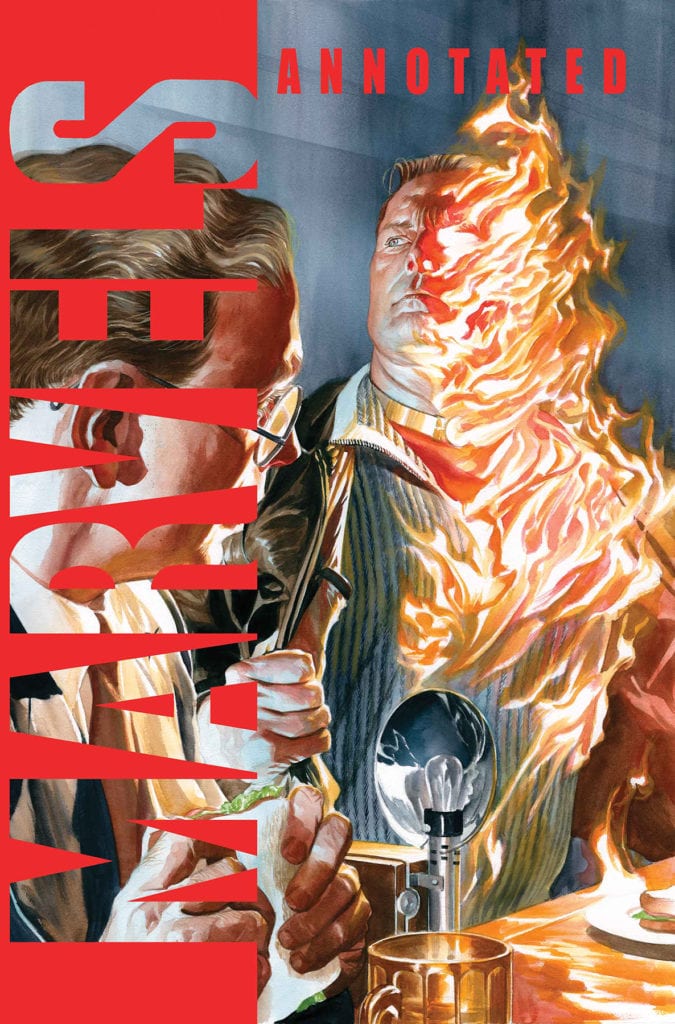 Beginning in Marvels, Ross along with writer Kurt Busiek displays how superheroes look to an onlooker. Since around World War II, superheroes capture the imagination of people. They can be as horrific as the original Human Torch and Namor and can help during times of conflict. Even after WWII, the times these larger-than-life figures appear are in reaction to events like the Civil Rights Movement. The emergence of these figures can even inspire empathy to help out others, no matter how different. The point-of-view character Phil Sheldon for example, was anti-mutant until the appearance of the X-Men has him question his view. But even people who follow these characters throughout their lifetimes can outgrow them. After witnessing the death of Gwen Stacy, Phil becomes fed up with them. Yet he doesn’t outright hate them; in fact, he encourages people to observe from a safe distance. 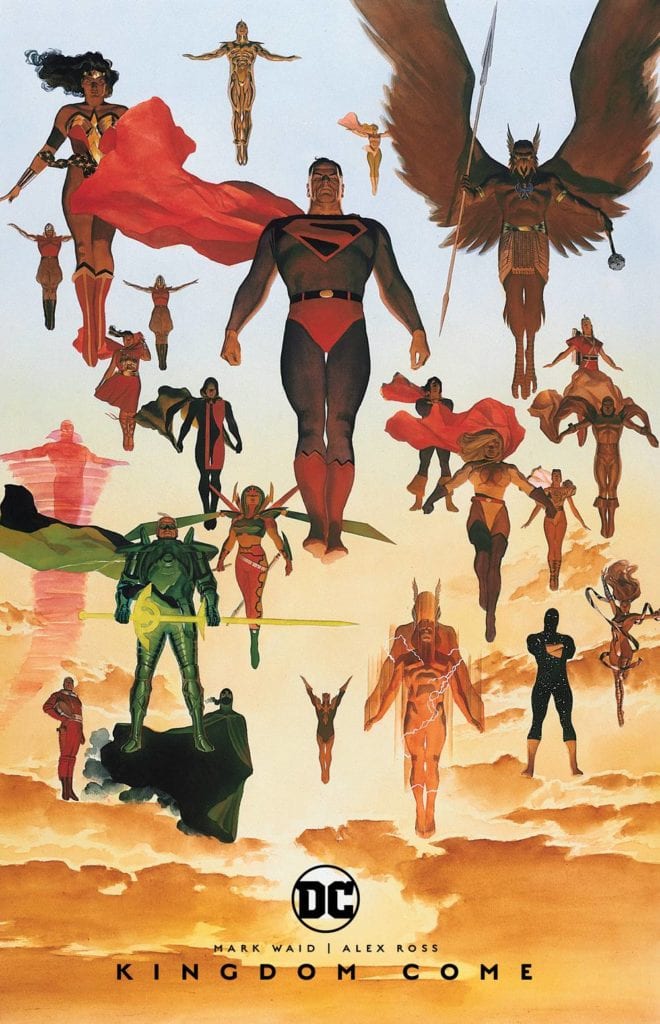 Now think of the above scenario where Phil gives up on superheroes after Gwen Stacy’s death even further. In a manner more similar to acts of police brutality, the heroes of the loud and obnoxious 90s go too far. Their actions lead to a nuclear disaster that destroys Kansas. Kingdom Come is where the superheroes of old return to confront these newer heroes. Superhero fandoms between generations will always compare how comics used to be to how they currently are.

Before the nuclear situation, criminals like the Joker practically get away with murder until he was finally killed by the 90s anti-hero poster boy Magog. Ultimately both sides are flawed, and the heroes that remain refuse to see them until they’re shaken out of their delusions. Ross believes the stories of old and new have universal value; they need better communication like how Mark Waid presents it. Otherwise, new generations will see their flaws without acknowledging their own.

Sometimes those flaws manifest in the most unlikely places. In Earth X, the son of a superhero gains telepathy so great it overwhelms everyone around him. His father, the unknown Marvel character Comet Man, not being around, however, causes him to fall in with the wrong crowd. One that adopts the Punisher logo for Benny, now this Neo-Nazi cult’s Red Skull. This isn’t the only time, Franklin Richards had long become the new Galactus after upsetting a universal balance. Identities, ideologies, and a need to fill a void are at the heart of superhero stories. Whether it’s the battle for representation or how people view the world, superheroes are potent symbols that can shape the world.

What Superheroes Mean To Alex Ross 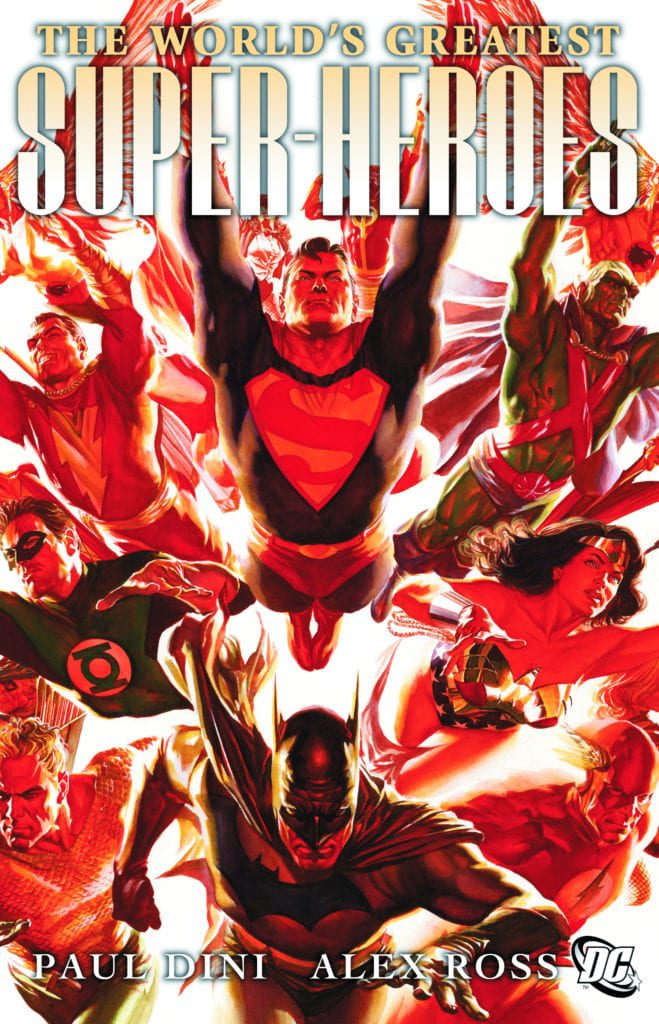 In Ross and Paul Dini’s The World’s Greatest Super-Heroes Anthology, the reader sees what the Justice League means to the world. Superman is a symbol of humanity’s potential for peace as much as Batman and Wonder Woman is for justice and truth. Unfortunately, even symbols that gather together for humanity’s benefit struggle. During a pandemic in the Liberty and Justice saga, the Justice League is pushed to their limits in trying to contain the chaos. But things become so desperate that the league has to shut down trade in some areas. A good portion of the public turns against the league for stripping their liberties and believing that the league is the cause of the plague. Yet despite these dire situations, times of crisis are exactly when heroes are necessary. Having a hero like Superman around certainly puts the suicidal people in this story at ease.

Can Superheroes Really Make A Difference? 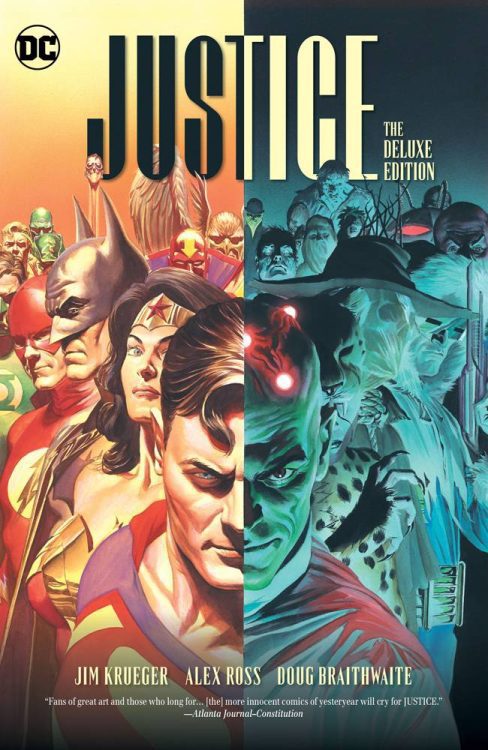 Despite this comfort, there are times when superheroes feel more like distractions than solutions to crises. Justice features the league going against the Legion of Doom after some visions of a crisis the league can’t stop. This brings up the issue of how real tragic events can’t be stopped even with the presence of superheroes. Yet superheroes are never meant to prevent or be solutions to problems. By nature, they are a reaction to events. Like when the Golden Age Superman comes about in response to street injustice in the 1930s. Superheroes might have great power, but their great responsibility comes from inspiring those around them to do better. 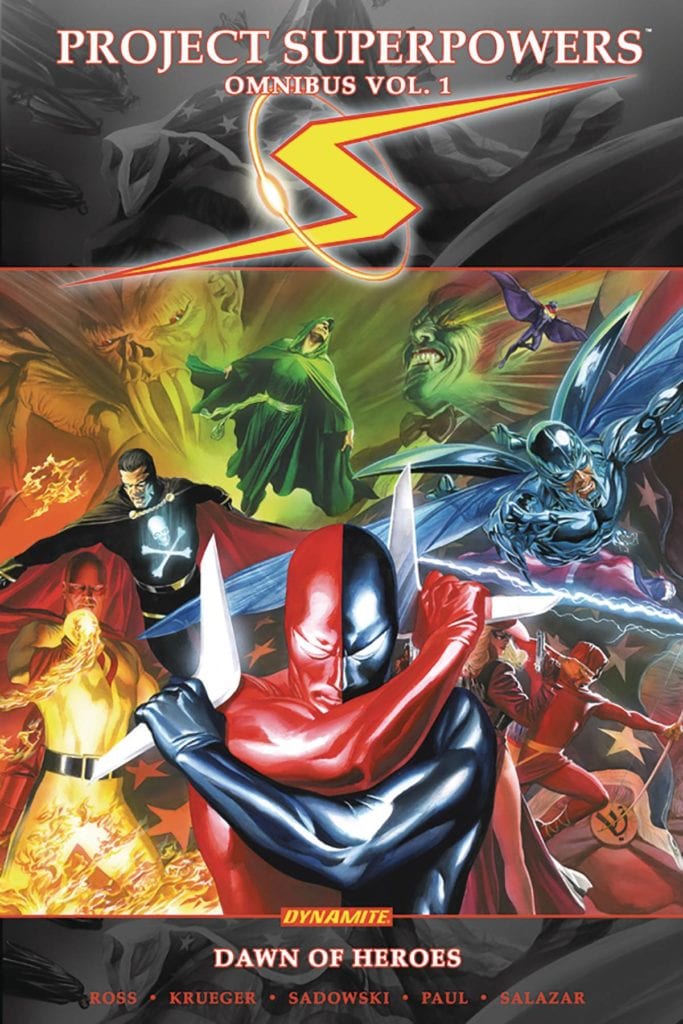 Ross and Jim Krueger’s Project Superpowers goes into greater detail about this. When WWII is almost over, a former superhero imprisons his colleagues in Pandora’s Box to imprison the world’s evils. Something about hope and evils being complementary. But all this did was allow corporate greed to fester by taking advantage of the public’s vices with distractions. Because if there’s no hope, then what’s the point of going through life’s struggles? The only remaining superheroes, the Dynamic family, are androids who, with their lack of needs, see themselves as gods. All of this allowed them to dominate the world economically as cultural mascots. Rather than symbols of virtue, they’re commodities to their corporate overlords. It’s at points like these that realism and pessimism rule out optimism. Hence why the return of the Superpowers is a need to fight against a bleak reality. 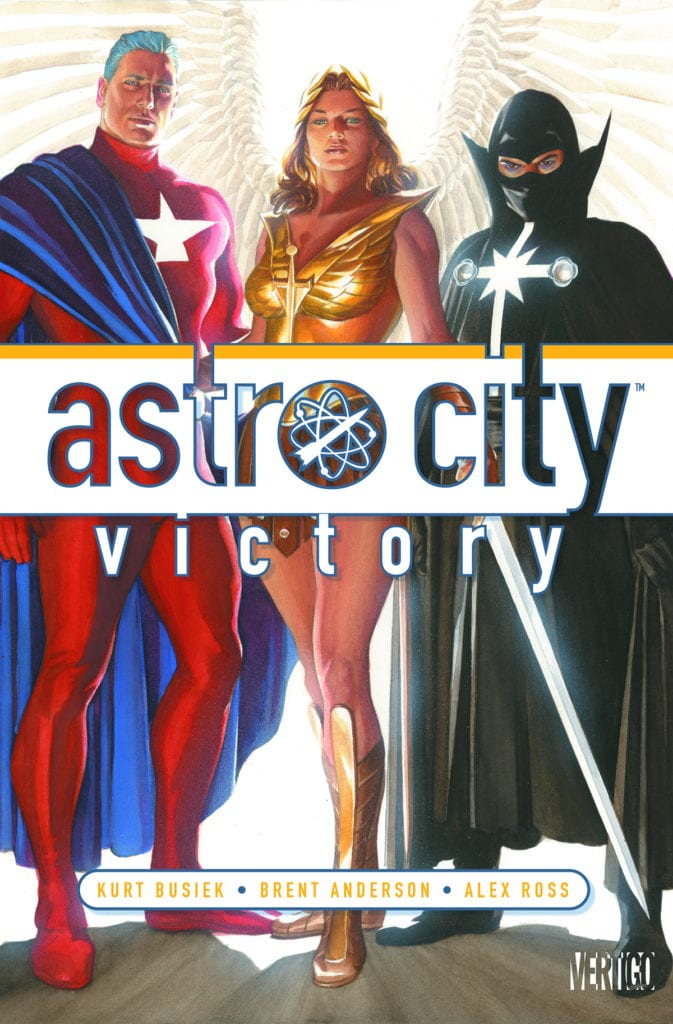 Perhaps the most incredible display of Ross’ views on superheroes is the ones he shares with Kurt Busiek. Astro City is where the tropes, characters, and settings get a good look and build themselves back up. The lives of civilians like Pete Donacek, a hotel doorman, is just as meaningful as someone like the Superman-esque Samaritan. They’re people just doing their best to help others to the best of their ability, often without reward or acknowledgment. Because superheroes are not about being the highest authority, they’re just people trying their part to make things better. Just look at the Samaritan and his annual meetings with his archenemy. It’s not a battle of powers and fists; it’s trying to find a compromise no matter what. Because despite how bleak it seems that no progress can be made for either Samaritan or Infidel, the fact they keep trying out of respect towards one another is because the potential is always there.

Superheroes Are Here To Stay

With all of this in mind, Ross and all of his collaborators present why superheroes still have a place. Sure some people are going to grow out of some characters or settings. But that doesn’t mean these heroes are not welcome to work out their kinks. Otherwise, people will only remember them for their flaws. So much that people will turn against them entirely under certain circumstances beyond anyone’s control. But then who will people think of when a pessimistic reality is all that remains? Superheroes might represent a better world, but it’s the people they inspire or try to that make a difference. Regardless of what anyone thinks, superheroes are flexible in their messages to humanity. For all of the deconstructions to hopes and dreams, a little optimism can rebuild everything.

What do you think? Does Ross’s work represent a pinnacle of superheroism? Or are superheroes reactionary nature just irrelevant in these times? Leave your thoughts in the comments.