The AGE OF X-MAN is over, Lonnie Nadler and Zac Thompson’s mutant utopia comes crashing down. AGE OF X-MAN: OMEGA wraps up this X-Men event. 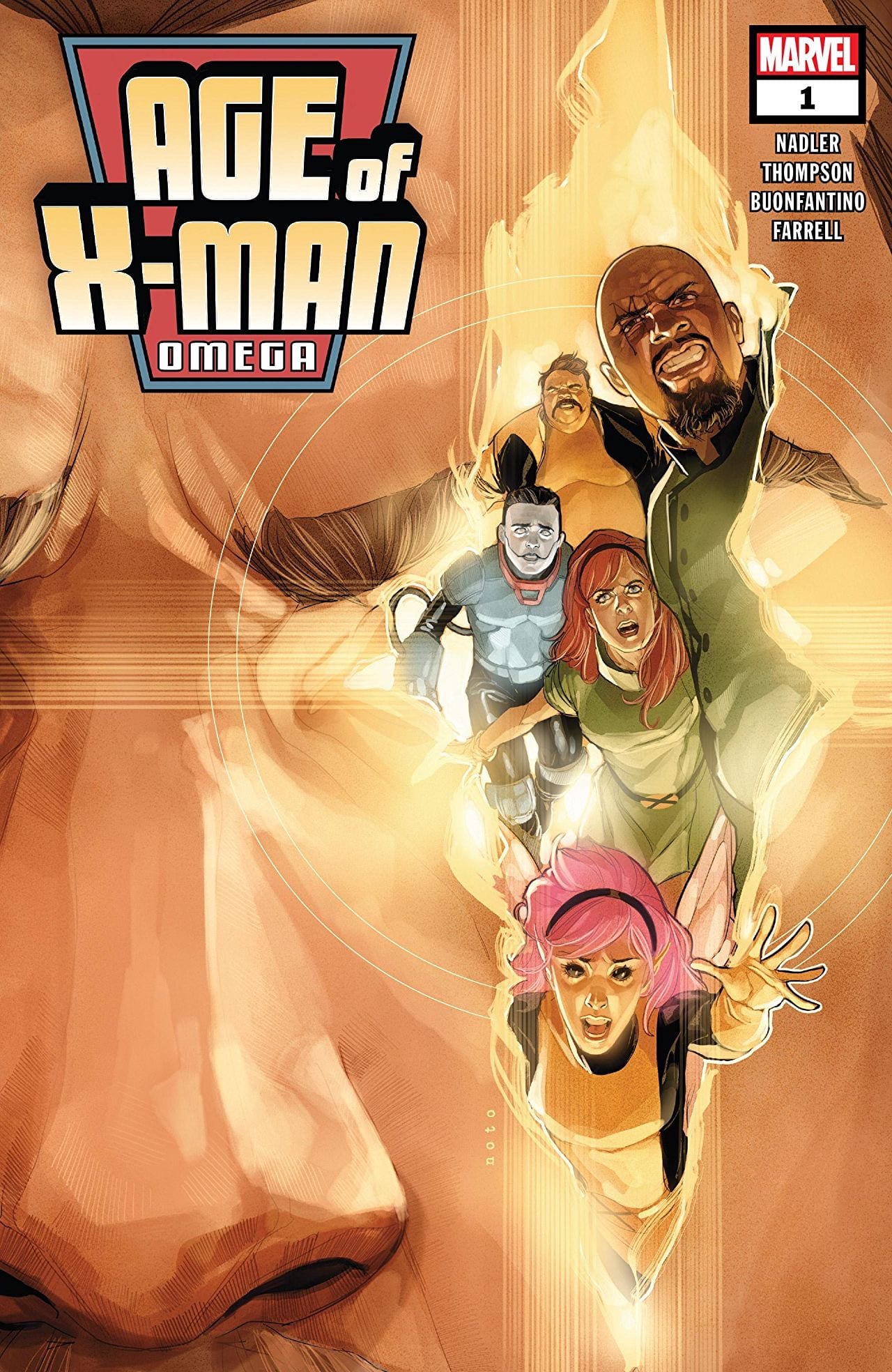 Marvel loves to do these “Omega” epilogue issues following event stories, we just saw the War Of The Realms one last week. What’s different with Age Of X-Man is that this doesn’t serve as final closure and teases for future stories. Age Of X-Man: Omega is the legitimate final chapter, a finale for all six of the books at once.

The false world that Nate Grey created comes crumbling down as the rebellious mutants awaken from their dreamlike state. You can’t keep the X-Men from their family and duties for too long.

Thompson and Nadler asked interesting questions and took us down intriguing paths throughout Age Of X-Man. It may not have been the most explosive or action packed X-Men event, but it was never supposed to be. This was an intellectual exercise, posing questions and performing thought experiments much like X-Man himself.

This may have been an event that wasn’t for everyone in the mutant fandom community, but you can’t deny that it was very much it’s own. Age Of X-Man certainly wasn’t an X-Men story we’ve seen before. 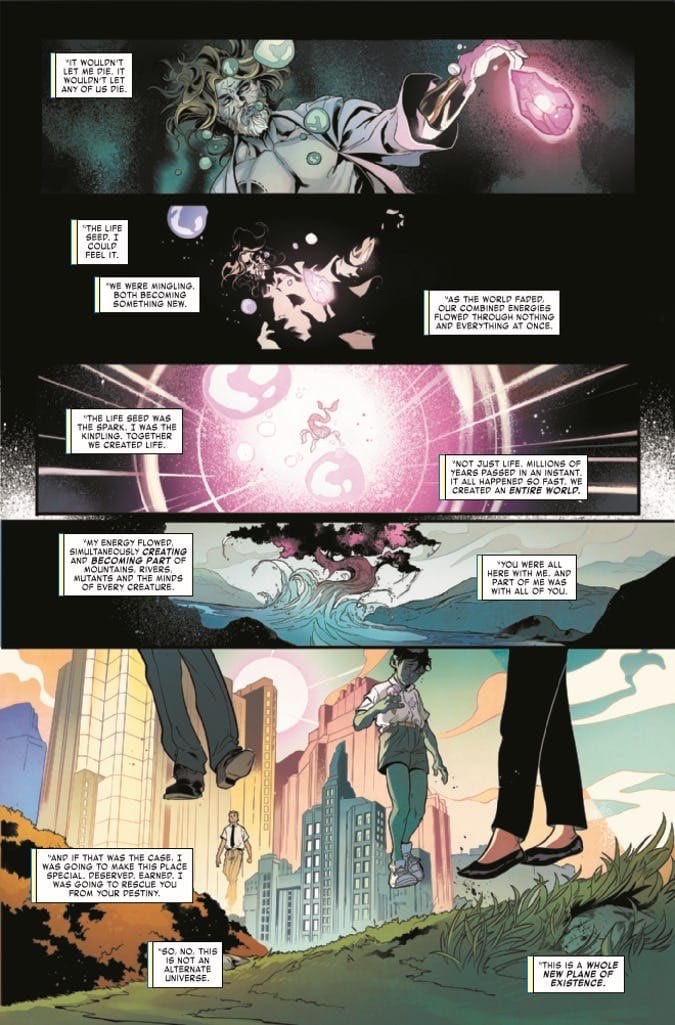 We got to see what it would be like for Magneto’s childhood dream to come true, a world where mutants are the only species in town. His vision wasn’t fully formed thanks to the misguided rules and policing that Nate Grey enforced.

At the conclusion of this story, a piece of Magneto stays behind with Nate so they can dream it all up again from scratch. Whether or not we ever revisit this plane of existence, it’s a satisfying ending for both characters after going through what this Omega issue provided them.

Artist Simone Buonfantino provides an emotional farewell for our characters. This is a stressful and complicated ending and the art illustrates that superbly. Our story moves along at a brisk pace, Buonfantino lays it out in an easily digestible spread. The scene with Iceman making that young kid in the diner feel safe was a heartwarming and memorable moment.

Colorist Tríona Farrell breathes one last breathe of life into this world before it’s erased. It’s a bright and colorful world with a tinge of darkness peaking out from underneath. The pages of our X-Men transitioning back to their normal selves are particularly beautiful. 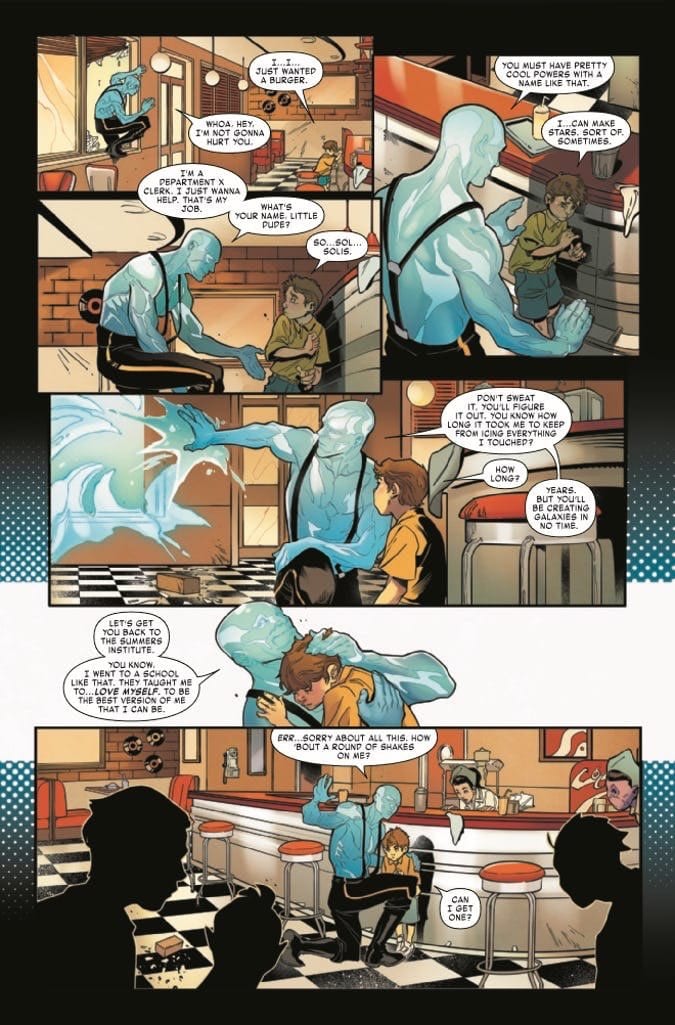 What these characters have just gone through, to now go back to their actual reality puts many of them in an interesting place to begin this new Hickman era of X-Men comics. This wasn’t an event that promised to shake things up forever or alter our favorite characters, but it definitely changes the way some of these mutants may think going forward.

Age Of X-Man makes a fine addition to the overall continuity of X-Men comics and history of major events. It may have been overshadowed by War Of The Realms happening concurrently, but I believe this is a story that will continue to be effective and age well.

Overall, Age Of X-Man may not be the most crucial bit of X-Men reading but it most definitely accomplishes what it set out to. Thompson and Nadler’s vision is delivered clearly throughout and the themes explored are worth the reader’s time.

Age Of X-Man: Omega wraps up all six stories at once without turning into a convoluted mess. This is a final chapter rather than an epilogue, and for that it’s one of the best Omega issues Marvel has published in a while.