Scout Comics‘ Midnight Sky #1, by James Pruett, Scott Van Domelen and Ilaria Fella is the start of brand new science fiction series that builds an effective mystery right from the start and thrusts readers into a frighting and resonant post-apocalyptic world.

What would you do if you discovered your son wasn’t really your son? He may look like him, act like him, but deep down in your soul you just know… he’s been replaced. Then your worst fears are realized when the light hits his face just right and you accidentally see his true appearance for yourself. But he isn’t the only “different” one that you discover… your neighbor, your friend, even your husband. Do you scream? Do you run? Or do you fight back? And how can it be that your daughter is the best and, perhaps, last hope for mankind? 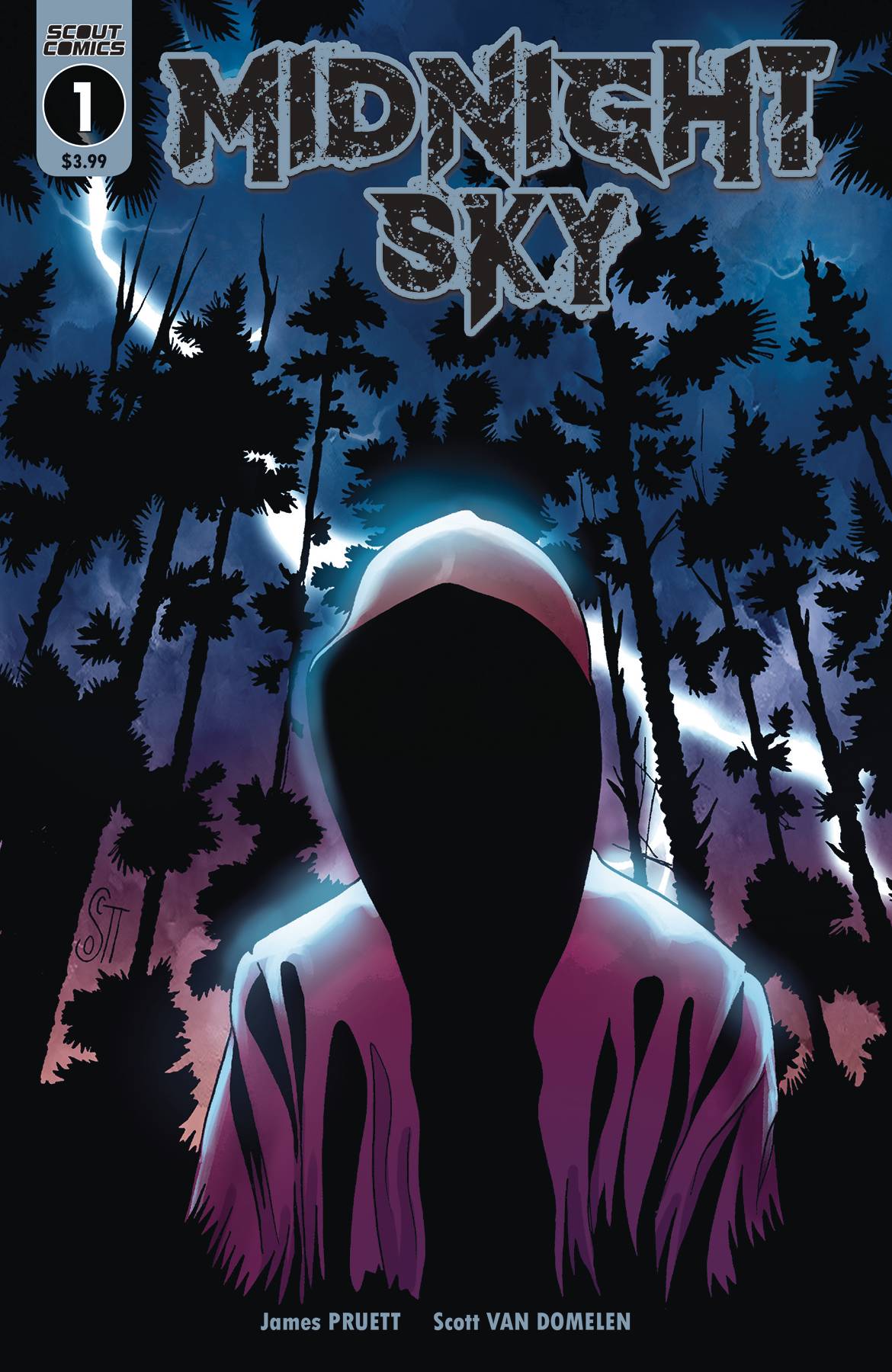 Midnight Sky #1 starts with a simple scene, a family is packing for a big move. Jacob, the father, has landed a new job and everyone is coming with. It’s a relatable, well-recognized scene for about 3 or 4 pages and then shit gets weird. Something happens (no spoilers but let’s just say it’s violent and disturbing) that lets readers know something is off about this family. And then we get a time jump and we’re full-on immersed in a new, unpredictable post-apocalyptic world. The effect is jarring, but Pruett’s writing is strong in those early scenes, so the reader is invested in what is happening and why. Pruett also writes the main character, Jennifer, in a way that makes her compelling. We can see her resilience and independence early on, so there’s no question her and her children would be survivors after whatever even decimated the world.

And the event in question, although hinted at, is not fully explained just yet. We are given clues without much exposition, a rarity in sci-fi stories attempting to build a mythology and world. It’s not all spelled out and may require a second read to pick everything up, but Pruett is building a large mystery here and mysteries are meant to be poured over and studied.

The pacing of this first issue is great. It unfolds at an even clip, and even with all the time jumping and flashbacking, it’s never confusing. The reader is always aware of time and place.

The art in Midnight Sky #1 is tight, clean and very effective. Scott Van Domelen’s pencils linework strikes a good balance between delicate and grit. The result is a subtle surrealism that is perfect for this kind of story. When you throw in Ilaria Fella’s muted, evocative and moody coloring, the result is a book that has tons of creepy atmosphere, even in the early scenes before the shit hits the fan. And when things do fall apart, the world we are shown is bleak, and both alien and recognizable (shout out to the story being set here in Florida!)

The characters faces are also very expressive, and there’s a strong use of closeups and reaction’s that are easy to read. Facial expression (or ‘acting’) is difficult to pull off in comics, and the art team here does it very well.

Midnight Sky #1 shows tons of promise as it builds it’s characters, mystery and world. Its scope is both grounded and epic. It’s a book readers should defietly give a chance once it hits their local comic shop in September. So be on the lookout and grab it!

Advance Review: MIDNIGHT SKY #1 Creates An Intriguing Mystery And A Frightening WorldMidnight Sky #1 shows tons of promise as it builds it's characters, mystery and world. Its scope is both grounded and epic. It's a book readers should defietly give a chance once it hits their local comic shop in September. So be on the lookout!