Review: JOIN THE FUTURE #1 Invites You Into One Thought-Provoking World

The Future. Ultra-modern megacities reward millions of their citizens with a completely funded life, with every need met, from food to housing and healthcare, in order to compete in an economic power struggle in which population is key. But a few rural residents still cling to their independence in what last American small towns are left. When a nearby megacity pressures the people of a small town join up or else, a teenage girl named Clem will learn how far she’ll go to defend her principles. 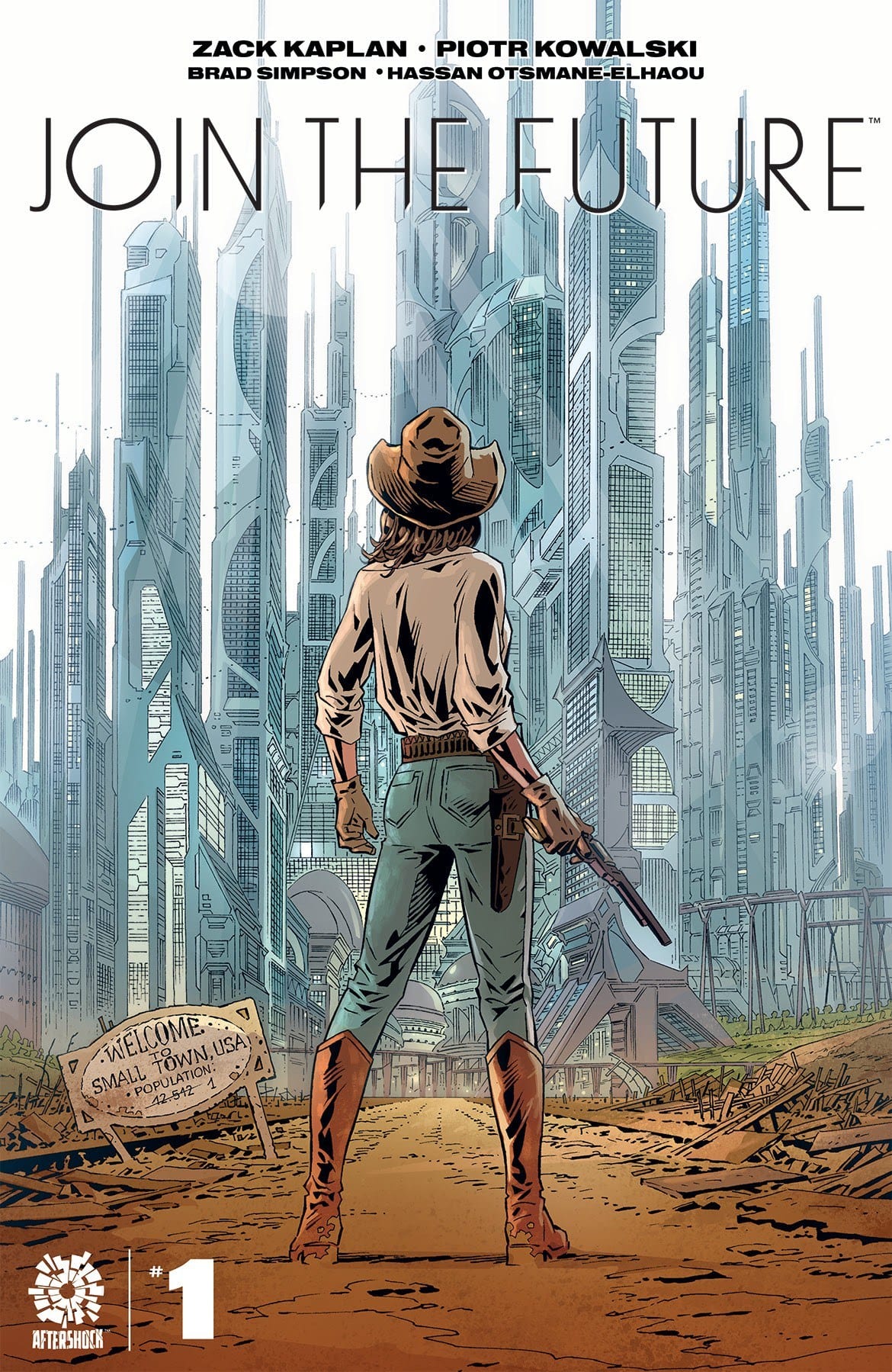 Writer Zack Kaplan is no stranger to science fiction. He has always had an ability to conceive high concept ideas and then ground them with relatable characters. Kaplan does that once again in Join The Future, and it works great.

The issue opens with exposition, but as it’s a video inviting people to join the megacities; the format and info dump work. The fact that it feels artificial; full of corporate-speak and even current controversial ideas like universal basic income makes it that much more authentic and relevant. 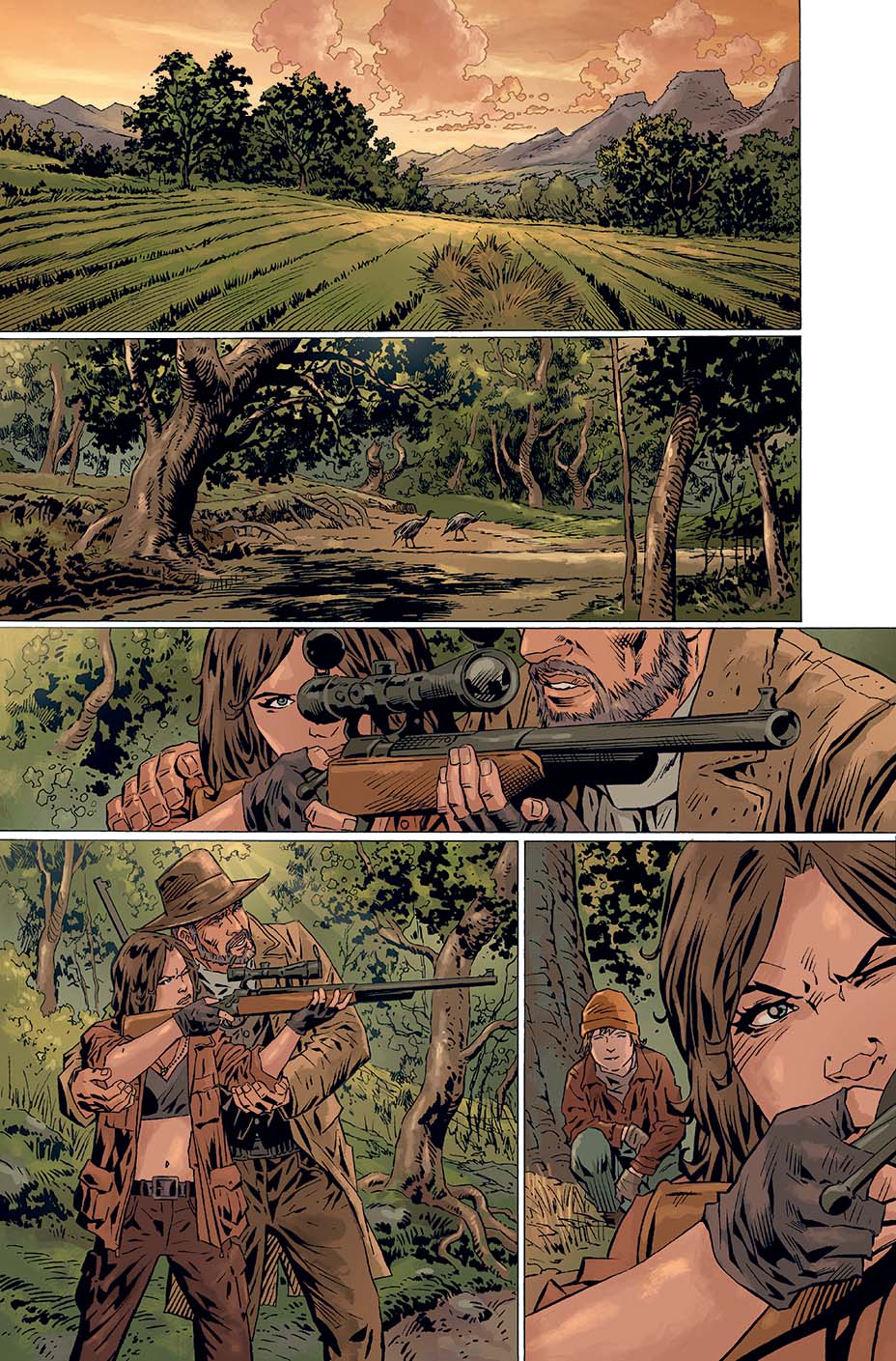 So when Kaplan brings us into the small town and the protagonist Clementine Libbey, daughter of the town’s Mayor, we are immediately jarred as to how quiet and personal those scenes are. As Clem’s father teaches her to hunt with her brothers, Kaplan sets up not only each member of the Libbey family on their own but also their dynamic as a family as well (the scene goes from quiet to loud fast!). It’s a great use of dialog and action. A quiet scene between Clem and her brother (who is hiding to listen to music on a forbidden electronic device) is not only a highlight, but it’s a scene that leads to a tragic ending.

And what an ending it as. No spoilers but worlds collide and the reader is left saying ‘Holy Shit’.

Sci-fi comics have to rely heavily on art. Creating a new world that is believable is not easy. It takes attention to details most artists take for granted. Things like new and different kinds of architectures, clothing, tech, etc. In Join The Future, Piotr Kowalski and Brad Simpson not only have to do that, but they also have to create the more western-influenced vistas as well. They knock it out with both. The attention to architecture and detail in the future scenes have an Otomo (Akira) quality to them, with the colors of falling into a very Euro-comics palette. In contrast, the small town ‘western’ scenes almost have a Tim Truman(DC/Vertigo’s Jonah Hex and various westre vibe to them. It’s a great balancing act that both Kowalski and Simpson do together. 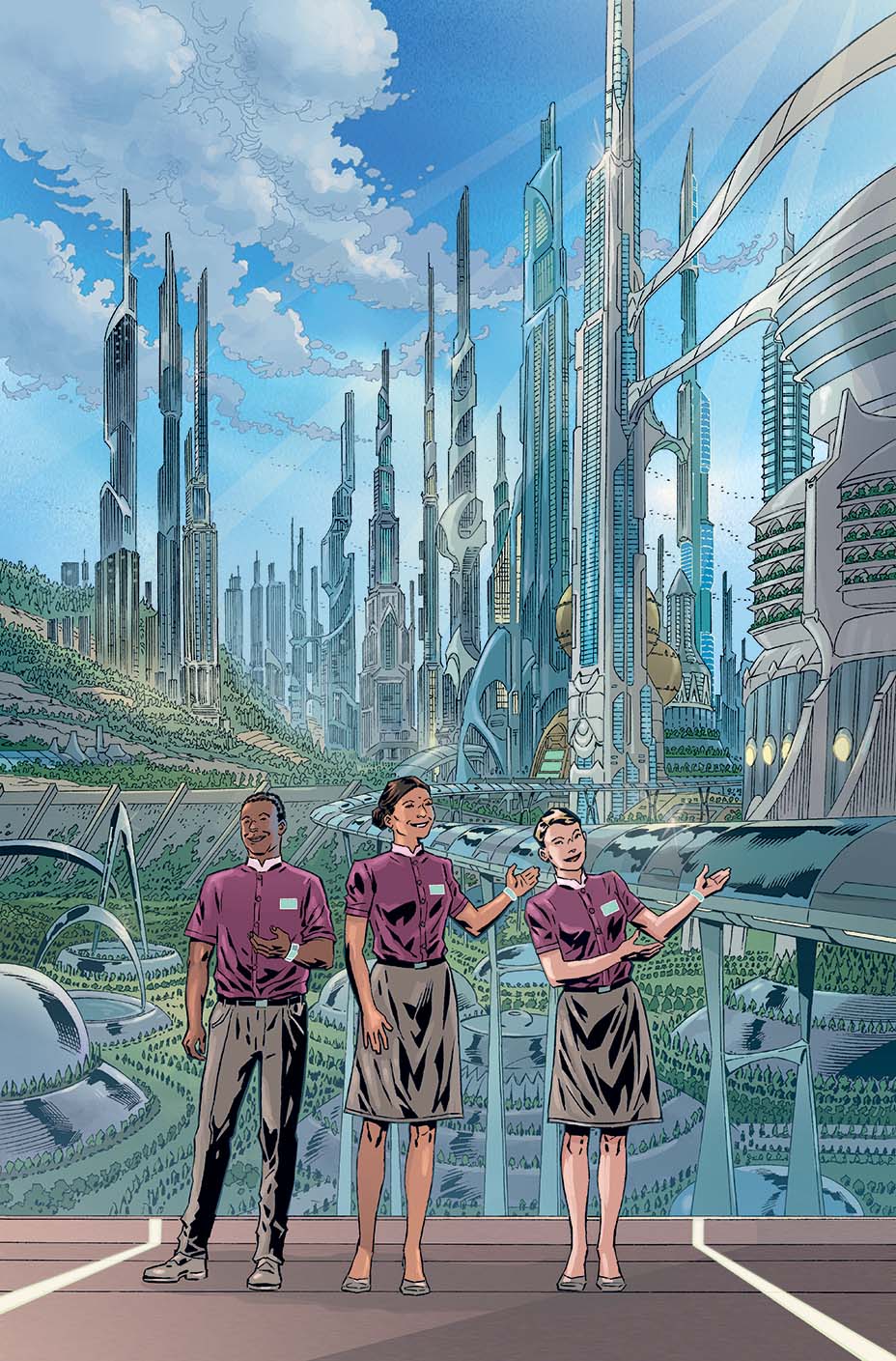 This is also a beautifully lettered comic. There are a variety of fonts and the pages never feel cluttered. The word placement only adds to the composition of the page and keeps the reading flowing.

Join The Future is not just a compelling and beautiful comic. It’s also the kind of emotionally engaging and thought-provoking story that makes the best use of speculative fiction.

Join The Future is out March 4th, 2020 from AfterShock Comics is available at your local comic store.

Review: JOIN THE FUTURE #1 Invites You Into One Thought-Provoking WorldJoin The Future is not just a compelling and beautiful comic. It's also the kind of emotionally engaging and thought-provoking story that makes the best use of speculative fiction.