DC Comics already has a Joker-centric Black Label book on their hands with Batman Damned — and all the controversy that’s come along with it. Now the publisher has announced a new BL book debuting this October: Joker/Harley: Criminal Sanity. Much like Sean Murphy’s Batman: White Knight, the series puts a new spin on an old relationship. 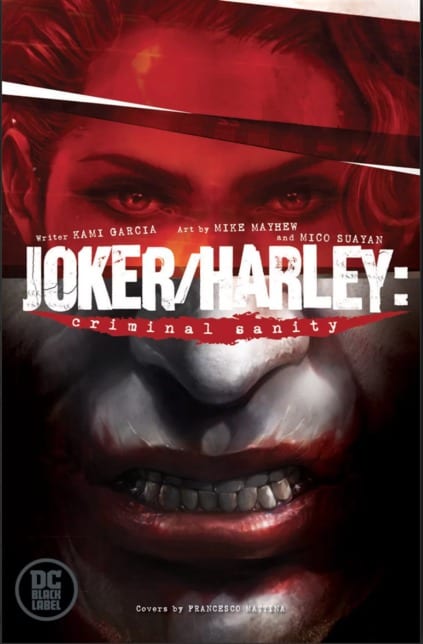 Joker/Harley will be written by Kami Garcia (author of the upcoming Teen Titans: Raven) and illustrated by Mike Mayhew and Mico Suayan. DC put out this plot description:

The nine-issue psychological thriller follows Harley Quinn, the young and brilliant forensic psychiatrist and profiler consulting for the Gotham City Police Department (GCPD), as she pursues a vicious killer terrorizing the city. She has no idea the investigation will bring her face-to-face with the most notorious serial killer in Gotham’s history—the Joker.

“There is no character more terrifying than the Joker. He is one of the most complex psychopathic killers ever created. I wanted to approach the project as if  the Joker was a real person—an intelligent and sane psychopath, who kills because he wants to, not because he suffers from delusions… In the series, Harley is the only character with the skill set and intelligence to hunt the Joker, but the investigation will force her to confront her own inner demons.”

“When Kami came to us with the idea of profiling one of the most mysterious and dangerous characters in the DC Universe, it felt so new and original. Kami, Mico and Mike are taking great care to ensure that the mystery surrounding the Joker and Harley Quinn remains intact, while delivering a story that’s both compelling and haunting. This series is exactly the kind of unique, standalone story that’s perfect for DC Black Label, one we hope will engage both casual and new fans of these characters.”

Are you interested in seeing the Harley Quinn-Joker story retold as a Black Label, out-of-continuity series? Leave us a comment!