What can be done about an enraged mutant?

The last issue of X-Men Red ended by creating a new team of mutants. With the second issue, we see that Agent Brand is forming her own crew. Al Ewing has a good name at Marvel comics. You’d be hard-pressed to find someone who didn’t love his run on Immortal Hulk. Ewing has also worked his magic when he joined the X-universe with S.W.O.R.D. He’s joined on this issue by Stefano Caselli on pencils, Federico Blee on colors and letters by Cory Petit.

Al Ewing starts off this issue with a flashback to something Jonathan Hickman did in his X-Men run. Vulcan struggling with his anger and the fire inside him is a plot point that was touched on by Hickman and hasn’t been expanded on until this issue. Ewing shows us that Vulcan has kept his cool in the past, the fire is overtaking him and it’s uncontrollable. The most interesting thing about this issue is that Ewing gives us Abigail Brand’s X-Men team. This consists of shady mutants who have fought on both sides before. The team is led by Cable, who is also no stranger to controversy. Ewing produces a nice balance of social commentary and action in X-Men Red. We witness the Arakii people wanting to fight for themselves and get upset when Brand’s team attempts to help them. This plot point works on many levels but is good to see the parallels to today’s society. 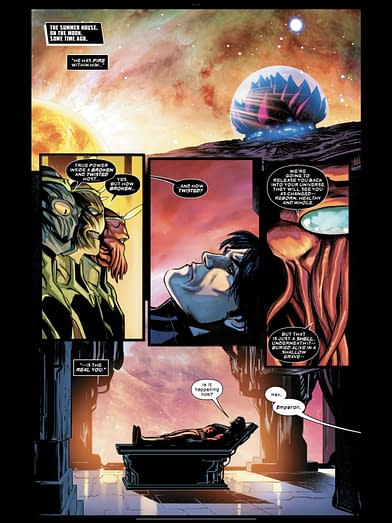 The pencils by Stefano Caselli stand out this issue. The panels where Brand and Manifold argue feel very close and intimate. This works because Caselli uses many close-up panels to show the different emotions that Manifold is going through. Brand’s face and emotion remains unchanged, which says a lot about her. The Arakii villagers have a good look to them. Caselli draws them almost creepily. We’re so used to seeing most of our heroes looking like they can pass for normal in this book, but Caselli does a great job of showing us mutants that don’t have that benefit. Caselli is at his best this issue when he is drawing a lot of emotion on character faces. Vulcan is an excellent example of this because he’s a conflicted character. Caselli shows us a Vulcan who has rage inside of him through all the emotions we see building in him this issue. The pencils for X-Men Red #2 are top-notch and will only continue to get better with Caselli.

The colors are extremely important in a major book like this. Federico Blee is a professional who knows how to liven up a page. Things as simple as the glow from a blue cube shining on Arakii residents is made infinitely better with Blee’s experience. X-Men Red is an appropriate title for this series since red is a color that is used a lot in this issue. When Vulcan rages, Blee uses red to signify this. Blee gives Mars a gorgeous red background. Of course, Vulcan also has red on his costume. In the color world, red is considered a hot color. This makes sense that a hot-tempered character like Vulcan would be surrounded by red.

The letters by Cory Petit are effective and useful. As Vulcan and Storm tangle in a battle, Vulcan unleashes some energy. Petit places a “Kra-Kroom” perfectly on the right side of the panel. It’s lined up with the energy being released from Vulcan’s body. As Cable loads his gun, a “click-clak” is over the gun as it’s being loaded. There are panels that are dialogue-heavy, but Petit makes sure to not have any of the word balloons cover the faces of the characters in the panel. 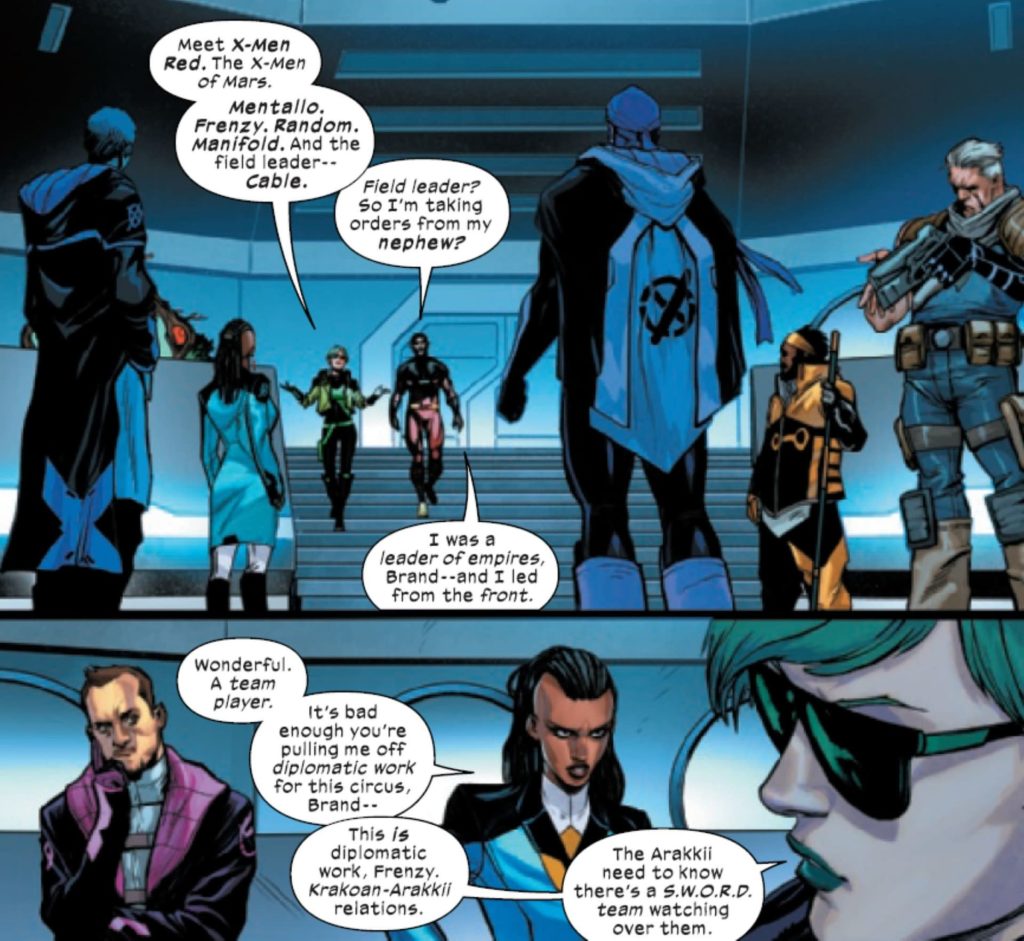 X-Men Red #2 adds more character development and plot to an already strong story. Al Ewing has been building to some of these events since his work on S.W.O.R.D. The pencils by Stefano Caselli are near flawless and get better with every issue. X-Men Red #2 is on sale at a comic shop near you.

X-Men Red #2 raises the stakes and creates a divide on ArrakoREVIEW: X-MEN RED #2 Lights A Fire Inside Vulcan