Review: THE IMMORTAL HULK #21 Explores The History Of General Fortean

James Fortean, much like his mentor General Thunderbolt Ross, would like nothing more than to destroy both Bruce Banner and the Hulk. So much so that he vowed to do whatever it took to subdue the monster, even if it cost him his reputation. THE IMMORTAL HULK #21 is the story of Fortean’s fall from grace; it explores the motivations behind the character’s actions and the process he went through to create Shadow Base.

The issue immediately takes readers to Shadow Base where Fortean and Dr. Charlene McGowan discussing their next plan of attack against the Hulk. Fortean decides to use an experimental armor that will allow him to traverse a great distance into the base of Gamma Flight’s operations in the hopes he will access the husk of Abomination, which could give him a leg up in the fight. McGowan pleas with him to choose a safer route, but the hardened military man claims he must bring order to the chaos that is the Hulk.

How the general came to this unyielding position is beautifully explained through flashbacks. Readers are transported into Fortean’s memories, witnessing the devastating moments that fostered a rock-hard determination to fight for order through any means necessary. It is here we finally feel some sympathy for the character, ultimately finding common ground in his desire for peace. And the method through which Fortean thought he could find it was outside of conventional military procedure, thus leading to the creation of Shadow Base.

Writer Al Ewing has often shifted the first-person narration of his THE IMMORTAL HULK run to supporting characters to fully flesh out the character dynamics affecting the story. But the way in which he unpacks the pivotal moments of Fortean’s history is nothing short of legendary.

Ryan Bodenheim joins the illustration team as a guest artist and does not disappoint. His penciling and inking provide the clean-cut details of Fortean’s memory scenes while simultaneously showing a progression toward less defined illustrations to represent the general’s descent into chaos. Likewise, Paul Mounts follows suit, starting off with fewer color palettes and then expanding them as the scenes become more chaotic. 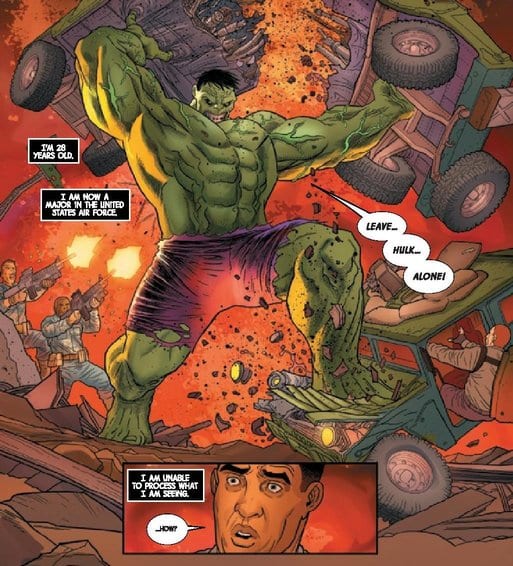 Alex Ross’ cover for THE IMMORTAL HULK #21 features Fortean viewing monitors showing various scenes from the Hulk’s history. This gives us a look into the character’s obsession with the green giant.

This issue does an amazing job of taking a seemingly one-dimensional antagonist and giving him depth one could sympathize with. It’ll be intersting to see whose level of hatred is higher: the Hulk’s or Fortean’s.

Did you like this issue’s focus on Fortean? Let us know in the comments below!

Review: THE IMMORTAL HULK #21 Explores The History Of General ForteanA brilliant humanization of one of the stories main antagonists. One actually feels sympathy for the character who's been trying to destroy Bruce Banner.