Review: RONIN ISLAND #8 Shows What It Means To Be A Samurai

The next installment in Boom Studios’ RONIN ISLAND series, hitting stores on Wednesday, November 13th, takes place in the fall-out of Hana and Kenichi’s fight against the Shogun’s forces in issue #7. The epic battle concluded with Hana’s stabbing of General Sato, the second-in-command who showed compassion for the girl despite his position in the Shogun’s nefarious faction. Now the samurais are fleeing for Ronin Island, but will they make it there ahead of the Shogun’s army of soldiers and Byonin?

General Sato is a complicated character: he’s attempted his desire to save his own people with the overwhelming might the Shogun holds over them. We’ve seen this play out through his quasi-mentoring of Hana despite their enlistment in the empire that unleashed the murderous Byonin. All of this context makes it that much more shocking when she leaves him to bleed out. However, his response might be more shocking still. 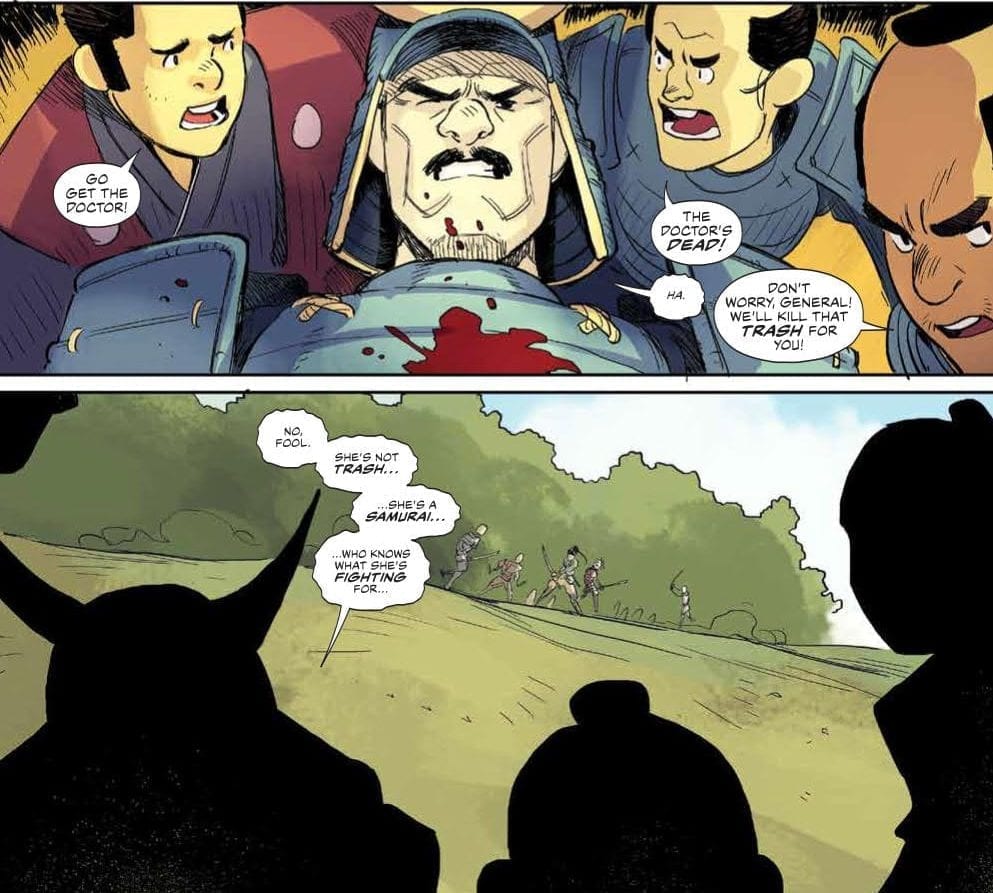 Even in his dying breath, Sato is able to recognize the reason Hana is a true samurai—she knows what she’s fighting for. What’s even more heart-wrenching is the fact that everything he did in service of the Shogun was for his people, no matter the cost.

Elsewhere, readers witness the Shogun’s soldiers corner Hana and Kenichi as they’re attempting to make their escape. Caught off guard, hope seems fleeting for our heroes. But at the last moment their friend Chakan, along with another ally roped into the Shogun’s army, lay their lives on the line for their new friends, showing a commitment to the Island’s cause. 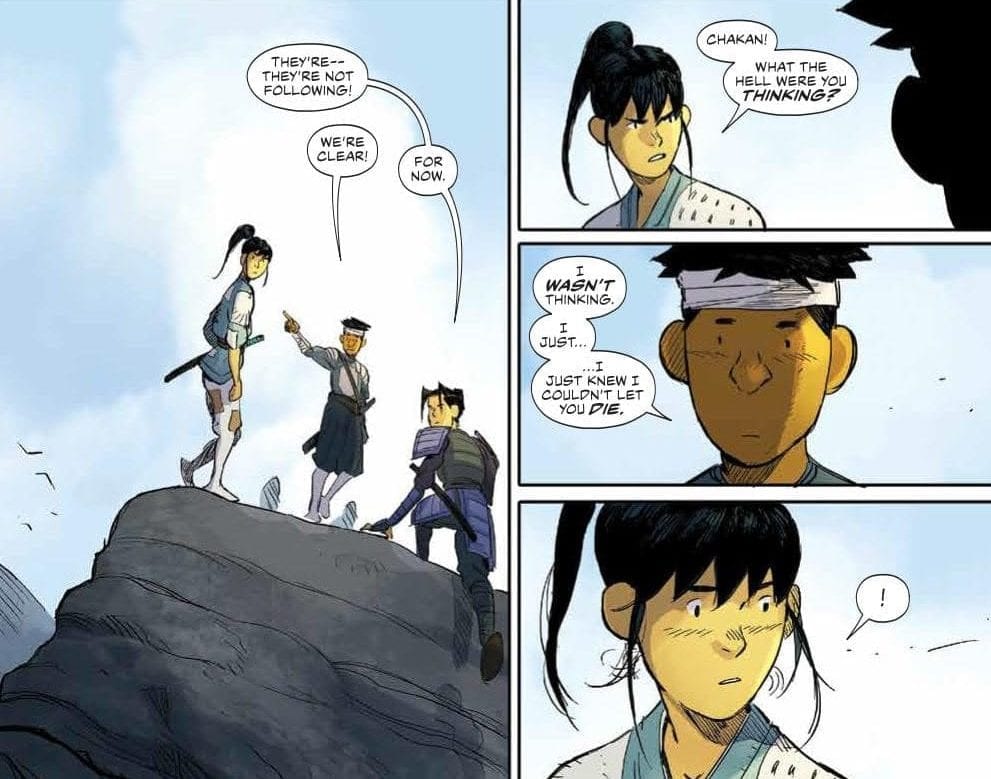 Scenes like these are what make Greg Pak’s writing phenomenal. The way he gets to the heart of issues within these characters’ interactions allows readers to relate to them on an emotional level. We feel we can look up to these characters despite their flaws. And we’re anxiously waiting to see if they make it to the Island before the Shogun’s evil forces.

Giannis Milonogiannis’ pencils and inks, Irma Kniivila’s colors, and Simon Bowland’s letter work capture the essence of this comics tale of betrayal, redemption, and family. The illustrations are simple, yet complex, cultivating an inviting presence while offering highly-detailed renditions of the samurai and solider weapons to instill just the right amount of realism. We see splashes of colors of characters set on relatively bland backgrounds, drawing our attention to the important action. The dialogue boxes add to this effect as well, essentially guiding readers through the flow of each scene.

Giannis Milonogiannis’ and Msassyk’s main cover art features Hana and Kenichi, standing back to back and in contrasting colors, with a deep fissure splitting the earth between them. This reflects the growing tension between them due to differences in approach to liberation.

Ethan Young’s preorder cover once again uses a style reminiscent of East Asian artwork to depict Kenichi and the team of bandits he enlisted, which has become a major point of contention between him and Hana.

RONIN ISLAND #8 wears its heart on its sleeve, giving us a microscopic view into the souls of our favorite characters. If readers didn’t know what Hana and all of her relationships stood for, they definitely do now.

What did you think of Sato’s respect for Hana? Let us know in the comments below!

Review: RONIN ISLAND #8 Shows What It Means To Be A SamuraiRONIN ISLAND #8 wears its heart on its sleeve, giving us a microscopic view into the souls of our favorite characters. If readers didn't know what Hana and all of her relationships stood for, they definitely do now.