Review: KA-ZAR: LORD OF THE SAVAGE LAND #1 – The Resurrection Lesson

From writer Zac Thompson (Yondu, Undone By Blood) and artist German Garcia comes a return to Marvel’s land lost in time with Ka-Zar: Lord Of The Savage Land #1. This opening chapter reintroduces us to the lore and characters within this classic setting while mixing in some welcome new additions. With compelling character conflicts, phenomenal action, and stunning visuals, this will be the next Marvel series to keep an eye on.

“KA-ZAR IS BACK FROM THE DEAD — WITH A WHOLE NEW TERRIFYING SET OF POWERS! The alien Cotati murdered him. The Savage Land brought him back. Lord Plunder has returned — with a vastly new perspective! Now united with Shanna the She-Devil in a mystical merging of life energies, Ka-Zar has new abilities, new needs…and new enemies. An ancient evil has surfaced in the Savage Land — one that is rapidly reshaping the forgotten world and its inhabitants. Ka-Zar and Shanna must fight together to protect their home and family! But their son Matthew has plans of his own…” 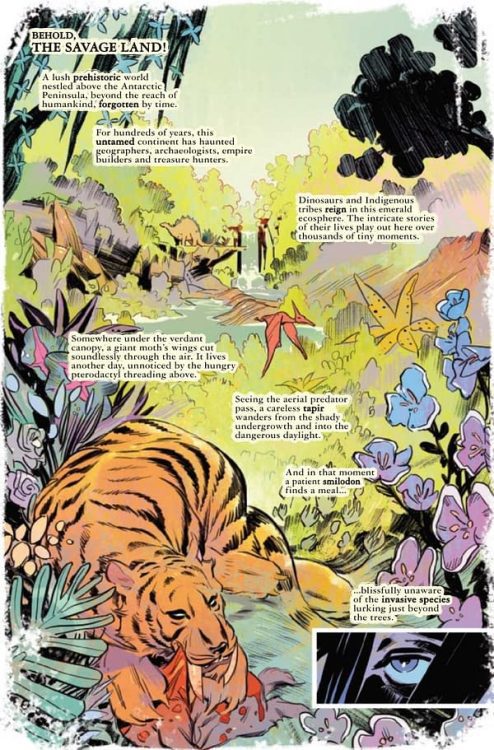 Writer Zac Thompson presents us with this present-day prehistoric tale in smart fashion in Ka-Zar: Lord Of The Savage Land #1. Our titular character  – a.k.a. Kevin Plunder, has recently returned from the dead and is rediscovering himself and his connection to the Savage Land. This is a smart move for those unfamiliar with the Ka-Zar character and this classic setting. Thompson maintains the classic Lee and Kirby sense of discovery and adventure alive, while introducing more contemporary writing elements.

This comic still retains some elements of the 30’s pulp adventures that Lee and Kirby were no doubt emulating. However, Thompson’s presentation of Ka-Zar and his new connection with the island is highly reminiscent of Swamp Thing’s self-discovery in those comics. This isn’t a negative, though. In fact it works well in placing ourselves in Ka-Zar’s perspective with how he’s discovering his abilities, and how he perceives the island and its inhabitants. It’s like having the audience character and the big hero in the same person – so you know, a Marvel comic. We even have the level-headed “mentor-esque” character in Plunder’s wife, Shanna the She-Devil.

The real point of conflict here – aside form the odd T-Rex attack – is Plunder’s relationship with his and Shanna’s son, Matthew. After all, injecting teenage angst into the mix makes for relatable plotlines in your prehistoric adventure story. The tension this particular problem builds will be exciting to watch unfold as the series progresses. 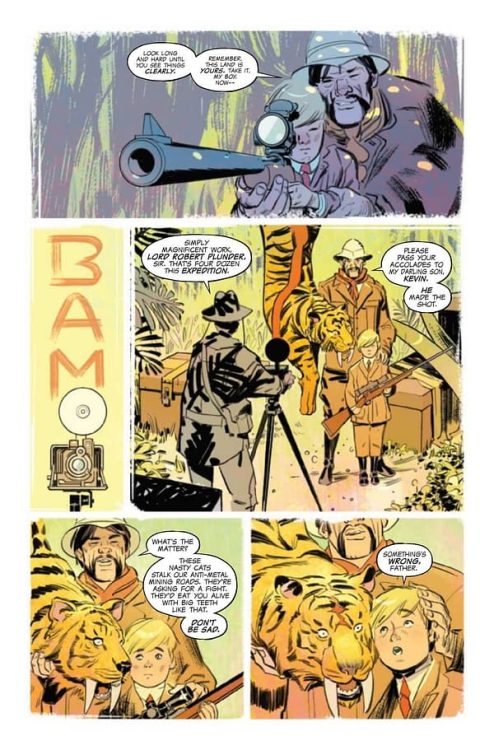 A comic taking place on a lush jungle island is going to need some heavyweight artistic talent to pull off the setting. Fortunately, German Garcia is up to the task for Ka-Zar: Lord Of The Savage Land #1. His soft yet expressive pencils provide immense detail for the sprawling landscape of this island that time forgot. His renderings of prehistoric animals from Smilodons to T-Rexes are unique and are sure to create a lasting impression. The way Garcia draws the main cast is noticeably distinct, and not just in basic design. Ka-Zar remains stern, yet noticeably distracted by his new abilities. Shanna appears constantly at-ease and comfortable in her understanding of the island. Matthew, in true moody teen fashion, appears consistently annoyed or wistful. There’s a classical pulpy feel to Garcia’s work that is unmistakable, and works perfectly for this comic.

Mat Lopes, one of the best colorists working today, blesses these pages with his work. As such, every panel is flush with life and vigor. He uses a less dense color palette than what you see from his work in The Dreaming. As such, there’s almost a hazy dreamlike quality to the beauty on the panels. The jungles and plains are filled with lush plant life and animals of all kinds. The greens and other, wilder colors make the backdrop of much of this comic. Lopes also utilizes the sky for much of his color work, with sunrises and starry nights providing reflective and tonally rich backdrops.

The lettering from Joe Caramagna is energetic and provides a major lift to the reading experience. His fonts are constantly shifting with the tone and action on the pages. His SFX lettering is fantastic as well, exploding off of the page with the rest of the action. This is a amazing looking comic book that lives up to the Jack Kirby legacy. 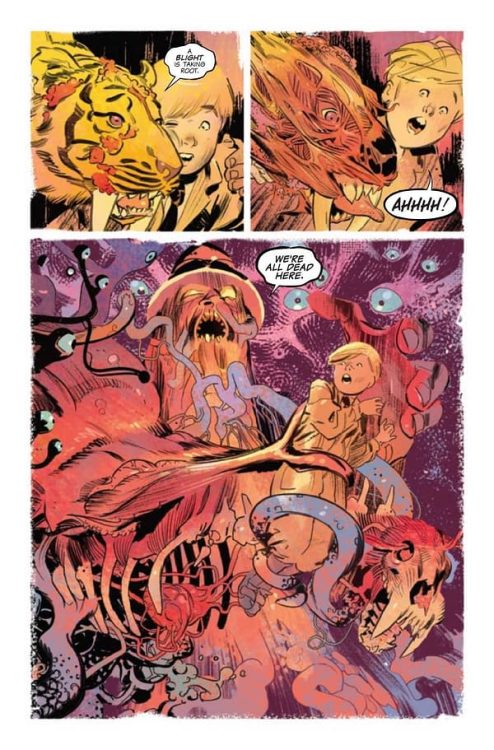 Ka-Zar: Lord Of The Savage Land #1 is a triumphant return for this classic character. Writer Zac Thompson borrows ideas from in and out of the Marvel universe to tell a compelling  and action-packed chapter of self-rediscovery and tension. The visuals from German Garcia and Mat Lopes are stunning and full of life and energy – much of which is trying to eat you. Be sure to grab this issue when it hits shelves on 9/8!