SUPERMAN #19: “I’ll Take a Superman Story with Everything on It”

DC Comics’ Superman #19, written by Brian Michael Bendis, with pencils by Ivan Reis, inks by Joe Prado, Danny Miki, Julio Ferreira and Oclair Albert, colors by Alex Sinclair and lettering by Andworld Design, takes every kind of great Superman Story and says “I’ll do it all.” With the ongoing repercussions of Clark’s identity reveal, Bendis and company balance heart-to-hearts with alien brawls in a brilliant ode to the Man of Steel.

It’s tempting to say that Bendis (or DC Comics) is dragging out Clark’s big reveal. But the reasons for thinking that might be precisely what makes this series great. Where other series would skip past the nitty-gritty of what it means for a hero to tell the world who they are, Bendis attempts to deal with the fallout head-on. And while much of the issue is made up of heartfelt conversations, Bendis knows when to pull back. We hear of a statement Clark wants to make to the bullpen, though we never hear the speech itself. We see fellow heroes approach Clark, but we don’t hear what they say. Bendis knows we love these characters so much; nothing he could write would do these moments justice. And in doing so, we each get to hear a different statement, or a different word of encouragement, filling in the dots in our own way. 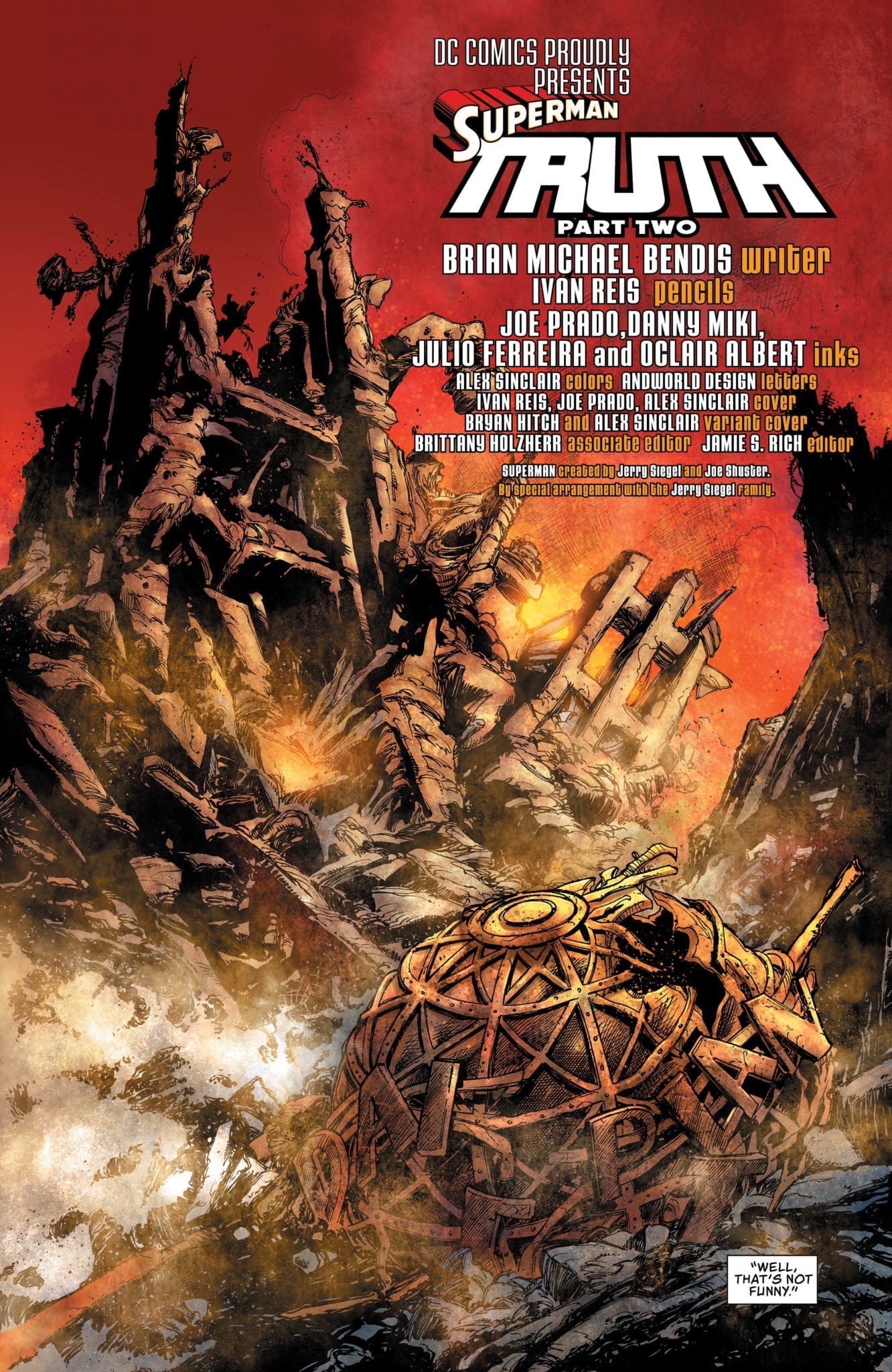 Reis, Prado, Miki, Ferreira, and Albert pool together to give this issue its intimacy. Speaking through the smiles of the characters, or the somber looks in a sea of smiles, they remind us what Superman means to everyone. From his co-workers to the many civilians of Metropolis, the Man of Steel has a place in everyone’s heart. The team on inks and pencils makes that clear. They also gradually zoom out near the end of the issue, to prepare us for a change of pace. With cosmic clashes, zooming back in on snarling faces, the team shows us Clark can be more than heartwarming. He can be a lot of fun too.

Sinclair’s colors play a game with the reader. Winding down to darker tones, like the calm before the storm, Sinclair teases moments of grief that never arrive. It prepares the reader for the worst, only to then offer up the best. Similarly, Sinclair switches to brighter tones in happier moments and even in moments of danger. Sinclair truly knows how to use a color pallet to pull on heartstrings. It allows us to feel Clark’s triumphs and sets us on the edge of our seat for Superman’s trials. 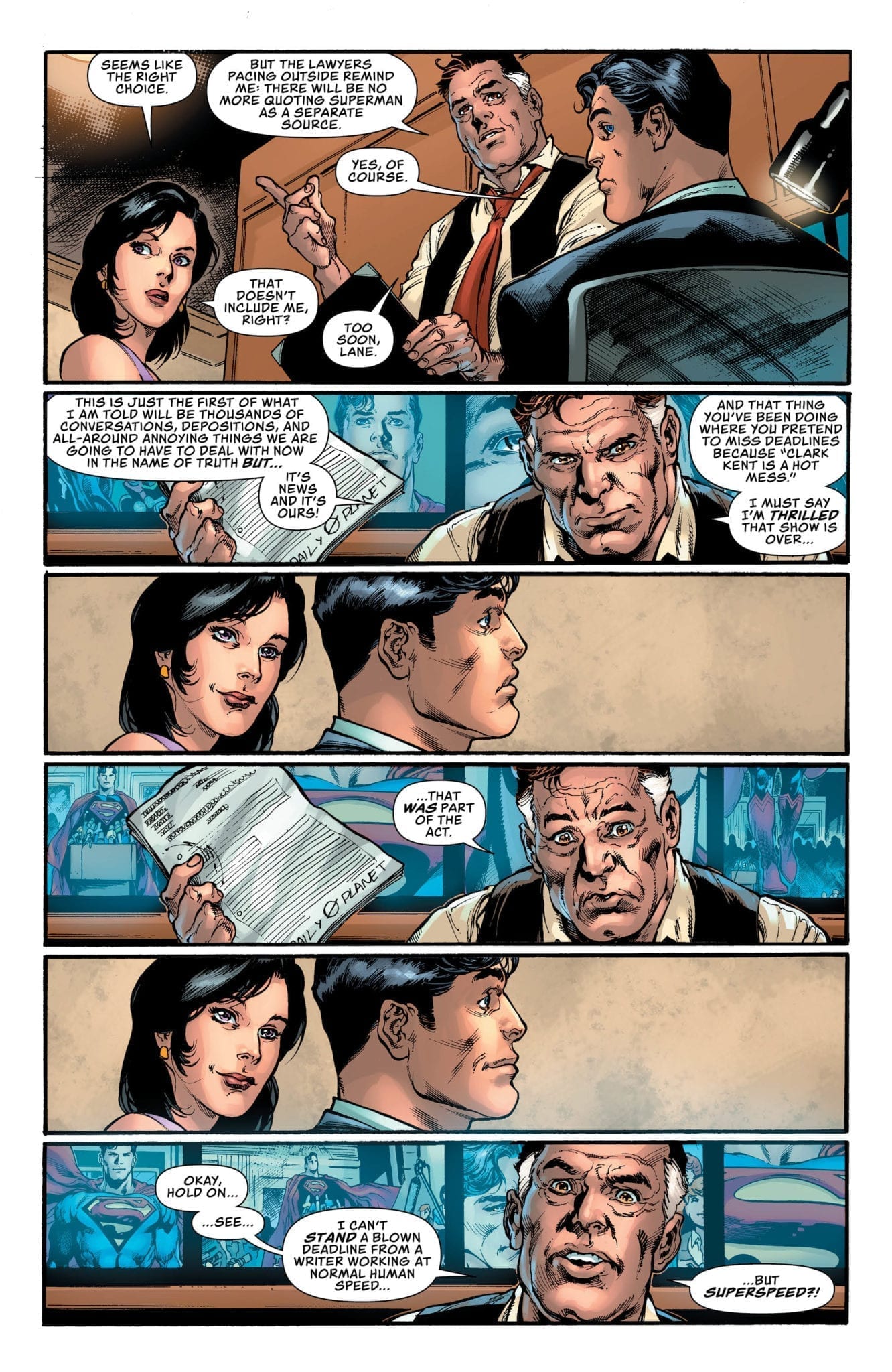 Andworld Design’s lettering often varies in size and style. As a result, many characters are given his or her own voice, and moments are given their own unique significance. In one scene, when a group of people begins to clap for Clark, the first clapping sound effect is smaller than the ones that follow. It’s so easy to hear the real-life equivalent of this happening, and the representation of it makes the moment feel real. Many alien races are given their own style of lettering and word balloons. This variety helps to set them apart and even makes it that much more fun to read a page.