HELLBOY & THE BPRD: THE RETURN OF EFFIE KOLB #1 Revisits the Past

Written by Mike Mignola, with art by Zach Howard, colors by Dave Stewart and letters by Clem Robins, Dark Horse’s Hellboy and the BPRD: The Return of Effie Kolb #1 kicks off a new chapter from old territory. The great charm of a hero like Hellboy is that he kicks butt, and somehow everything gets wrapped up. He stumbles unto his successes. But the question remains, do those problems stay solved? The creative team behind this new issue of Hellboy and the BPRD begin to answer that question.

While it’s essential first to do a quick re-read of The Crooked Man, Mignola’s new story carries its weight. Drawing directly from The Crooked Man, the first appearance of Effie Kolb, Mignola brings Hellboy back to the town where it all happened. Though years have existed between these stories, both in publication and in the Mignolaverse, the reentry is seamless. Mignola’s quiet style and quieter hero are a welcome return. Mignola achieves inter-character dynamics brilliantly. In as little as one issue, we sense a bond between the characters. Mignola asks us the question: Is the Crooked Man dead? And if so, what happens when evil leaves a void to be filled? The next issue promises to have answers.

Howard strikes a satisfying balance in this issue. While he recreates many of Richard Corben’s creatures from The Crooked Man, he somehow both emulates Corben and maintains his own style. And many of the new additions to the cast of characters, Howard gives an unnerving air of normalcy. Despite hints that some characters are secretly up to no good, Howard presents us with ordinary people. The terrifying implication being that evil knows how to hide itself away. Howard and Mignola work together brilliantly. As Howard chooses to approach Mignola’s characters with the same subtlety as the writing. 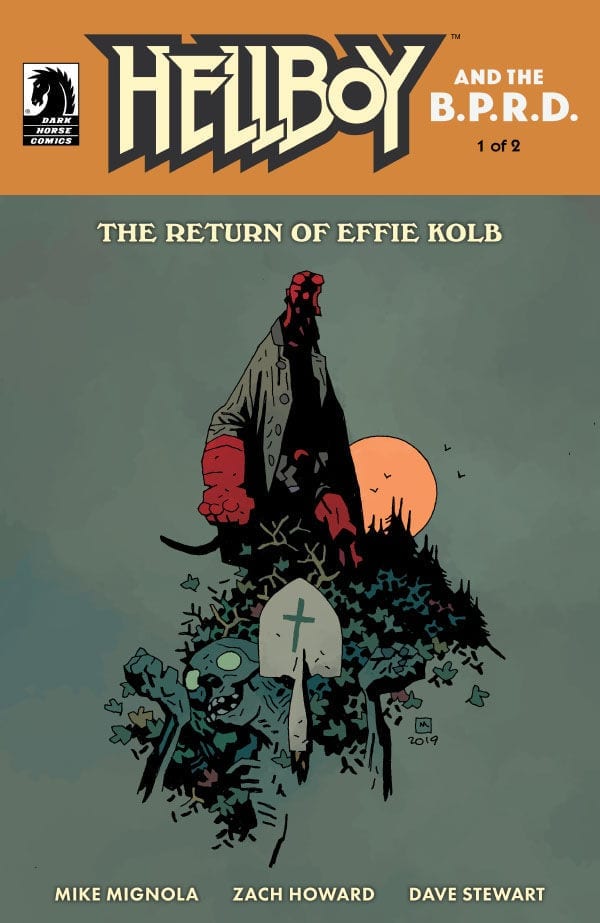 Stewart, long-time Mignolaverse and Dark Horse veteran, returns to Hellboy and the BPRD for more stunning work. It is Stewart’s coloring that makes Howard’s work seem like a balance between Mignola’s own art and that of Corben. The dark tones and overlaid shadows bring everything into familiar territory. But where Stewart strays from the usual, he shows his brilliance as a colorist. As the issue displays flashbacks to the events of The Crooked Man, Stewart colors flashback’s background in golden hues. Giving the sense that that was the Golden Age for these characters. And in one moment, as a character emulates his younger self, Stewart colors that panel in the same golden hues. This approach to the coloring connects us to the past story while continuing to tell a new one.

Robins’ lettering helps relieve some of the gloomy atmosphere of the issue. While the characters are having heart-to-hearts about the past and investigating the future, it’s the green and orange sound effects that give events a lightheartedness. Peppered throughout the issue, so as to never ruin the tone, the sound effects bring a sense of fun. Robins makes the lettering for the dialogue and the word balloons as small as possible and set off to the sides of each panel to make room for the art on each page. Robins has a deep understanding of the tone of this issue and helps to balance it throughout.