As the Sin-Eater continues to create chaos in Spider-Man’s life, the web-slinger faces a deeply emotional dilemma in The Amazing Spider-Man #48, out this week from Marvel Comics. About the book:
The Sin-Eater has been recruiting anyone who wants to help him bring “justice” to “sinners,” and an overwhelming amount of people have signed up for his cause. Now, Spider-Man has to deal with a mob of hate-filled followers while also questioning whether he should save the Sin-Eater’s next target, Norman Osborn. Spider-Man enlists the help of several other heroes with spider-powers to not only support him as he fights off Sin-Eater’s followers but also emotionally as he decides whether to save one of the worst people he has ever known.

Nick Spencer does a perfect job of inspiring emotion in the reader in The Amazing Spider-Man #48. The choice that Spider-Man is faced with is difficult to make with any villain, especially when the Sin-Eater isn’t killing them. By “cleansing” villains, it isn’t apparent that the Sin-Eater is doing anything wrong, but Spider-Man knows there will be unforeseen consequences in the future. By having the villain in question be Norman Osborn, the decision of whether to save him or not becomes so much harder. Miles Morales had the Spider-Man of his world killed by the Green Goblin. Gwen Stacy died because of the Green Goblin. If he continues to live, he will kill again. Having the decision Spider-Man has to make, be about Norman was such a fantastic choice, and bringing in other heroes to help him choose brought out all the emotion attached to the decision, and made the issue an utter pleasure to read. The conversations in the issue pulled easily at heart-strings since they were all based around deep history related to the characters, and the issue continued to build until the shocking conclusion that leaves you with a jaw-dropping cliffhanger. 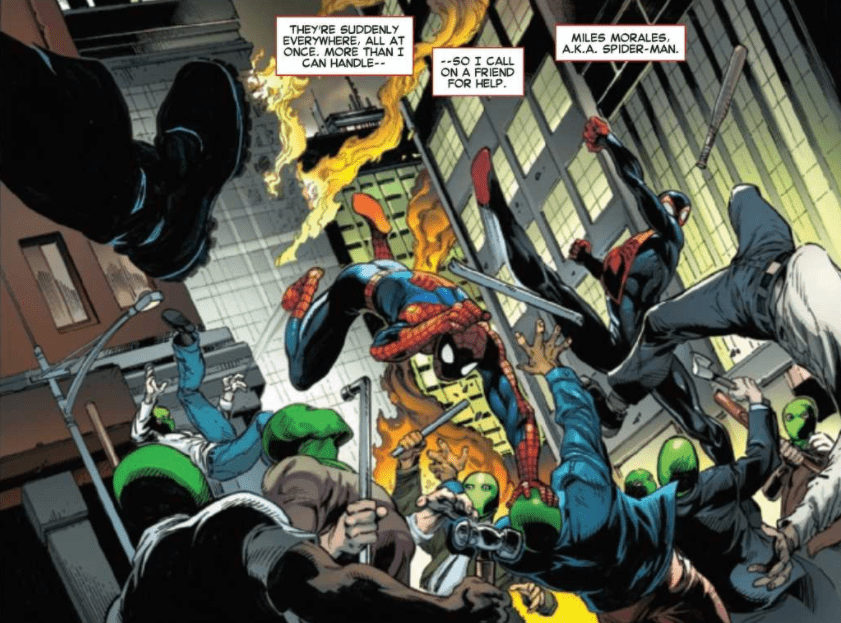 The pencils of Mark Bagely and the inks of John Dell once again come together to give us some astonishing art in The Amazing Spider-Man #48. The city contains so many beautiful buildings in the background, action sequences have so many dynamic poses and motion lines that they come to life on the page, and figures and objects often overlap the edges of panels, which causes them to stand out. Every page is a pleasure to look at, but perhaps the most important thing that Bagely and Dell are able to do in this issue is give the characters expressive faces. With so much of the issue focusing on the internal conflict of Spider-Man, it’s important to show it through facial expressions, and Ferreira and Poggi are able to do just that.

David Curiel does some great work in The Amazing Spider-Man #48, with many uses of vibrant colors that bring so much life to the page. The establishing shots of the city are particularly stunning, with a wide variety of colors being showcased. The use of bright colors in action scenes increases the energy of the scenes and the bright-colored backgrounds that Curiel chooses let characters pop out while they are performing certain actions.

The lettering of VC’s Joe Caramagna does an excellent job of presenting the dialogue in a way so that the story flows naturally. This is especially important for emotional scenes, such as the ones in The Amazing Spider-Man #48. Caramagna also provides many different colored sound effects during fight sequences, which highlight just how much fighting Spider-Man and his friends have to do to ward off Sin-Eater’s followers.

The Amazing Spider-Man #48 is one of the best issues to come out of the Sins Rising event, and that says a lot when you compare it to the quality of the other issues. The story is captivating throughout every page, and the art complements it all so well. By the end, this issue leaves you with your heart aching from the emotional conversations Spider-Man has with other spider-powered people and your jaw open from the awe-inspiring cliffhanger.

An utterly fantastic issue, full of many emotional conversation and beautiful drawn action scenes.Review: THE AMAZING SPIDER-MAN #48 - A Heart-Wrenching Dilemma