Review: TASKMASTER #1 – Captures The Tone Of An MCU Film

TASKMASTER #1, out this Wednesday from Marvel Comics, is the first issue of a 5-issue miniseries by writer Jed MacKay, artist Alessandro Vitti, colorist Guru-eFX, and letterer Joe Caramagna.

About the issue:
TASKMASTER HAS MURDERED MARIA HILL! Or at least that’s what the whole world thinks. Now the greatest spies in the business are hunting him down and won’t stop until Taskmaster is dead or clears his own name! 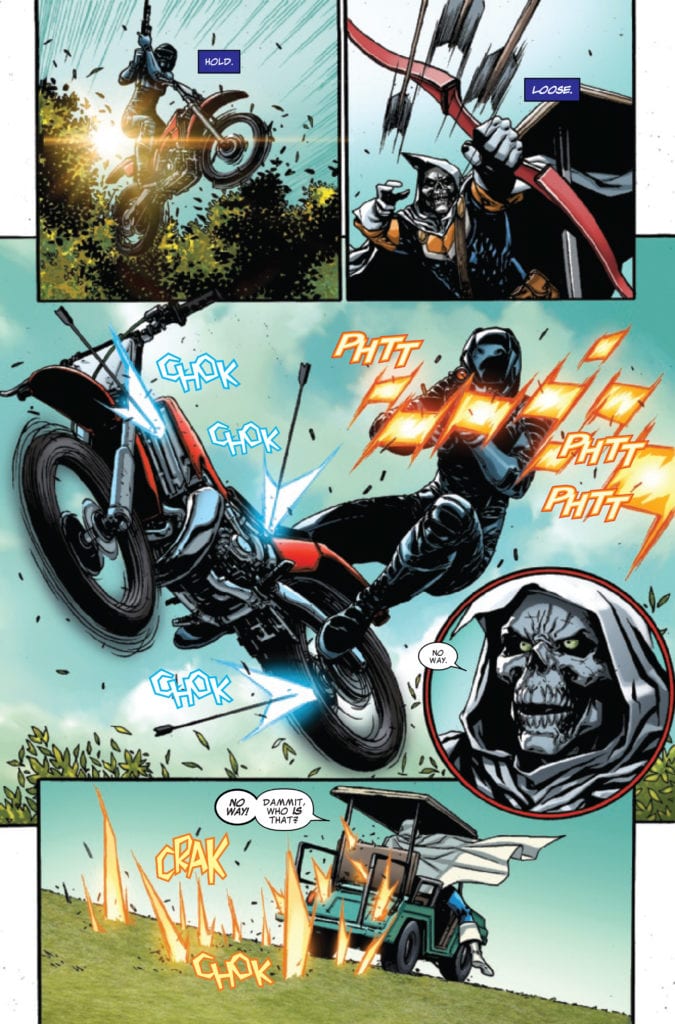 In a nutshell, what Jed MacKay set out to do with this book, he accomplished because TASKMASTER #1 is a whole lot of fun. It never drags out or feels boring. There is flawless chemistry between the main characters. The dialogue flows naturally. The action sequences and the funny banter manage to keep the readers engaged throughout the entire story and even get a smile out of them. Everything about this comic reads and feels like an MCU movie, which works well here.

However, MacKay’s greatest accomplishment is he makes the reader care about the supervillain and sometimes antihero, Taskmaster. By letting the reader get a glimpse into Taskmaster’s mind and his thoughts, we understand who he is. Taskmaster never comes off here as evil or malevolent. He just does what he does best to keep a roof over his head. The readers can understand and respect him for that.

There’s no better match to MacKay’s fun story than Vitti’s vibrant art. Everything about his artwork just feels so energetic and full of life. The acting looks incredible, the faces are well-detailed, and the angles and shot types Vitti chose to get a laugh or astonish the reader hit the mark each time.

Though his clever use of layouts to manipulate the reader’s feelings is highly remarkable. The chase scenes’ layouts are chaotic and alive, everything an action sequence should aspire to be, and the dialogue scenes are orderly and efficient; They calm the reader down and make them focus more on what’s being said, without pulling back on the details and hurting the artwork’s quality. 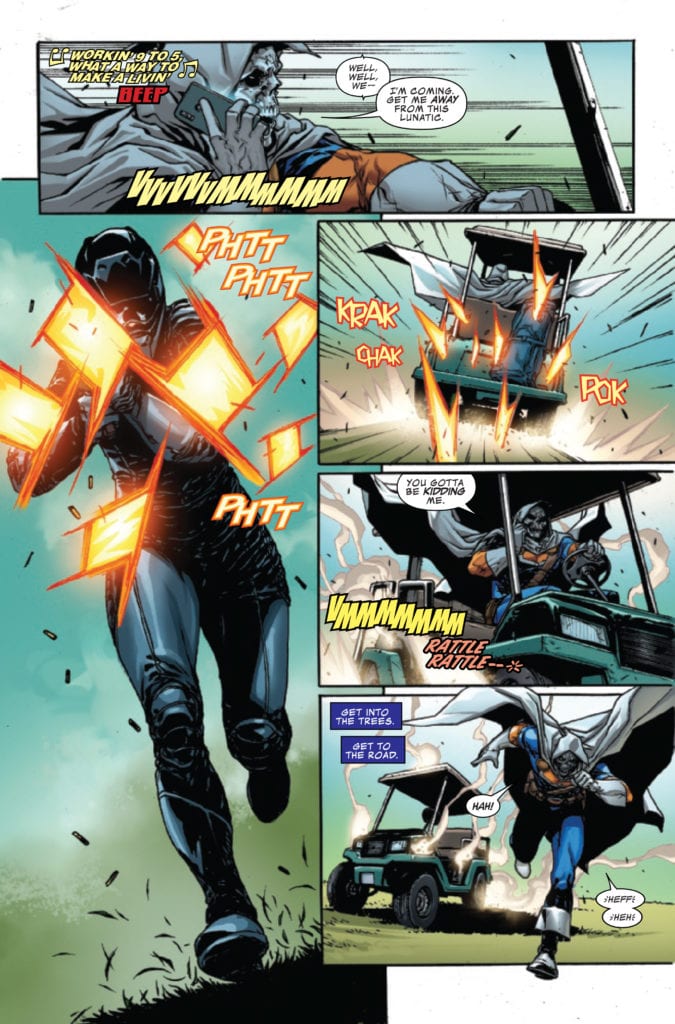 Guru-eFX’s coloring work is realistic in the best way possible, but it still manages to make the art pop and complement it. More specifically, the lights are colored beautifully. Whenever someone shoots a gun, it looks like real gunfire. Whenever the sun is shining in the background, you almost feel dazzled by how bright it is. Incredible work here from Guru-eFX.

Back in the day, there was an understanding that truly great lettering should go unnoticed. To this day, some people still believe it. But, with this comic, Joe Caramagna brilliantly proves them wrong. Caramgna doesn’t shy away and uses every chance he’s got to design some colorful, lavish sound effects and captions, making the artwork and coloring work look all the more alive and fun.

If you’re looking to read a comic book that beautifully captures an MCU movie’s tone, TASKMASTER #1 is the perfect book for you. The story is a hilarious adventure tale featuring one of the most likable portrayals of Taskmaster, and the artwork elevates the energetic writing. Highly recommended.

If you're looking to read a comic book that beautifully captures the tone of an MCU movie, TASKMASTER #1 is the perfect book for you. The story is a hilarious adventure tale featuring one of the most likable portrayals of Taskmaster, and the artwork elevates the energetic writing. Highly recommended.Review: TASKMASTER #1 - Captures The Tone Of An MCU Film