Marvel’s 2020 restart of their Star Wars comic line brings to bear a new story from the perspective of everyone’s favorite Sith Lord. Writer Greg Pak and artist Raffaele Ienco’s “Darth Vader” #1 is an emotional ride through the past during one of Vader’s most distraught periods. The heartbreaking callbacks are met by scenes of brutal devastation by the hands of the Dark Lord, making this first issue a treat for any Star Wars fan.

“In the shattering climax of The Empire Strikes Back, Darth Vader infamously reveals his true relationship to Luke Skywalker and invites his son to rule the galaxy at his side. But Luke refuses — plunging into the abyss beneath Cloud City rather than turn to the Dark Side. We all remember Luke’s utter horror in this life-altering moment. But what about Vader? In this new epic chapter in the Darth Vader saga, the dark lord grapples with Luke’s unthinkable refusal and embarks on a bloody mission of rage-filled revenge against everything and everyone who had a hand in hiding and corrupting his only son. But even as he uncovers the secrets of Luke’s origins, Vader must face shocking new challenges from his own dark past.” 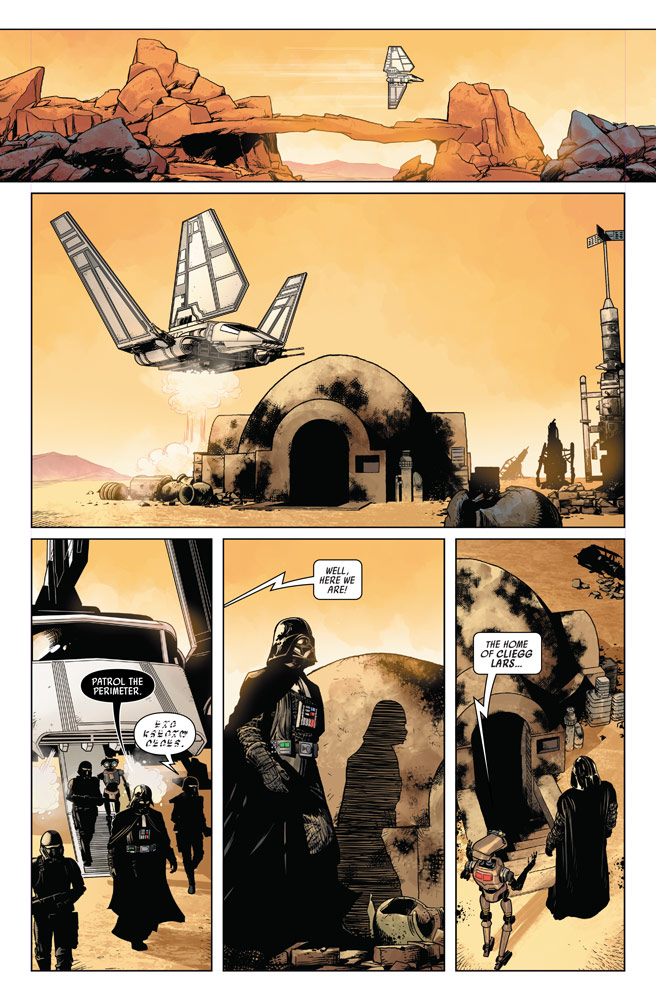 There is a massive two-fold challenge to writing a comic such as Marvel’s “Darth Vader.” The first obviously being planting your flag as a writer into one of the most beloved universes ever created. The other, specifically as a comic writer, is following up two other fantastic writer’s runs on the same character. Kieron Gillen and Charles Soule each crafted a Vader story at pivotal times in the Star Wars timeline. Fortunately, Greg Pak appears to be more than up to the challenge. He begins his Vader story in this first issue reflecting on the past, both in regards to the events of The Empire Strikes Back and the pre-Empire past of Anakin Skywalker. Pak understands that the key to writing the character of Darth Vader is that he is a character rooted in the pain of guilt. His rage is almost entirely at himself, and he lashes out against his supposed enemies as a reflexive action. Pak hones in on Vader’s simple actions via complex emotions through the many flashbacks and nostalgic scenes in “Darth Vader” #1. Admittedly, this issue is largely comprised of flashbacks that work to get the reader into Vader’s head. This works for a character of few words and massive, brutal actions. The supporting character, an information analyzing droid, works basically to provide exposition in a creative way. Despite its reliance on past Star Wars knowledge to provide the emotional core of its storytelling, Pak manages to write an emotionally compelling and highly engaging Vader story that promises more original plot points as the series continues. 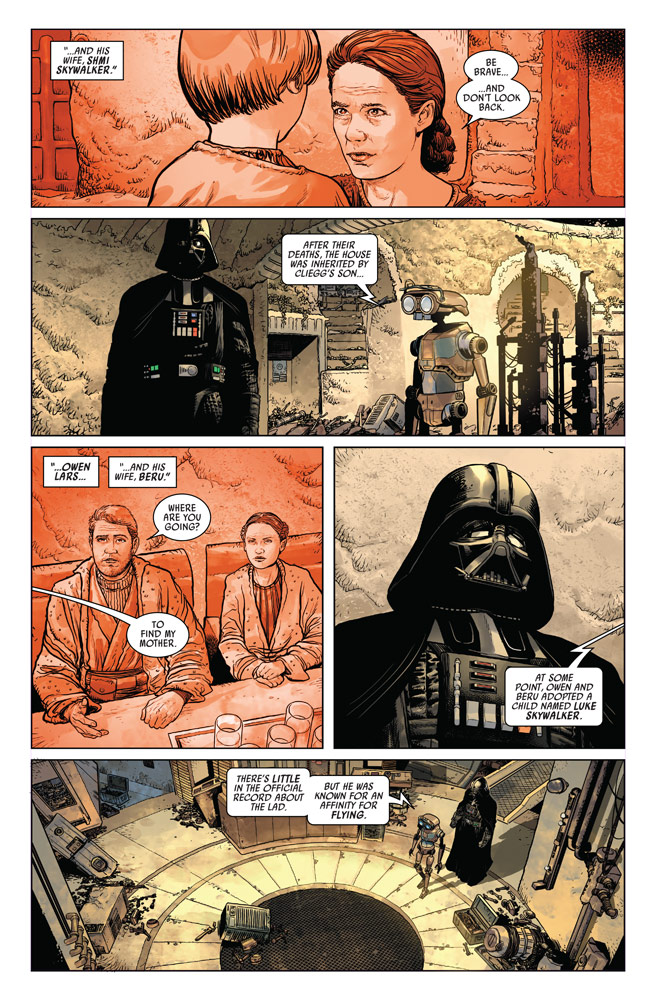 Marvel has always managed to bring top-notch artistic talents to the table when it comes to their Star Wars comics. This trend holds true with Raffaele Ienco‘s pencils on “Darth Vader” #1. There’s a fantastic blend of character and architectural work that brings out the exact visual variety and authenticity needed for stories in the long-running franchise. Ienco’s representations of Star Wars characters from the past look excellently faithful. His renderings of classic locations such as the Lars family moisture farm are both spot-on and properly weathered as time has passed. Mosty importantly, Ienco’s Vader is one of the best had in all of comics. The immaculate suit detail combined with the menace of his size and expressionless masked face represents the iconic character perfectly.

The colors from Neeraj Menon bring life and dimension to the Star Wars universe in often subtle yet highly effective ways. The look that Menon uses is noticeably grounded approach, which is likely why this comic’s aesthetic is so easily engaging. The colors work in tandem with the pencils and inks to create a textured look to the environment so they look more realistic and cinematic. This is actually a method used in most Marvel Star Wars comics, and it’s easy to see why. Everything from the sun-baked surface of Tatooine to the sanitized black of a Star Destroyer’s bridge looks exactly like it does in the films, just with a spot-on artistic rendering. There’s expert work here in the gradients and shades used by Menon, aiding the atmosphere of this comic and helping to make it so easily enticing. 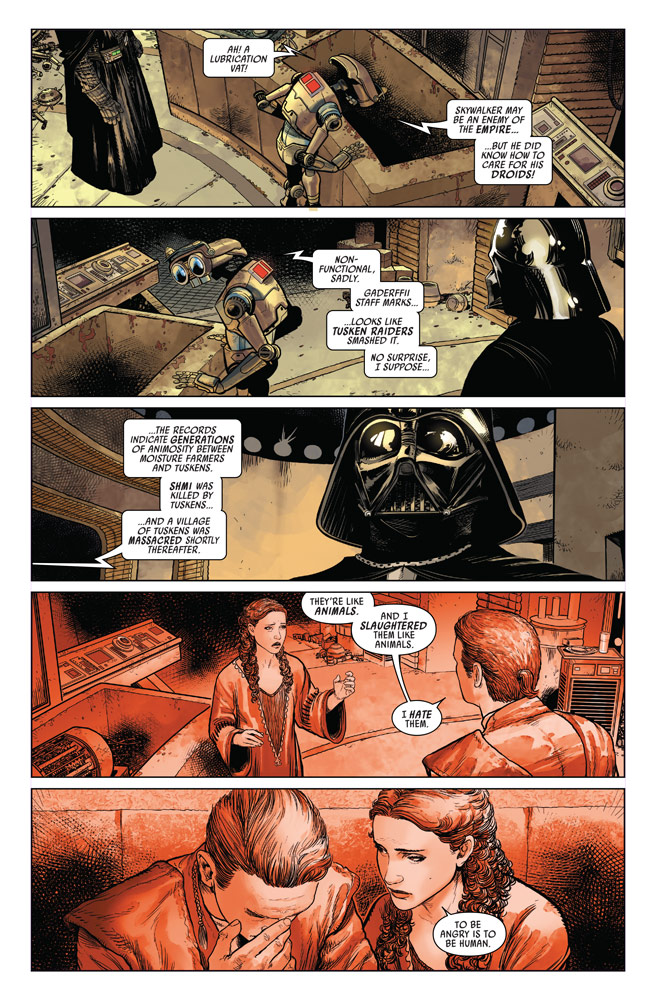 “Darth Vader’ #1 is a look into the side of an iconic villain that hasn’t really been seen. Pak’s examination of Vader’s psyche during one of his most vulnerable moments makes for an emotionally hard-hitting read with more surprises to come. The visuals from Ienco and Menon breathe a familiar universe to life with authenticity and stellar talent. Any Star Wars fan needs to have this in their pull list on 2/5!

7784
Find out how to get the
Monkeys Fighting Robots magazine!

Review: BOLERO #1 – Angst, Heartache, And Doing It All Over Again