Previous articleThe End of Another War in FIREFLY #12
Next articleWONDER WOMAN: DEAD EARTH #1 Rushes Past Its Own Brilliance
December 18, 2019

It was 30 years ago this week that The Simpsons debuted as a half-hour sitcom. In those three decades, the animated TV series has hatched catchphrases like “Doh!” “Eggs-ellent,” and “Smell you later,” to name a few. But perhaps most pertinent to readers of this site is: “Worst episode ever.”

That indelible line belongs to “Comic Book Guy,” owner of Springfield’s Android Dungeon comic book store. (After more than two decades with no given name, the character revealed it, with a comically annoying lack of fanfare, as Jeff Albertson.)

Overweight, opinionated, and possessing an elephantine memory that allows him to criticize his favorite TV shows in granular detail (“In episode 2F09, when Itchy plays Scratchy’s skeleton like a xylophone, he strikes the same rib twice in succession, yet he produces two clearly different tones…”), the character represents the worst of comic-con nerdom.

As the series approached its latest milestone, I began to wonder: What do real-life comic book shop owners think about the character? He’s a gross exaggeration, right? Or is he eerily accurate? Or both? And so, making the rounds of my local comic book shops, I posed those very questions.

“That dude 100 percent exists,” said Dan Palomares, manager of Comicopia in Boston. “I’ve seen that dude, in this space.”

Frankly, I was expecting a little more hedging, but Palomares’ was one of many such unvarnished comments I heard. “Actually, it’s a pretty accurate depiction,” said one cashier (the only one of my sources who requested anonymity). The consensus was that the know-it-all-ism depicted by Albertson (as no one calls him) is indeed representative—at least of a subset of comic book fans.

In fact, I even stumbled upon the tantalizing possibility that Comic Book Guy existed, in flesh and blood, and once waddled the streets of Cambridge, Massachusetts. There, in Harvard Square, at Million Year Picnic, New England’s oldest comic book shop, owner Tony Davis explained. 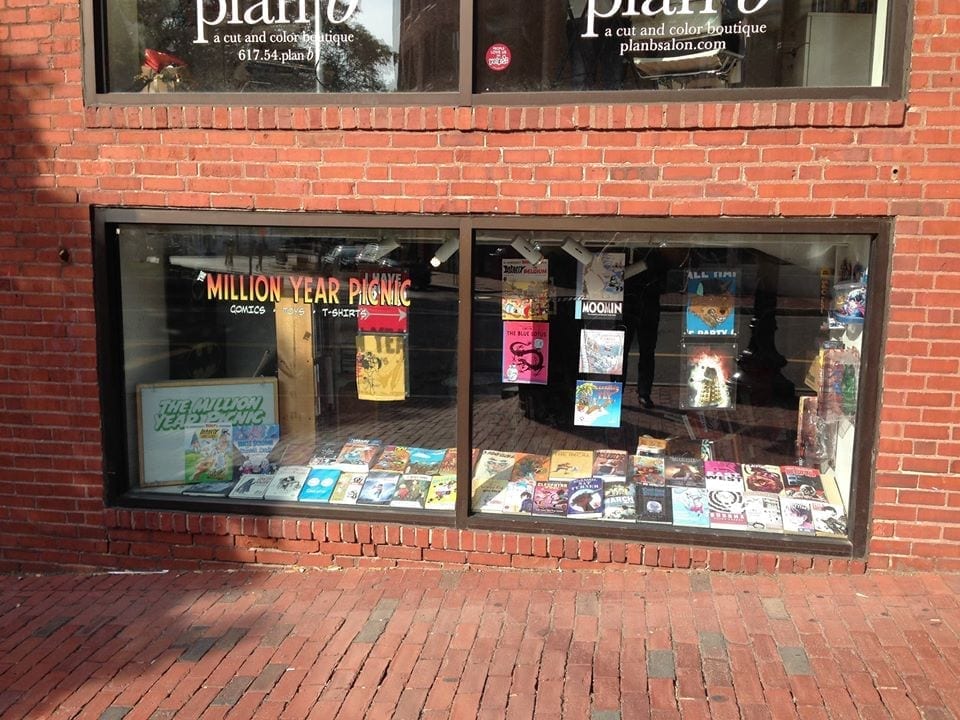 “There was a guy, Hans, who worked here at one point, who claimed that he was the inspiration for Comic Book Guy,” said Davis. “Hans was a young, heavyset guy with long hair. And he would judge customers’ choices, out loud.”

There does sound a semblance. But how, in Hans’ view, did the Simpsons writers discover him? Simple. “A lot of the Harvard Lampoon guys [e.g., Conan O’Brien], who later went on to The Simpsons, used to shop here.”

Could Hans be right? Davis himself had doubts. I would have to seek the truth from a writer or producer of the show.

But before we get to that, note what Davis said about Hans “judging customers’ choices, out loud.” Confronting shoppers with a haughty attitude seems like a bad business practice, but when it comes to comic books, it’s not altogether unexpected. To be sure, none of the folks I interviewed, in the fall of 2019, had anything like that attitude, and yet somehow all felt that the character rang true. Maybe it’s because comic books inspire more passion in people—sellers and consumers—than other products. 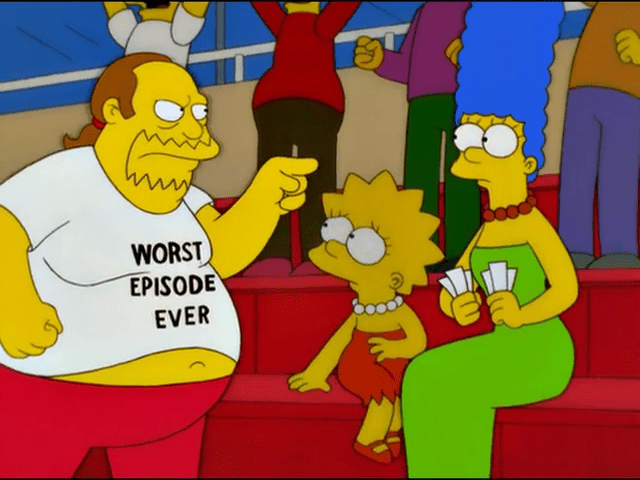 Well, most other products. An obvious parallel came up in my conversation with that one anonymous cashier. When I asked if he had a favorite Comic Book Guy line, he said, “The classic, ‘Worst episode ever.’ That just distills that nerdy putting everything down even though you love it. It’s something you love, but you just feel compelled to crap on it. It’s making people feel bad for what they’re into.”

As soon as he said this, I thought of Jack Black’s hyper-critical, more-knowledgeable-than-thou record shop clerk in High Fidelity.

“Yes,” Anonymous agreed. “It’s levels of gate-keeping, ‘Keep out of my subculture.’ Trying to make it seem too complex to outsiders. I don’t get that mindset. I’m excited if I get to clue someone into something cool.” 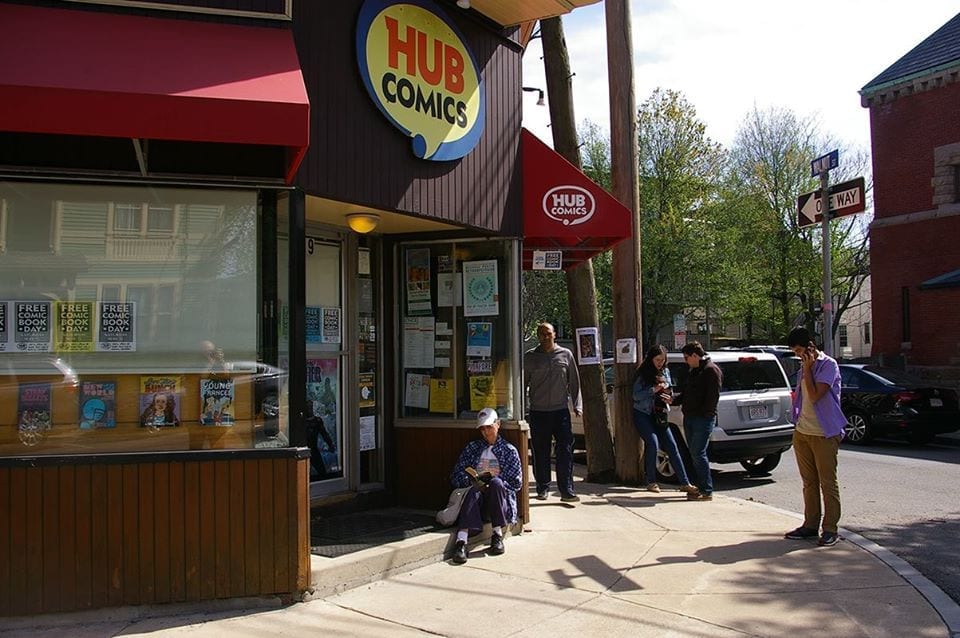 Funnily enough, Jack Black later appeared (or his voice did) on The Simpsons as the rather friendly, welcoming owner of a rival, hipster comic book store, across the street from the Android Dungeon. Jesse Farrell, manager of Hub Comics in Somerville, clued me into this episode I’d missed. (Season 19, episode 7, if you’re keeping track. It included this priceless tidbit: Milhouse asking Alan Moore to sign a copy of Watchmen Babies in V for Vacation.)

“I think we’re more like that store,” Hub’s Farrell said. “It was a correct, up-to-date stereotype.”

“I experienced this moment of comic book shop solidarity,” Farrell related. “I was at New England Comics in Brookline, and on the TV, a ‘Treehouse of Horror’ [Halloween] episode was on. There’s a part where Comic Book Guy is walking down the street, reading an issue of Aquaman and saying, ‘But Aquaman, you cannot marry a woman without gills. You’re from two different worlds!’ And then he sees a nuclear missile heading his way and says, ‘Oohh, I’ve wasted my life.’

“The entire store just burst out laughing,” Farrell said. “It was an amazing moment of unity.” (Comicopia’s Palomares, too, said this line was one of his favorites.)

Speaking of unity, across town at the aforementioned New England Comics in Brookline, Riley Villiers—the youngest, and the only female staffer who happened to be behind the register at any of the handful of stores I visited on my unscientific expedition—had the most encouraging news.

Compared to when Comic Book Guy was created in The Simpsons’ early days, “there’s not the same kind of consumers or gatekeepers anymore,” Villiers said. “The audience has broadened, and we don’t have the same kind of gatekeepers in the industry—as in, the people higher up. It used to be exclusively for boys, but now I think the publishers do a better job of making comic books inclusive for all genders and other backgrounds.”

Okay, the suspense has gone on long enough. What about Hans and Harvard Square? I got in touch with Mike Reiss, a Harvard Lampoon alum who was one of the first writers, and later a producer, of The Simpsons. (Highly recommended for comedy fans: Reiss’ memoir, Springfield Confidential.) My question: was Hans the inspiration?

“Comic Book Guy was simply an archetype,” said Reiss. “When I go to Comic Cons, the crowd looks like it’s 15 percent Comic Book Guys. People have speculated that the voice is imitating animator Ralph Bakshi, but it was purely an invention of Hank Azaria. We figured he’d be a one-shot character, which is why we didn’t even give him a name.

“There’s no Harvard connection,” Reiss added. “Interestingly, long after we’d created the character, I met his double working in a comic book store 100 yards from our Simpsons offices.”

Have you met a real-life Comic Book Guy? Or do you have a favorite line of his? Post it in the comments below. (Here’s mine: “This is a rare photo of Sean Connery signed by Roger Moore. It is worth $150.”)

Image Comics has unveiled the first look at their new series Adventureman, from the all-star team of writer Matt Fraction and artists Terry and...
Read more