Actor George Takei disagrees with those behind Star Trek Beyond in making the Enterprise’s helmsman, Hikaru Sulu, the role he made famous on the original series, gay in its recent incarnation.

Actors John Cho (who plays Sulu in the latest films), Simon Pegg (who plays Scotty and helped pen the script), Zachary Quinto (who plays Spock and gay, himself), and director Justin Lin all assert it’s a tribute to the man behind the character.

Takei, who came out in 2005 and subsequently became a prominent activist in the LGBT community, says the decision to make Sulu gay twists creator Gene Roddenberry’s vision of the character. He also says Roddenberry envisioned the character as a heterosexual and was always one.

While Takei says he is excited for the inclusion of a LGBT character, the focus should have been creating a new character who always embraced being who he/she is. By making Sulu gay now, it appears he was closeted, which Takei, himself, was most of his life.

I can see Takei’s argument and I think it should have been established in the 2009 reboot. We never really got to explore any specific background of the characters outside of Kirk and Spock. We got to see them as children before growing up. We don’t really know much of the characters outside the fact McCoy had an ex-wife, Scotty was stuck on a Federation outpost, Uhura has an intimate relationship with Spock and enjoys beers, Sulu is a fencer and Chekov was just thrown in as a kid prodigy. Effort on exposition could easily been established, but director J.J. Abrams was focused more on the action and establishing the two principle characters. He had all this time to establish who the other characters were aside from the immediate setting, but chose not to.

“We could have introduced a new gay character, but he or she would have been primarily defined by their sexuality, seen as the ‘gay character,’” Pegg writes.

The Star Trek universe was revolutionary for the time as each principal character represents the world with Kirk and McCoy representing North America, Uhura for Africa, Chekov for Russia, Scotty for Europe and Sulu for Asia. When Takei praised the idea of inclusion of the world to Roddenberry, he inquired why there weren’t any LBGT characters introduced. Roddenberry replied the world wasn’t ready for that, yet citing the lowest ratings for the show for the original series episode, Plato’s Stepchildren, which featured the first interracial kiss on North American TV with Kirk (William Shatner) and Uhura (Nichelle Nichols). The episode was the lowest rated, because of a number of NBC affiliates in the South refusing to air the episode. 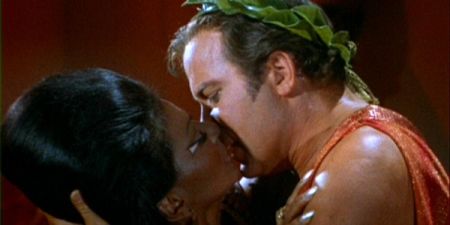 Isn’t the problem with Star Trek is not having any featured LGBT characters as part of the cast with five TV shows and 10 films? With a sixth TV series exclusively online which we have no idea what the cast is going to be and the 11th film finally making something of substance to have representation, I can see current feelings the way they are.

Pegg’s argument is he doesn’t want the new character to be subjected by tokenism, but wasn’t that what Star Trek was built on? How many other Blacks, Asians, Latinos, or Native Americas were on the show outside of their lone representations in the principle cast during the original series’ run? Did the characters grow with the audience to be accepted outside their labels?

While I can see Pegg’s concerns given Hollywood’s issues with multi-ethnic representation, I can see Takei’s point and this is the very reason why you make strong characters and build them with layers so they can be defined beyond just their labels. I can also see Pegg’s point any changes made to existing characters are made for an alternate timeline since we never saw the Uhura and Spock relationship materialize like it had in the primary timeline.

Ultimately it is the line between legacies and creative liberties. Takei and Roddenberry created Sulu and what has been defined for the character will always be there. At the same time, you have those like George Lucas, who moved on from Star Wars and passed the torch to a new generation to expand his franchise. The same can be said about Star Trek and the current generation trying to move the franchise forward while expanding and retaining interest.

347
Find out how to get the
Monkeys Fighting Robots magazine!

Tom Chang
Sci-fi and technology geek since the NES days, Tom loves everything from the cult classics, the contemporary hits to the beast with two backs that is Disney and Marvel. His life's mission is to be the ultimate nerd savant sitting on the iron throne as CEO of Skynet while masquerading as a vigilante at night wearing hockey pads.

Enter for a chance to win a pass for two to the advance screening of Disney and Pixar’s ONWARD - In Theaters March 6! Monkeys...
Read more
Comic Book Reviews

Children are dying and a new face in town is causing problems in Something is Killing the Children #2, out this week from Boom Studios. Written...
Read more
Comic Book Reviews

The Joker takes a friend out for a wild night on the town in Joker: Year of the Villain, out this week from DC...
Read more